This is the sixth post in a series commissioned for The Drawing Center that expanded  on topics related to the exhibition Lebbeus Woods, Architect, which was on view in our Main Gallery from April 17th – June 15th, 2014. The form is inspired by Lebbeus’ own masterful and insightful blog which can be read here. The first five posts are available: here, here, here, here, and here.

THE STATE OF HOSPITALITY

Responding to the invitation to reflect on the ‘state’ of five concepts, a group of friends who never sat down together but sat, at various times, at the Downtown Manhattan table of Lebbeus Woods, wrote blog entries between April and July of 2014 for The Drawing Center. The reflections address a small part of the glossary relevant for both Lebbeus’ and their own practices. The topics included The State of Things, The State of Science Fiction, The State of Usefulness, The State of Beauty, and The State of Educating, the Senses.

The exhibition Lebbeus Woods, Architect was initiated and curated by Jennifer Dunlop Fletcher and Joseph Becker, of SFMOMA. Following its premiere in San Francisco, the exhibition toured to the Eli and Edythe Broad Museum in East Lansing, Michigan, concluding its journey at The Drawing Center in New York. The exhibition’s origins can be traced to a series of conversations between the curators and Lebbeus, conducted at the same table shortly before he died.

When asked what he would want to see in the show, Lebbeus had a brief answer: “If I wanted to see what I want to see, I’d be bored. Why not wait and see what you want to see?” He may have known more than any of us knew, there and then. Still, the statement was not an anomaly; it was at the core of his logic of hospitality. 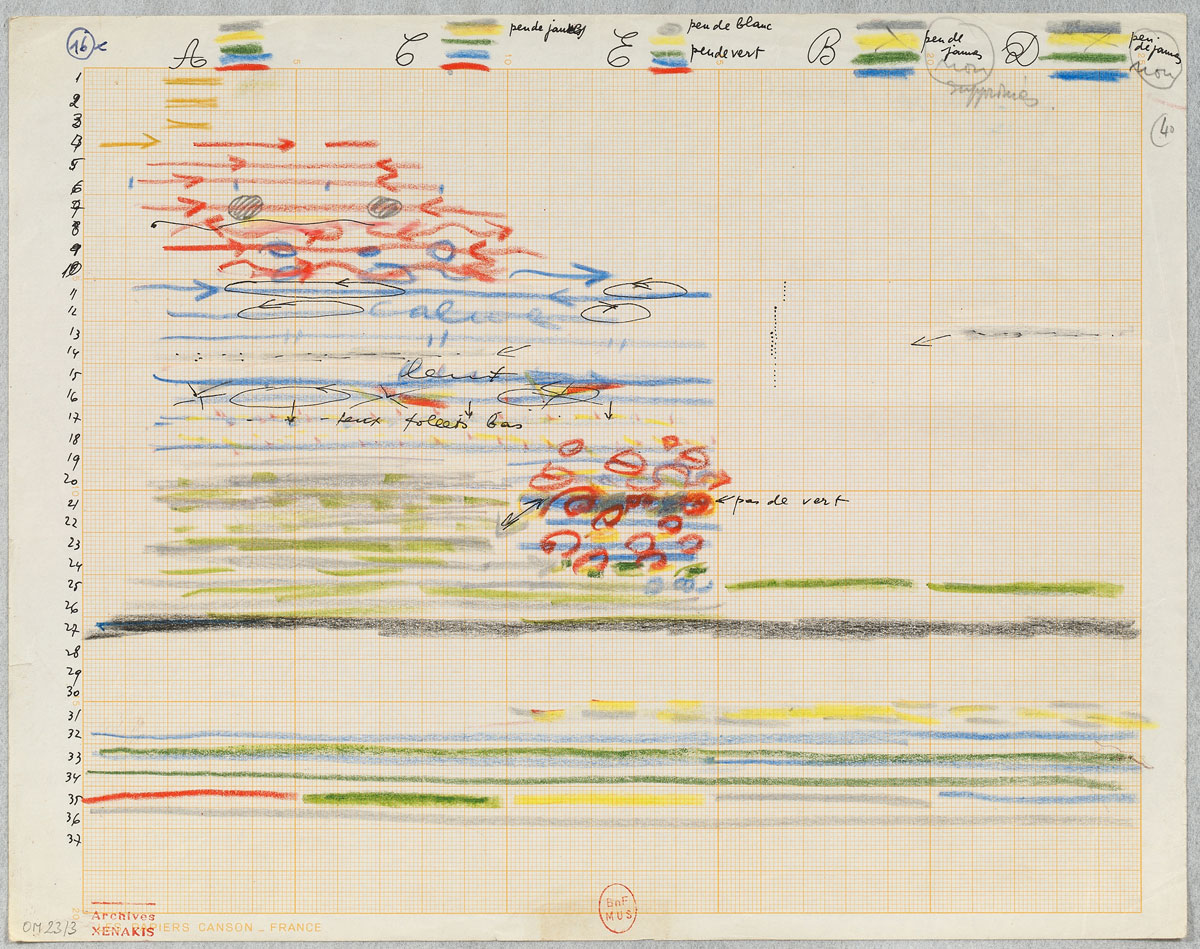 I am writing this on the birth date of the man who wrote On Hospitality almost two decades ago. Jacques (b. July 15, 1930 in French Algeria) Derrida’s 1997 text on ‘nature’ and limits of the term, is a profound inquiry into what we mean—and choose to ignore—when making a claim of being ready to be hospitable. Derrida reminds us that the duty of hospitality is formulated in and by legal language. A person for whom such language is foreign will have to suffer “the first act of violence,” by having their speech translated into a legally comprehensible request.

Derrida asks, “If he was already speaking our language, with all that that implies, if we already shared everything that is shared with the language, would the foreigner still be a foreigner and could we speak of asylum or hospitality in regard to him?” (On Hospitality, 15 – 17).

Startling as it is, this question is only a part of the foundation on which to rest the dwelling. A foreigner—confined to always being a foreigner—is still a nameable creature, a subject to the law and thus to the pact of hospitality. But what of those, asks Derrida, who are the unknown, the anonymous other? What of an absolute hospitality that would require my opening of the home, my letting them arrive “without asking … either reciprocity (entering into a pact) or even their names?” (25)

I cannot know your name. Nor can you know mine, are few of the last lines of the manifesto leading to War and Architecture (1993). Hardly an anonymous other, Lebbeus nevertheless managed to see, with understated clarity, that his trial would lead to the first act of violence, a slow death—through translation. No wonder he chose, and stayed with, a “different set of rules;” with a pharmakon all his own. 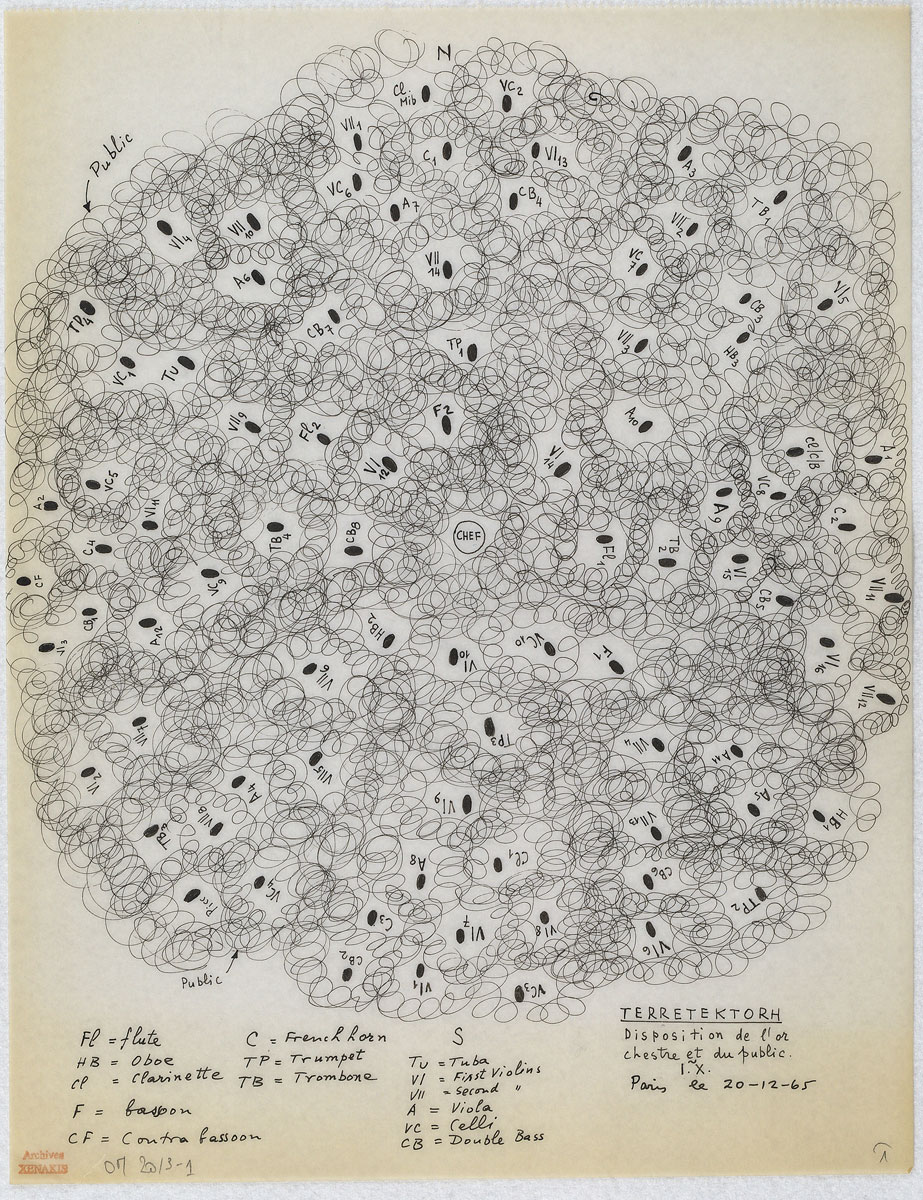 In a recent contribution to the symposium concerned with the work of Lebbeus Woods, held on June 28, 2014, at The Tchoban Foundation in Berlin, the architect, Zvi Hecker, wrote:

“I am always quite amazed by the enormous circle of friends a great artist acquires after his departure from this planet … amazed to see so many people speaking so highly of the man, the architect, the thinker—though one couldn’t find a single investor ready to realize even his smallest designs … When speaking of Lebbeus, one should remember that in his lifetime he was appreciated by his colleagues and by his many students, but … dismissed by what we call … our own architectural profession.” That may be the underlying meaning, as well as the effect, of our language, with all that that implies. 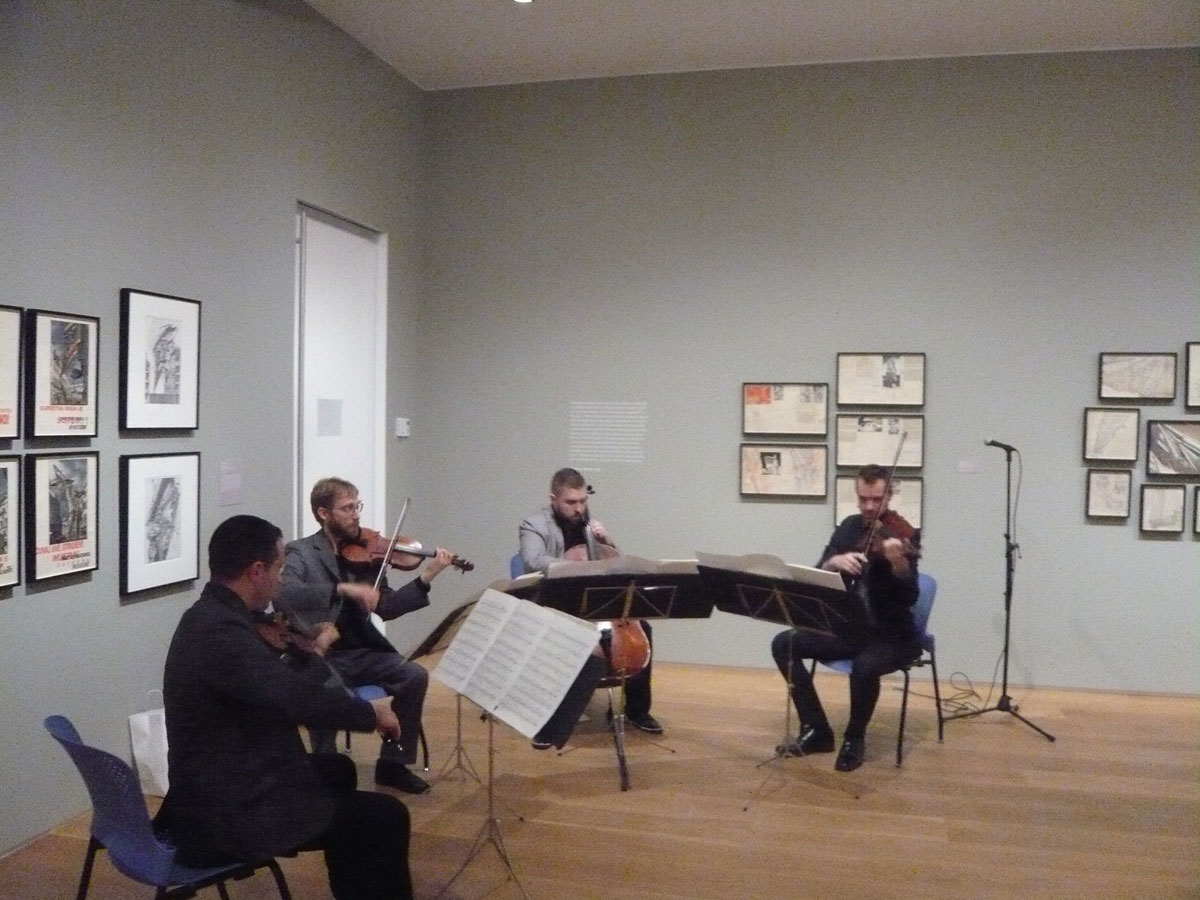 JACK Quartet performing at the Lebbeus Woods, Architect exhibition at The Drawing Center on May 8th, 2014.

Instead of practicing such forms of language acquisition, Lebbeus was interested in the kind of hospitality he deemed generative to both parties in a potential encounter. His devotion has been to the mind’s hospitality to an idea and/or to a sensation; to a viewer’s imagination—not his own. Seeing as thinking, not seeing and thinking. Music over the ‘plastic.’ Poetry over ‘prose.’ Beauty over its denial. Intimacy over publicity. Questions over answers.

The fish over the fowl.

As Chris Mann put it, What would the end Be if it wasn’t the Romance of the end?

— Aleksandra Wagner teaches at The New School for Public Engagement and is a psychoanalyst in private practice. Lebbeus Woods granted her an absolute hospitality, on September 17, 1991.