Hanne Darboven’s Kulturgeschichte 1880–1983 [Cultural History 1888–1983], 1980–83, currently on view at Dia:Chelsea’s 545 West 22nd Street location in New York City, is an important piece from the museum’s permanent collection, which has not been exhibited for over a decade. The 1,590 identically framed works on paper that cover the walls of the gallery space are organized in a grid, a floor-to-ceiling matrix. The framed materials range in content drastically: historical newspaper clippings from her native Germany; photographs of celebrity pin-ups and various New York doorways; excerpts from Darboven’s musical scores; and clippings from Postwar European and American art magazines are among the materials on view. 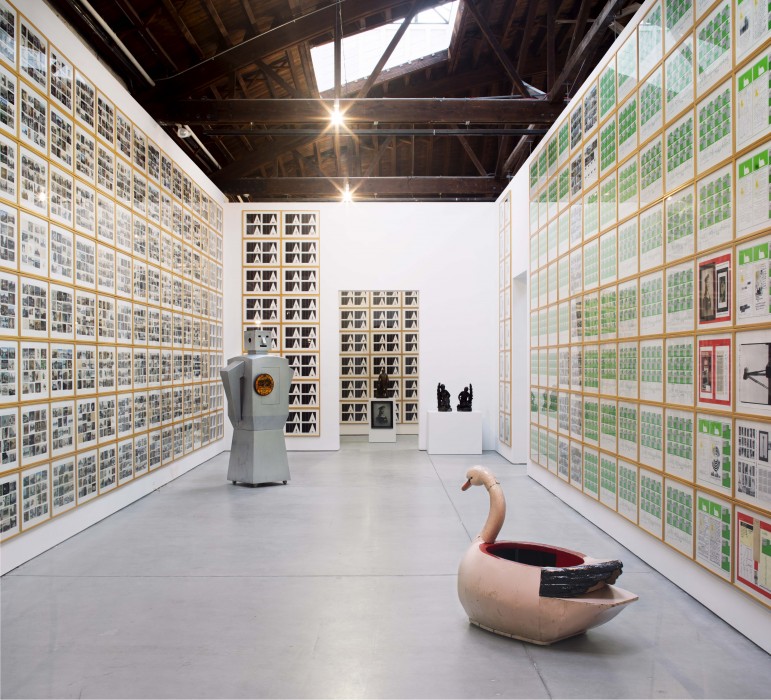 Darboven, who was a visual artist, a composer, and a mathematician, is often associated with Conceptual and Minimalist artists, in particular Sol LeWitt, Carl Andre, and Joseph Kosuth whom she befriended while visiting New York in the late-1960s. Minimalist systems—repetition, time, and institutional critique—are present in her work, but the content of Darboven’s installations is anything but minimal. While LeWitt, Andre, and Kosuth are known for creating works that are characteristically clean, Darboven’s work, which often includes found objects and the artist’s hand-writing, reflects her open-ended collecting practice (some would say she was a ‘hoarder’).

The high level of organization within the exhibition is immediately noticeable on entering the space. The work has a humbling effect, like the feeling of entering a vast library, although slightly more ominous due a lack of a decipherable logic. Similar to LeWitt’s gridded drawings, Darboven’s work is decentered and does not direct viewers’ attention toward any particular part of the composition.

By framing the objects, ephemera selected by the artist for seemingly random reasons, Darboven raises each to an unusual level of cultural prestige. In addition to instilling the project with levity, the frames play an equalizing role. One finds political news clippings alongside images of Andy Warhol paintings and instructional manuals for weaving floral patterns. Stripped of their context, we are left to form connections, patterns, and assign value to the various materials on our own, from scratch.

One is at first tempted to look for a way to interpret the immense complexity of the installation, to decode the cultural statement ostensibly embedded in the work. Once I started to take a more personal approach to Darboven’s Kulturgeschichte 1880–1983, and regard it wholly as a visual work of art, my observations began to feel like an integral part of the work. In Darboven’s Kulturgeschichte 1880–1983, in which politics and high- and low-culture are approached as separate but also inextricably linked, Darboven creates an analogue for life as an open-ended, abstract, and at times very confusing experience.