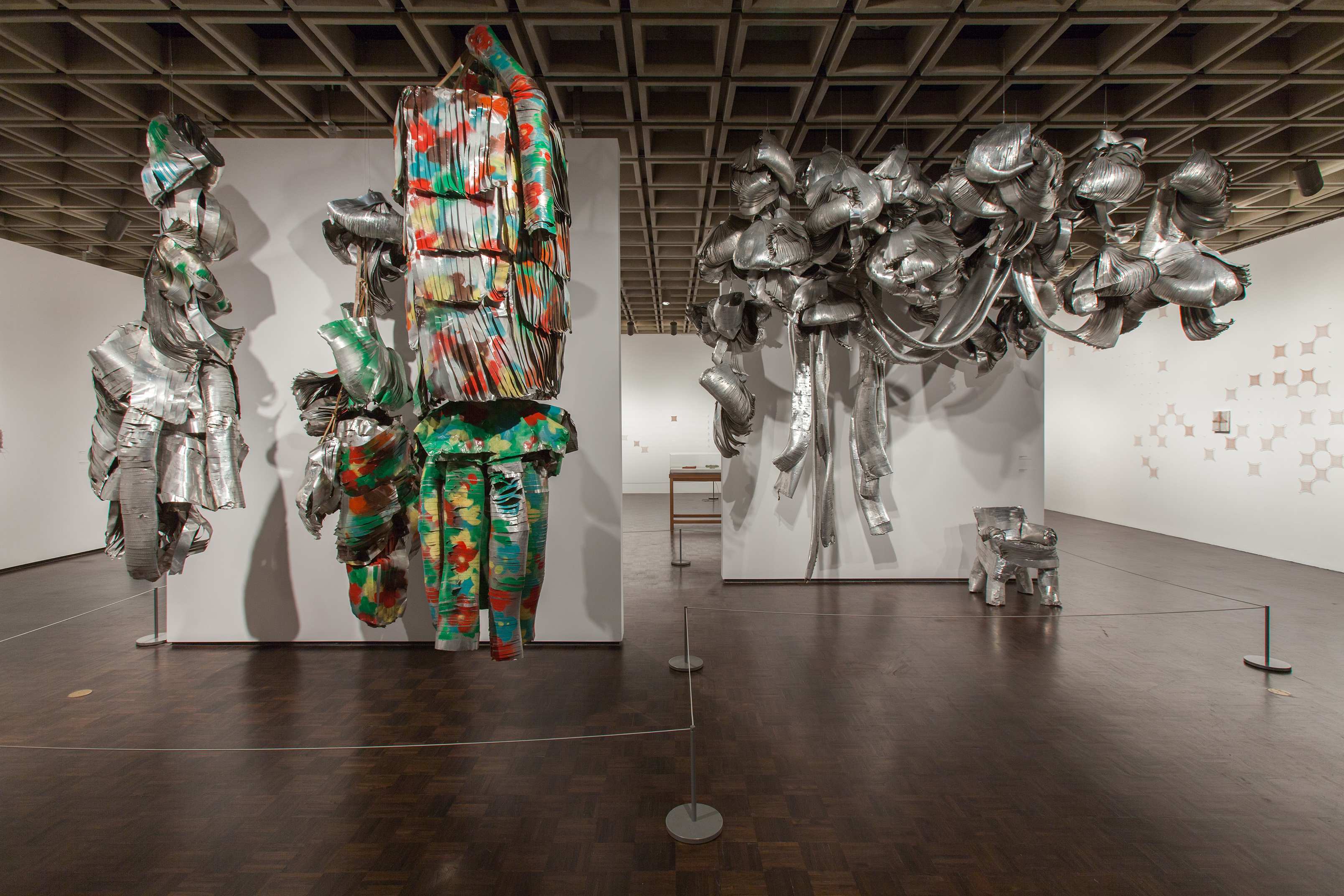 Marisa Merz, The Sky Is a Great Space, installation view, 2017. Courtesy the Metropolitan Museum of Art.

The Met Breuer’s current exhibition Marisa Merz: The Sky Is a Great Space—on view in the museum’s second floor gallery—presents the Italian artist Marisa Merz’s ascendant art practice from over five decades. Born in 1926 in Turin, Merz was, until now, commonly associated with her husband, Mario Merz, both of whom were involved in the Arte Povera movement during the 1960s and 70s. Arte Povera, the Italian response to consumerism engendered by the Marshall Plan-backed economic miracle, radically favored less sterile, more commonplace materials such as wood, wax, wire, old clothes, metal foil, and rocks in order to critique the commodification of art. The dozen or so Italian artists associated with the avant-garde movement—Merz being the only woman—sought to reify the importance of locality and memory amidst technological modernization. 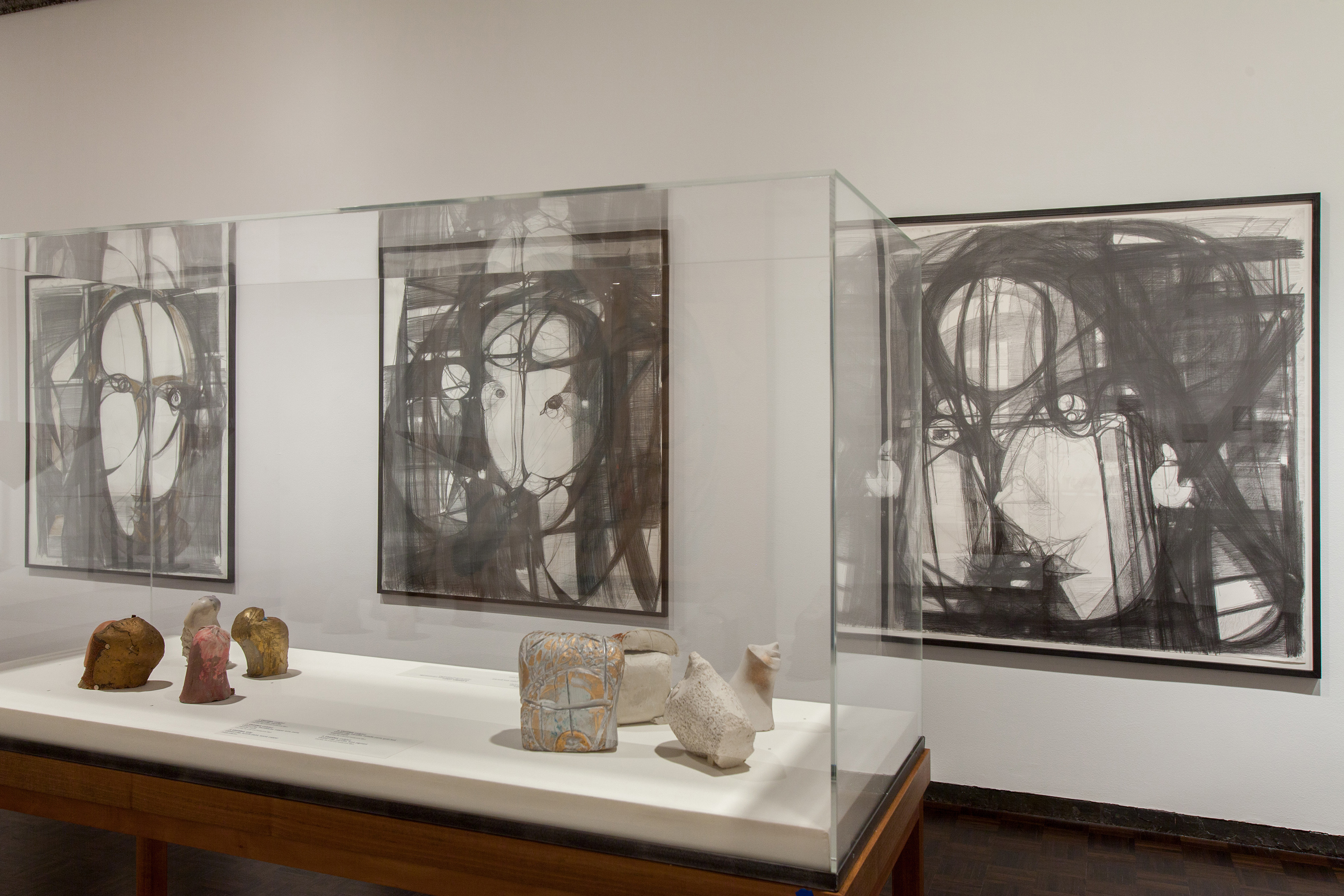 Marisa Merz, The Sky Is a Great Space, installation view, 2017. Courtesy the Metropolitan Museum of Art.

The Sky Is a Great Space, Merz’s first major retrospective in the United States, celebrates an artist who has too long been left in the margins; Merz is now 90 and still lives and works in Turin. Opening with her earliest works from around 1965, when Merz crafted voluptuous foil sculptures in her home kitchen, the show delicately traces her exploration of many seemingly disparate forms. The array of media and scale in her work attests to the artist’s capacity to imbue even the “poorest” materials with synthetic serenity. The exhibition provides ample space for Merz’s sculpture—one can see Merz’s largest levitating foil work, Living Sculptures, as well as her petite knitted-copper wire shoes—while also offering a more intimate space to view the artist’s drawings. 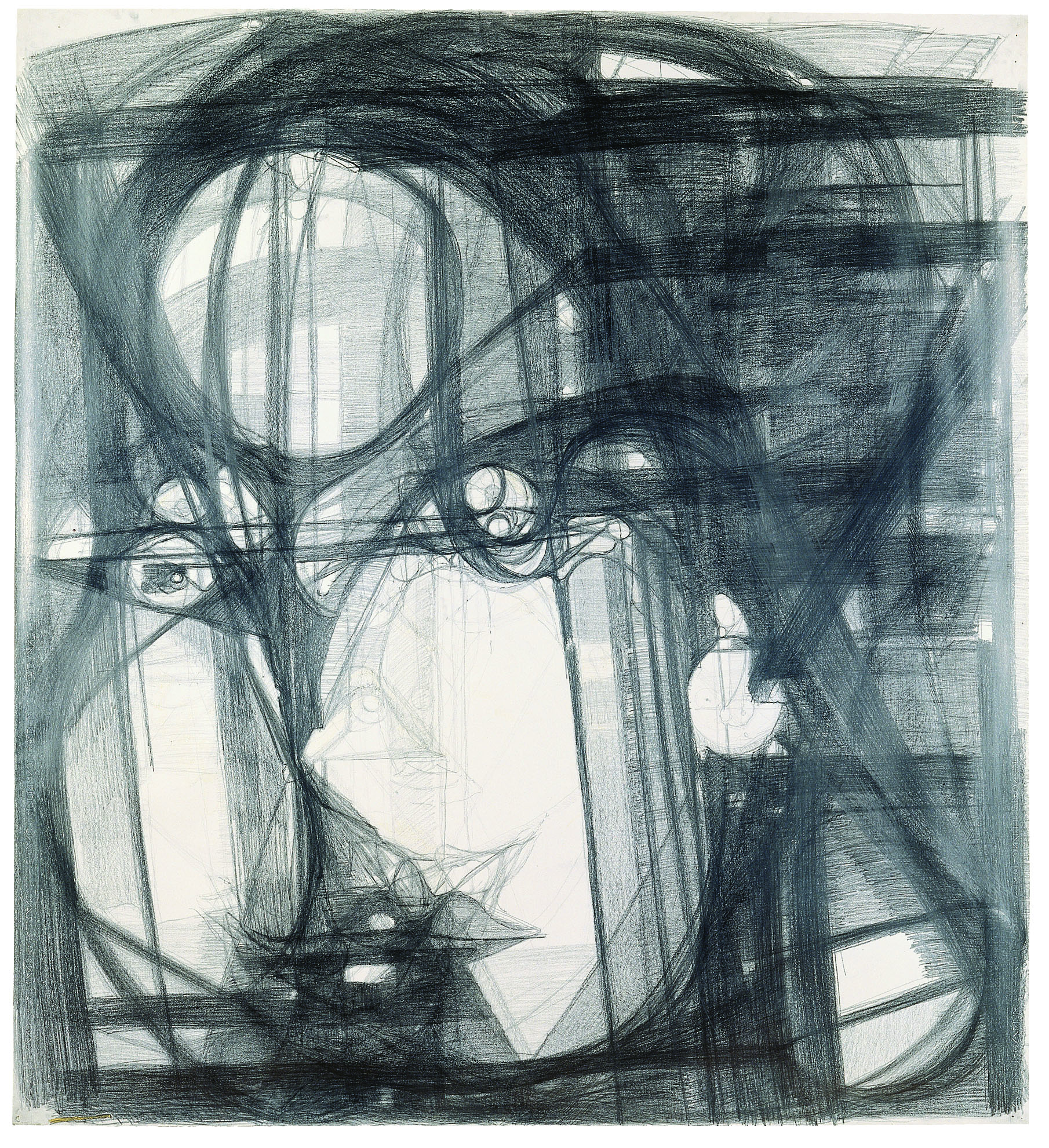 Stemming from her experiments with sculpture, Merz’s works on paper began to take on a larger, more confident scale by the mid-1990s. One of the most arresting moments of the exhibition comprises a suite of four square graphite drawings, each five feet in length. Here, swooping and repetitive lines form dense webs, entangling a singular, enigmatic head within each tableau. The gestural quality of these drawings is astounding. Layers of semi-transparent graphite planes, woven with tenuous, organic lines, form feminine cyborgs that entrap their viewers with their sense of movement. Opposite this series, a more lustrous and defined head, similarly rendered in graphite, emerges from rubbed layers of bright yellow pastel. Such equivocal faces are a frequent subject in Merz’s drawings, and often appear as angelic, royal, or even mythological women. 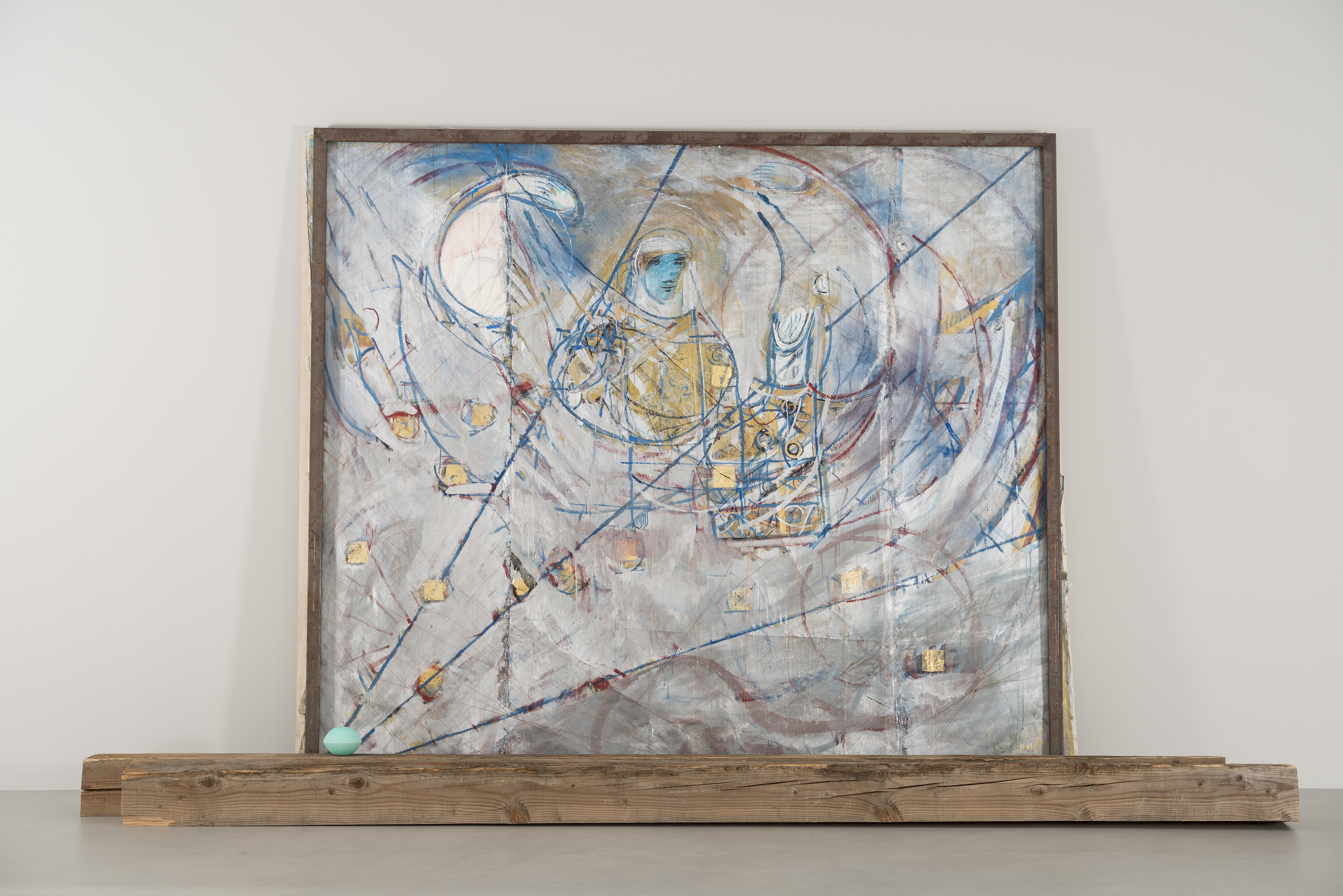 Though much smaller in scale, drawings in subsequent galleries illustrate Merz’s practice of working in series and across media. A wall featuring twenty-six drawings on canvas board, a dizzying array of still more surreal faces, is adjacent to a beeswax fountain, which quietly spouts water into its basin. Other groups of drawings that hang together illuminate the sheer number of media with which Merz experimented: her delicately repeated graphite lines achieve a unique sense of materiality when layered with metallic paints, pastels, watercolors, and color pencils. 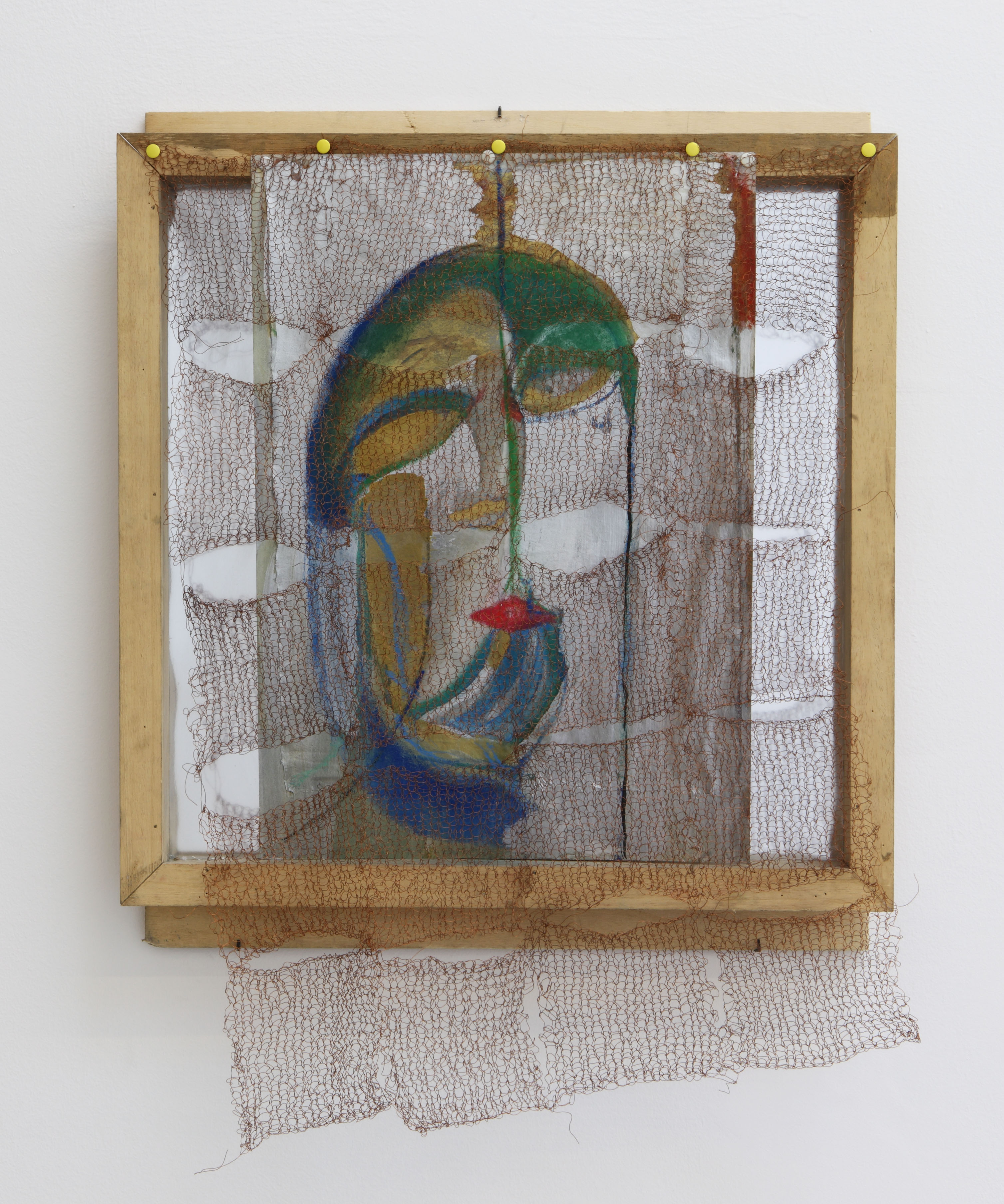 In The Sky Is a Great Space, it becomes evident that Marisa Merz’s works reflect the process with which they were created. An electric calm pulses through her work, from her knit-copper tapestries, through her floating foil sculptures, and feeds into the moving networks of her graphite lines. An achievement in its scale and revelatory breadth, The Sky Is a Great Space fortifies Marisa Merz’s visionary command of material, and, even  more so, her independence.

Marisa Merz: The Sky Is a Great Space was organized by Ian Alteever of the Metropolitan Museum of Art, New York and Connie Butler of the Hammer Museum, Los Angeles. On view at The Met Breuer until May 7, 2017, the exhibition will travel to the Hammer Museum from June 4 through August 20, 2017.