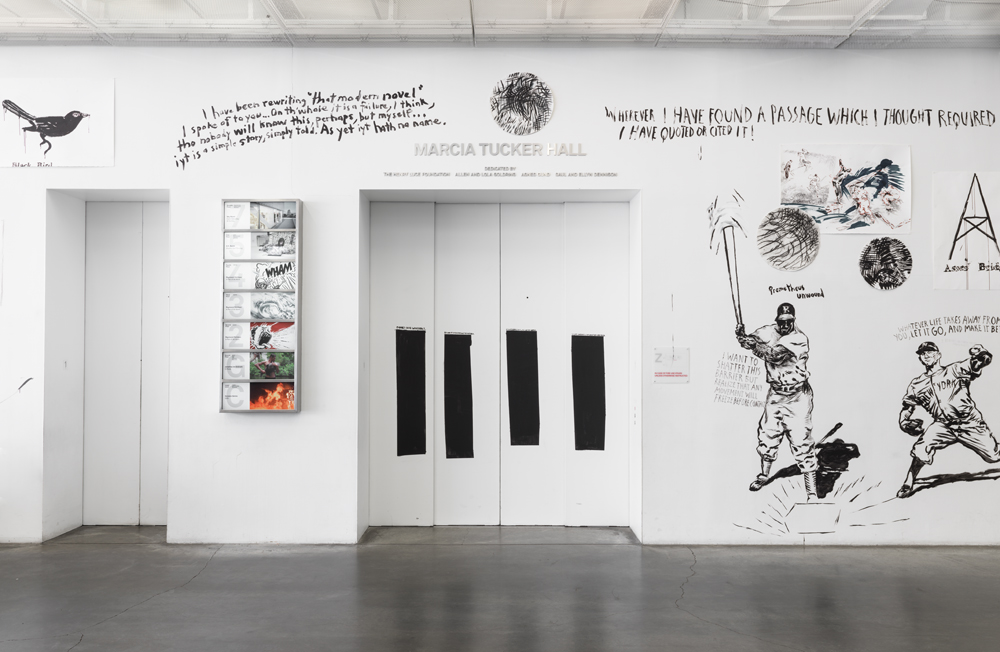 Gathering together Raymond Pettibon’s wide range of interests in politics, culture, religion, sports, and literature, A Pen of All Work at the New Museum demonstrates how the simplicity of the medium of pen and paper can be a point of departure for an infinite array of musings. Three floors of the museum are dedicated to more than eight hundred of Pettibon’s drawings, guiding us through his early critical engagement with the Los Angeles punk rock scene and its scathing critique of postwar America, to his later psychoanalytic self-portraits and drawings of childhood nostalgia. Throughout his career, whether in the 1980s when he was disseminating his drawings characterized by dark humor to the public through zines and Black Flag album covers, or in the mid 2000s when he was altering his crude childhood drawings of Nazi fighter planes by adding quotations from Proust, Pettibon has always used the pen as a tool for critical engagement with the socio-political landscape. 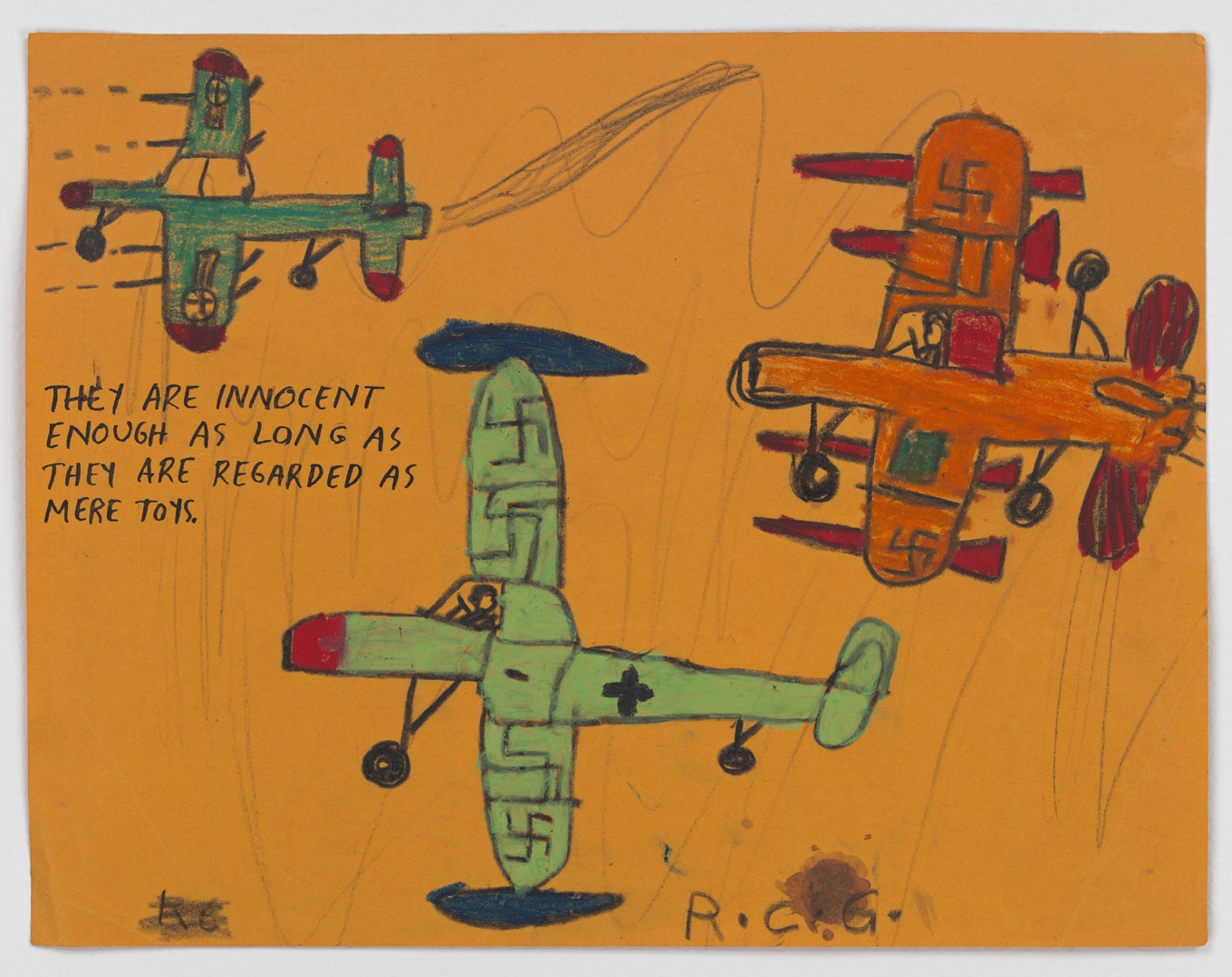 The rooms full of drawings are thematically organized into clusters of repeated images. Among these are trains, baseball players, political figures, wars, dysfunctional families, the Virgin Mary, Gothic Cathedrals, and surfing. Pettibon uses these images of shared cultural experience in conjunction with text to extract out cultural critique beyond what the eyes can see. He appropriates popular images such as the Pulitzer Prize-winning photograph of a naked nine-year old child running on the road after an attack during Vietnam War by adding this text on top: “‘If she didn’t want it then why did she have to ‘dress’ so provocatively?’ -Sec’y of State Henry Kissinger.” The text frames either a loose or specific narrative that guides the viewer’s perception of the image beyond the immediate visual experience. 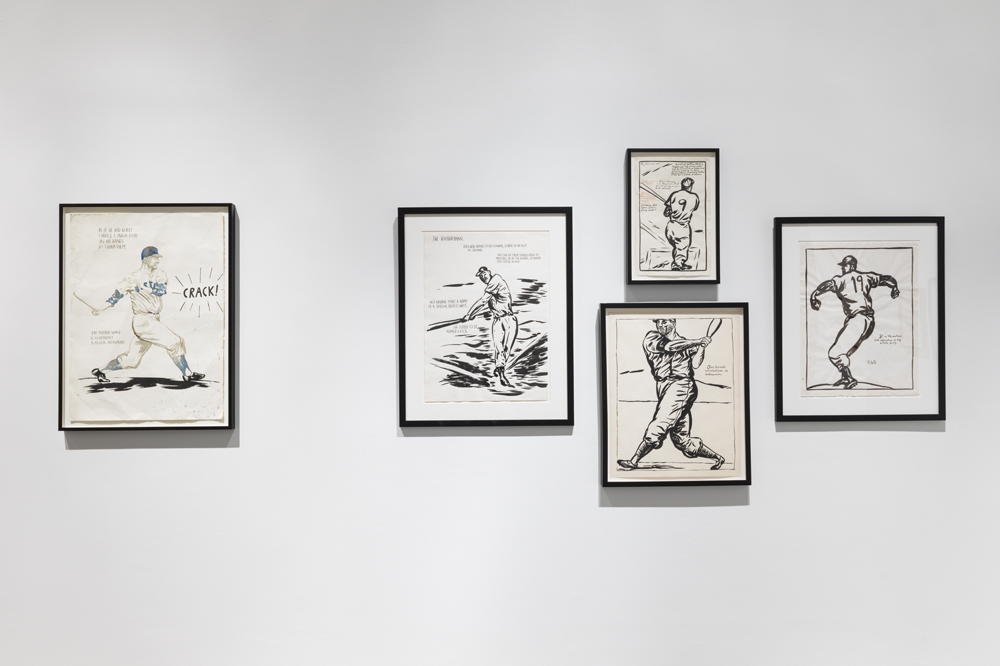 Pettibon’s work can be overwhelming in its vast and disparate content, however his ideas are brought together through the consistent use of pen and paper as a medium, as well as a consistent format of image accompanying text.In his drawings, tiny words are entangled within or at the edge of a single image in ink or watercolor. These words vary from witty one-liners that elicit a chuckle in the viewer to dense paragraphs scribbled in faded pencil that seem deeply absorbed in the artist’s stream of consciousness. The image and text are codependent in Pettibon’s drawings, where each cannot stand on its own. The image neither becomes a visual illustration of the text, nor does the text ever become a textual explanation for the image being presented. Both the image and the text carry their own way of expressing the artist’s ideas, showing how neither language nor image is the superior form of communication. 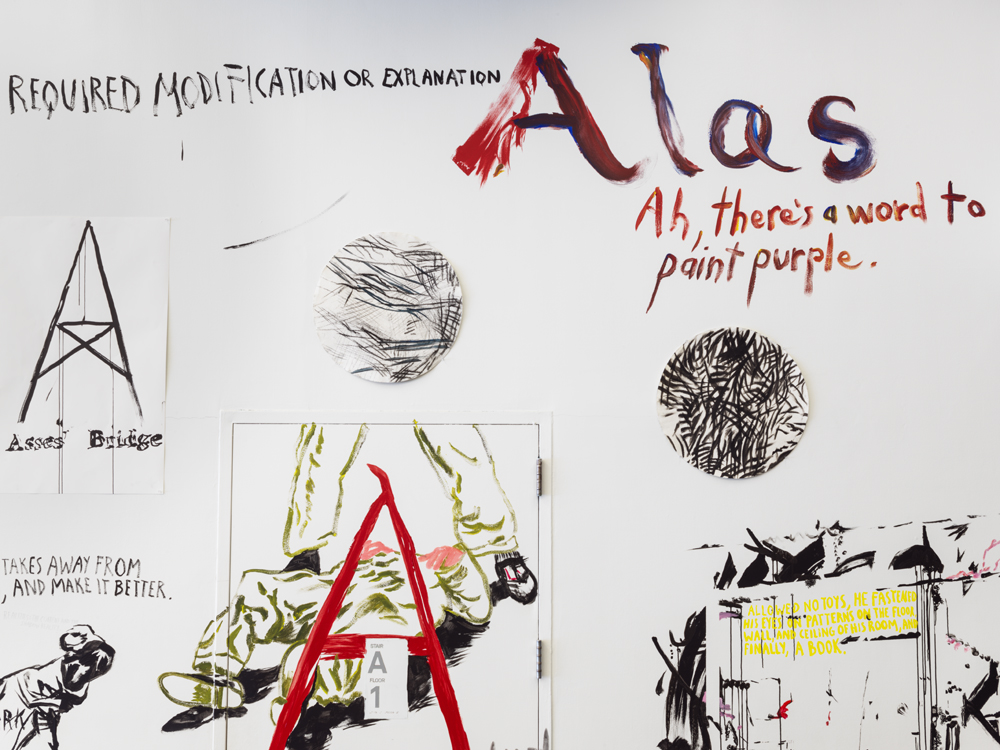 Pettibon uses ink to both write and draw, blurring the boundaries between the two disciplines. His ink can be thin enough to write in tiny letters, strewn across the paper in neat rows. His ink can also be thick enough to become an expressive painting at monumental scale, which at times results in massive conglomerations of intricate lines, as can be seen in his surf drawings and Gothic cathedral drawings. In his surf drawings, his blue brushstrokes accumulate into a giant wave that overwhelms and encloses a tiny surfer in the middle accompanied by a small paragraph of Pettibon’s philosophical meditations.

The sheer quantity of the prolific artist’s drawings and the stylistically hasty nature of the drawn lines attest to the artist’s interest in the Shakespearean notion of ink as the everlasting relic of his thoughts. The lines exude a sense of desperation the artist felt in documenting his ideas, mirrored in the urgency he uncovered in the social issues he interrogates. He refuses to be confined to the museum or gallery setting, demonstrated through the humble nature of paper and pen, his politically conscious content, and democratic distribution of his ideas through formal accessibility.

Raymond Pettibon: A Pen of All Work is on view at the New Museum through April 9th, 2017.