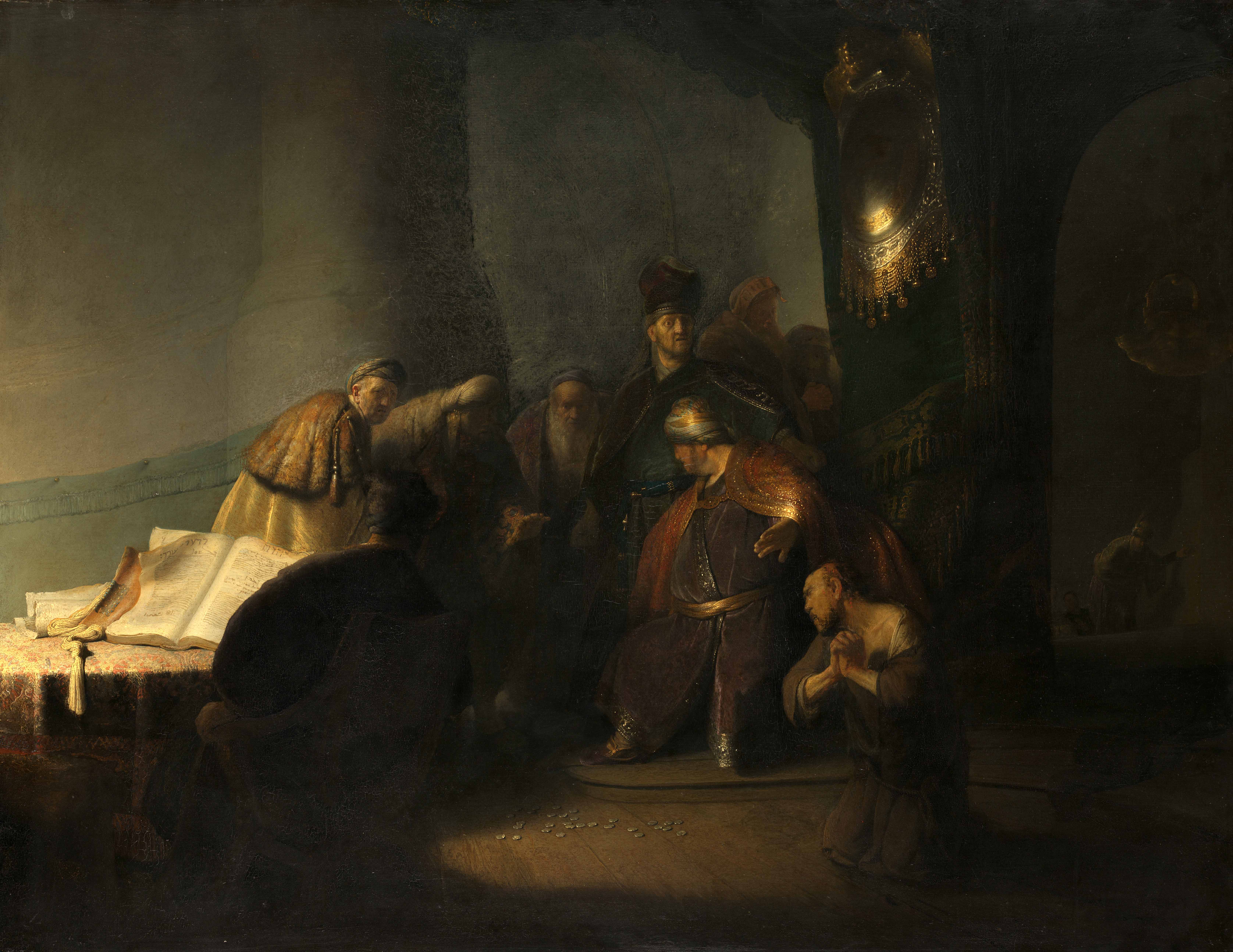 Rembrandt van Rijn’s Judas Returning the Thirty Pieces of Silver, 1629, currently on view at the Morgan Library and Museum in New York, is a painting that I deeply admire. Rembrandt, largely regarded as the greatest Dutch painter of the seventeenth-century, completed this piece at the age of only twenty-three, long before he became known for the dramatic lighting and deft rendering that characterize this early work. Recognized as the artist’s first masterpiece, the painting depicts the disciple Judas remorsefully bringing back the bribe received from a group of priests in exchange for betraying Jesus.

In addition to exhibiting this privately-owned masterpiece in the United States for the first time, the Morgan exhibition also showcases a series of preparatory works for the painting and numerous other works which survey the drawing and etching techniques used by the artist throughout his career. Beginning with a series of early self-portraits, the show moves on to his early etchings of gospel scenes, and finally to some of his late works, including several crucifixion scenes. 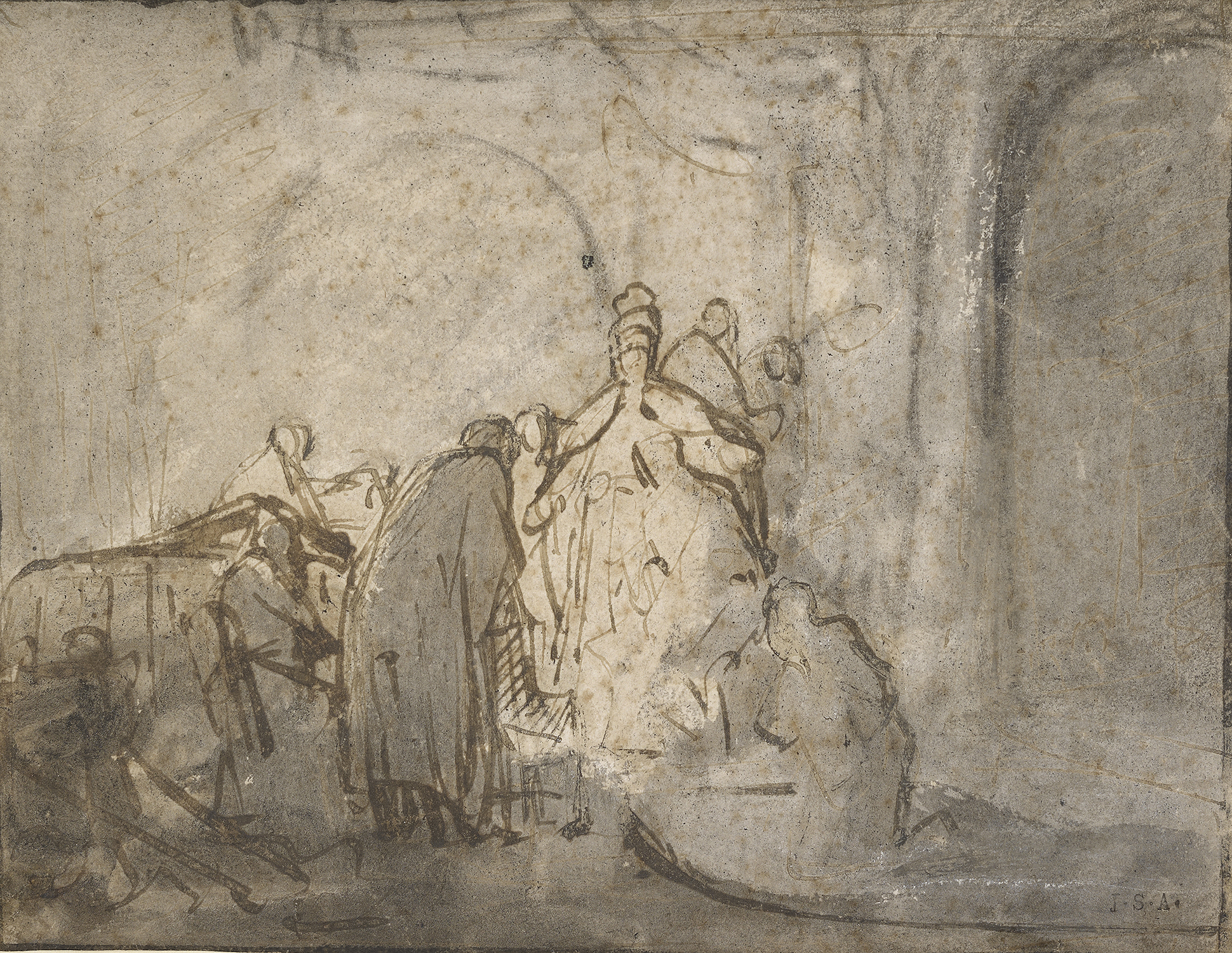 In the foyer of the exhibition space, the show begins with a quote by Constantijn Huygens, a Dutch diplomat and art connoisseur, reflecting upon Rembrandt’s genius after a visit to the artist’s studio. Huygens writes:

…that one maddened Judas, screaming, begging for forgiveness, but devoid of hope, all traces of hope erased from his face; his gaze wild, his hair torn out by the roots, his garments rent, his arms contorted, his hands clenched until they bleed; a blind impulse has brought him to his knees, his whole body writhing in pitiful hideousness. […] All honor to thee, Rembrandt!

Although I had never seen Rembrandt’s painting of Judas in person, in my own practice as a painter I have interpreted and abstracted this image many times. What draws me to the work is the deep absence in the center of the composition. Often Rembrandt utilizes a central light source that radiates outward and defines the space of his compositions, but in Judas Returning the Thirty Pieces of Silver this approach is inverted, and all the energy seems to emit from or sink into a dark, central void. The priests, who huddle together and lower their faces toward the kneeling Judas, dissolve into shadow. Rembrandt’s formal choice of emptying this central section of the canvas creates a striking psychological effect, and speaks metaphorically to the despair that surrounds the biblical narrative. 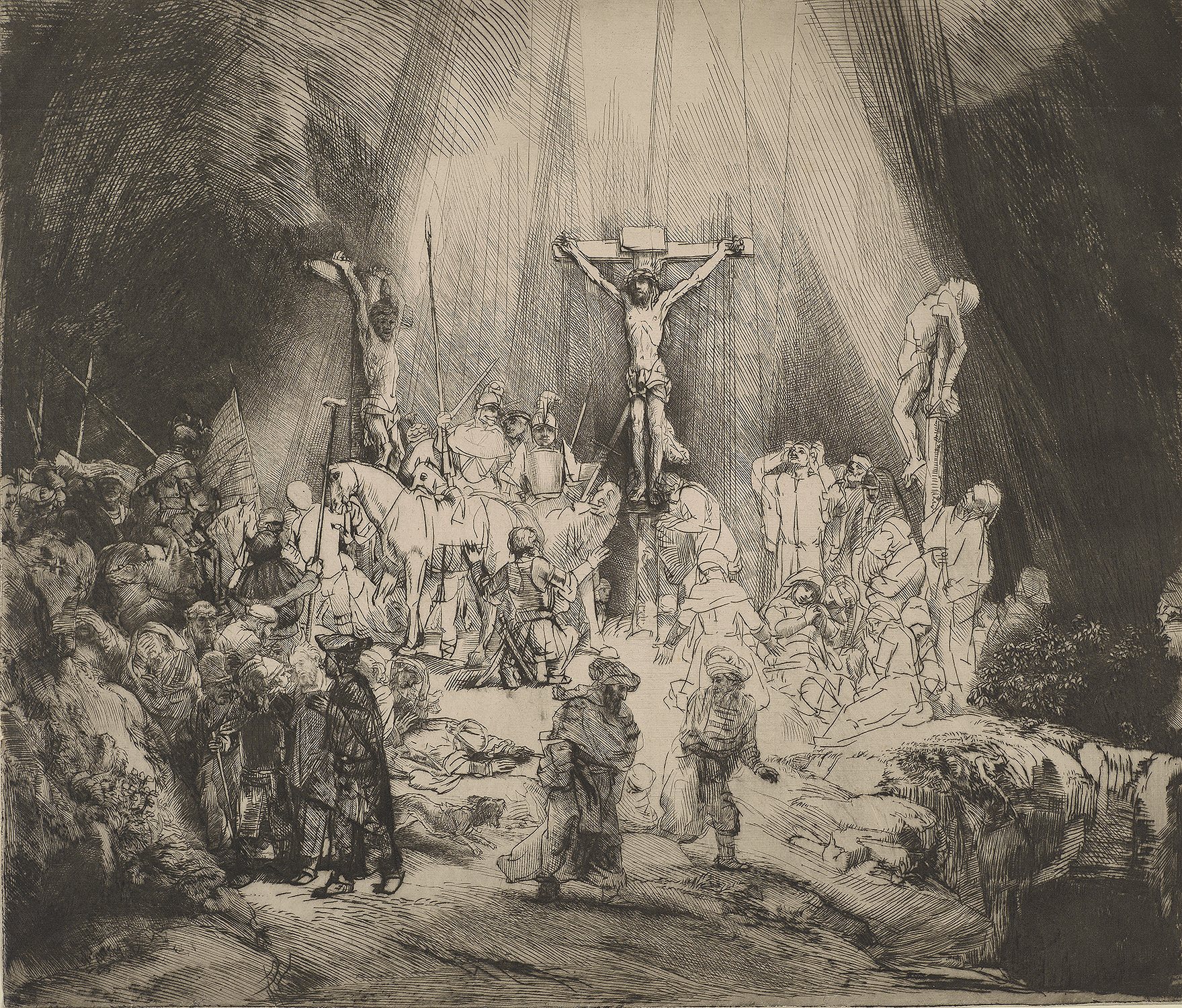 Several compositional patterns in Rembrandt’s etchings reappear throughout the exhibition, and may have been informed by his Judas painting. For instance, similar to the priest who is seated in shadow in his masterpiece, in several of Rembrandt’s etchings we find a figure seated in the foreground in shadow, with his back facing the viewer. This composition creates a strong sense of spatial depth and a feeling of intimacy as we peer into the scene from outside. This also presents a crucial structural moment when light meets shadow in the bold form of a figure’s silhouette. 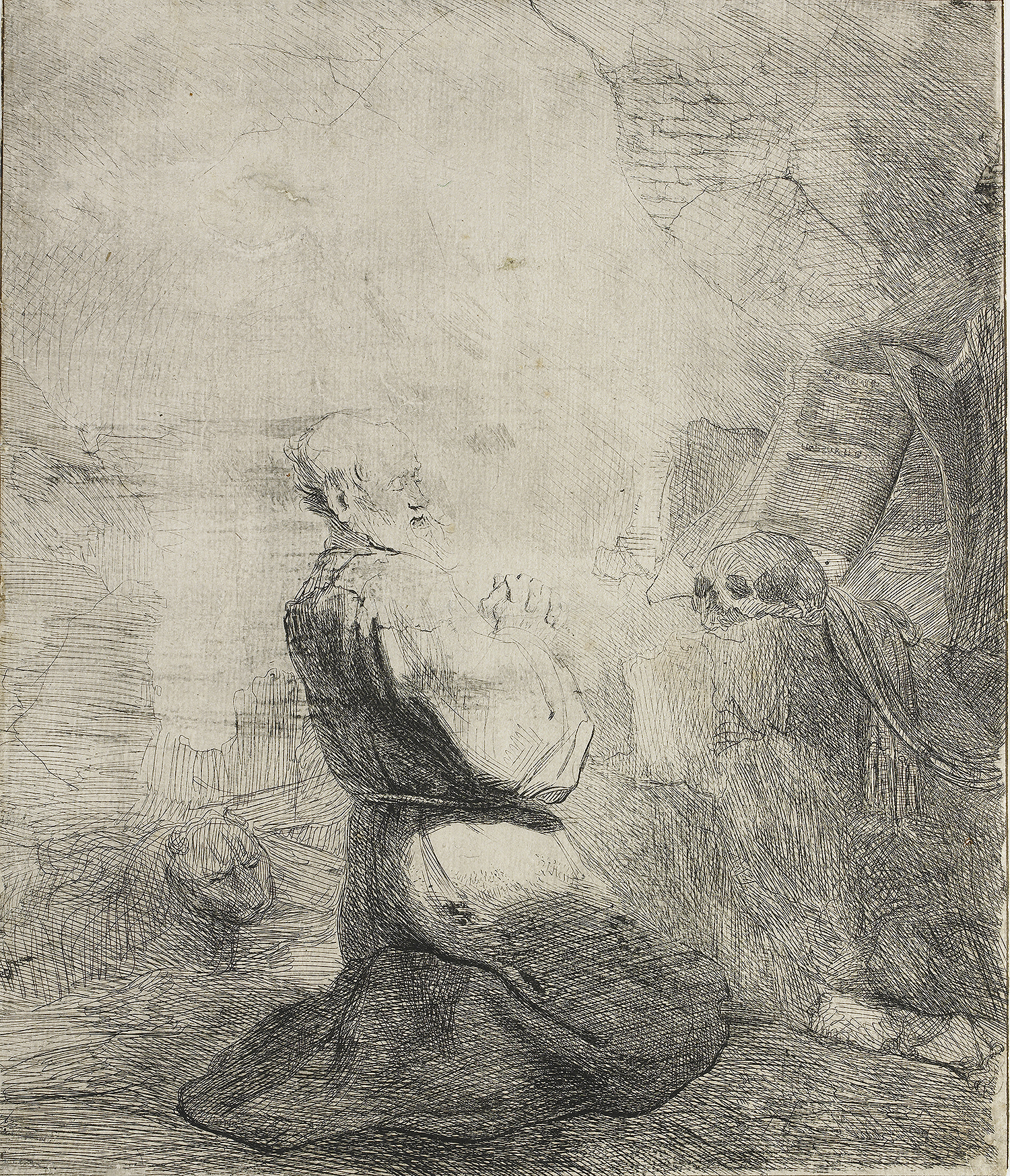 The final wall of the show draws connection between the kneeling Judas figure in Judas Returning the Thirty Pieces of Silver and similar seated figures in in Rembrandt’s works, such as his portrait of a kneeling St. Jerome or the enfeebled figure in SS. Peter and Paul Healing the Cripple at the Gate of the Temple, 1659. The kneeling figure in these works comes to encompass not only the emotions of Judas’ repentance and guilt, but also the purity of devout prayer, the desperation of the impoverished, the anguish or serenity of human emotion in all forms.

‘Rembrandt’s First Masterpiece’ is on view at the Morgan Library and Museum through September 18, 2016.