Dana Lok is an emerging Brooklyn-based artist whose drawings and paintings subvert established conventions of pictorial representation. Redrawing familiar images culled from a wide range of sources, including paintings by the French modernist Edouard Manet and the animated series Looney Tunes, Lok’s drawings show that images can affect the way we see and alter our perception of the world.

In this studio visit, Lok speaks with The Drawing Center’s Curatorial Assistant Amber Moyles about themes in her work.

Amber Moyles: Dana, you’ve done a number of works based on paintings by Manet. Could you tell us about these works and the way you played with some of Manet’s images?

Dana Lok: The transformation in this series, which takes Manet’s Le Déjeuner sur l’herbe as its starting point, began with a somewhat irreverent transposition of the main figure’s pointing finger over the face of the bather in the background. It’s strange, in the original painting the hand and face are perfectly vertically aligned. I realized this is what you might see if you were inside the picture, looking upward at this scene instead of downward.

I began to think about the painting as its own world that you can enter and explore from different angles. The shift in viewpoint creates new spatial relationships between elements. By looking from a new angle, you can expose an alternative narrative. I like to entertain the idea that this alternative narrative could have been embedded all along inside the picture. 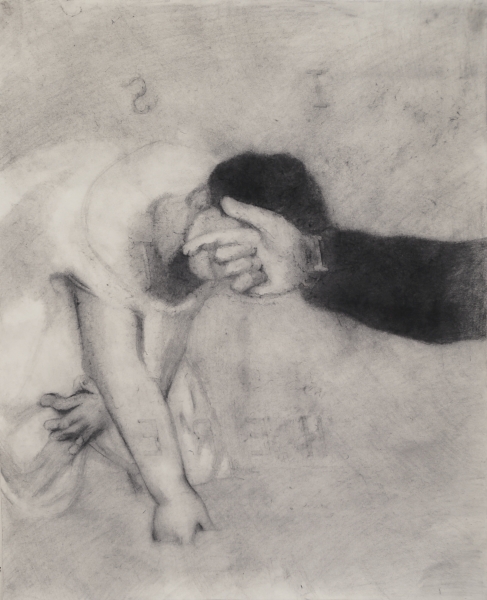 In addition to art historical sources, you also reference cartoons in your work. I am hoping you can tell me about some of the animated films you return to again and again, and what this appropriation means to you.

A drawing is still, but almost every picture contains a world that implicitly extends through time. I’ve been working on compositions that make this temporal dimension explicit by showing you a view of more than one moment of the drawing. A temporal, sequential structure allows me to create metafictional moments, where an element from within the depicted world interacts with its own means of depiction. For example, in my drawing Frame by Frame, I imagine a hand pulling back a veil to see the next frame its own animation, in Upside Down Lunch, a man’s pointing hand directs you to the next moment of the scene, and ultimately, outside the picture.

I’ve always taken inspiration from analog animation, the Fleischer Brothers’ Out of the Inkwell series and the Warner Brothers’ Looney Toons. Constructing drawings from elements that refer to the magical world of cartoons reinforces the possibilities of visual play. 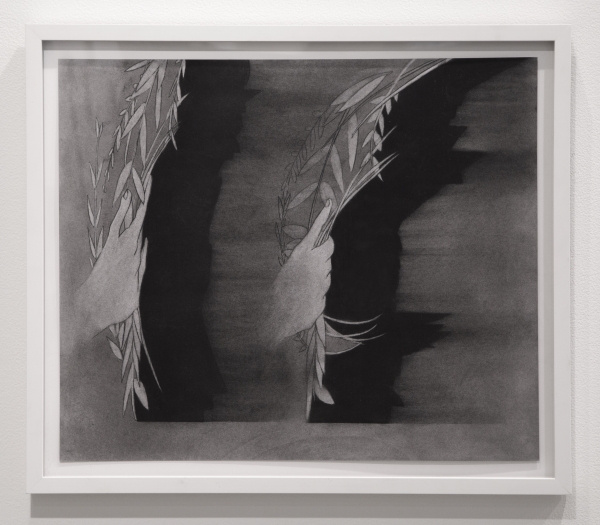 A cartoon-like exploration of flatness seems to be an ongoing theme in your work.

Yes, I think the play between flatness and depth recurs because it is a perfect tool for me to investigate the threshold between a drawing’s surface and its pictorial space. My investigation of flatness and depth in this almost illustrative manner is driven by my deeper fascination with the relationship between matter and meaning at play in any sign.

A naturalistic painting depicts volumetric forms on a surface that is, of course, flat. A painting like Manet’s reveals the oddities of pictorial volume enmeshed in physical flatness—not unlike the visual puns of depth and surface at play in many a Roadrunner cartoon.

Manet was criticized for painting figures that looked as flat as playing cards. In my ink drawing, Tilted Bather-ink, I imagine a viewer tilting their head to get a clearer view of one of Manet’s figures, but, ultimately, the image has no more information to offer. Instead, you see a two-dimensional figure in three-dimensional space. 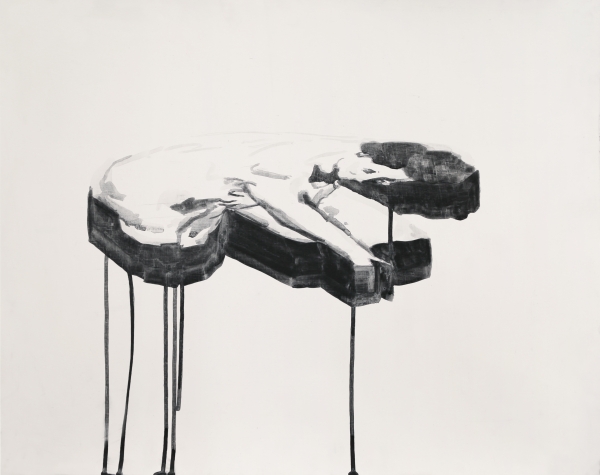 Could you speak more about the viewer’s participation in your work?

Many of my works speak directly to the viewer. I love that I can put the word “you” in a drawing and reach out directly to any individual that happens to stand in front of the work. I’m interested in the contingent, spatial properties of words like “I” and “you.” I explore this in my diptych Blind Butterflies. Depending on which side of the diptych you read from, the question “How do I know it’s you?” runs forward or backward. I imagine the viewer can occupy the position of “you” when reading from one direction, and “I” when reading from the other. 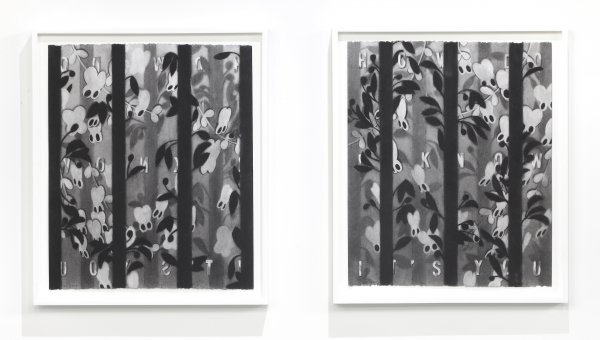 You are currently working on a series of drawings that reference Van Eyck’s Arnolfini Wedding, can you describe how you will build on and alter Van Eyck’s original painting in your work?

One art historical reading of Van Eyck’s painting argues that the work was part of the bride’s dowry, and Van Eyck himself served as a witness. In this way, this painting is more than a trinket to commemorate the marriage. It is an active part of a marriage promise. A promise is a special kind of utterance that does not represent something already in the world, but instead, acts upon the world.

In my drawing, I’ve placed a little object, an optical illusion, in the hand of the bride. Like a promise, this object does not actually represent anything already in the world. It’s a kind of rupture in the system of signs. The original painting shows this couple hand-in-hand, and her hand is positioned in relation to his. But, when the object is placed in her hand, her gesture becomes one of presentation to you, the viewer. I like to think about your observation of my drawings as an active part of their creation. 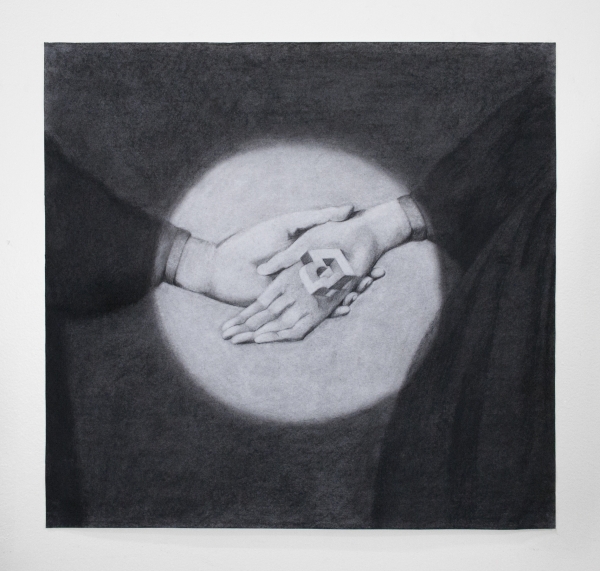