From November 5, 2005 to February 11, 2006, The Drawing Center hosted an exhibition about an event that took place 30 years prior, yet with repercussions that were timely for the moment, and even for today. Persistent Vestiges: Drawings from the American-Vietnam War was curated by then-director Catherine de Zegher and included media such as photographic prints on leaves and sketchy murals with a calligraphic touch, as well as painted images documenting the less violent scenes of the war.

Despite all its varying viewpoints, one might still be tempted to ask what relevance the show could have for a 21st century museum-going public that seemed, at best, distanced from the entire topic. In 1990, about fifteen years after the end of the conflict in Vietnam,  the rock band Poison spoke about a veteran of the war in their monster ballad “Something to Believe In”: “In a time I can’t remember, in a war he can’t forget.”[1] The underlying message, aimed at the non-veteran public, suggests that even if you can forget, you shouldn’t. 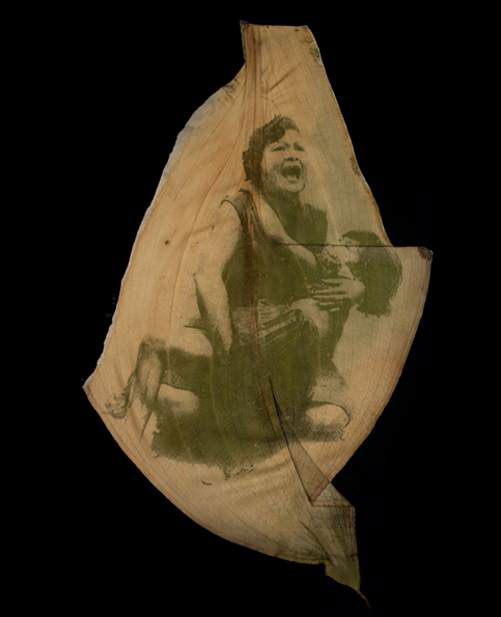 The work presented at The Drawing Center in Persistent Vestiges was made by three sets of people: two American women from an older generation, Nancy Spero and Martha Rosler; six Vietnamese artists from roughly the same generation, Nguyen Cong Do, Nguyen Van Da, Nguyen Thu, Quang Tho, Truong Hieu, and Vu Giang Huong; and finally two Vietnamese-American artists born around the end of the conflict, Dinh Q. Le and Binh Danh. With questions that could be applicable to any war, de Zegher asked, “How are traumatic events and memories recorded visually, mapped, carried with a person, negotiated in relation to new experiences? In what ways are these individual or shared?…How can these images achieve individual healing and possibly shared reconciliation?”[2]

In answer to these challenges, some of the most striking work comes from Binh Danh. Photographic images of Vietnamese children missing limbs, pietas of mothers with children, random portraits, planes dropping bombs, and troops on the move are printed on various tree leaves. Using foliage of different sizes, shapes, and colors, the work is aesthetically fascinating, yet the fragile and temporary material combines with the subject matter to make a poignant statement about the ability of life to slip away. The monochrome images in either black and white or shades of green blend naturally into the leaves, as if nature herself recorded what she had witnessed.

Another impactful work is the mural Search and Destroy (2005), created especially for the exhibition by Nancy Spero. Sketchy lines expertly capture the essence of a U.S. military helicopter in flight and clouds of smoky explosions. The disjointed figures on a mostly blank wall have an immediacy about them that is at once stark and factual, while at the same time personal and packed with emotion. Speaking about the straightforward, figurative style of most of the Vietnamese artists in the show, the catalogue notes, “Violence is rarely depicted, and when it is, the image is not of human suffering but of wounds inflicted on the land. Trees and rivers, in some instances ravaged by napalm or herbicide, stand in as the metaphorical collective body of the Vietnamese people.”[3] Spero, a longtime fixture in the New York City art scene, died four years after the exhibition at age 83. Binh Danh (b. 1977) continues to exhibit work that examines the remnants of this forgotten war, as well as his heritage as a Vietnamese-American. 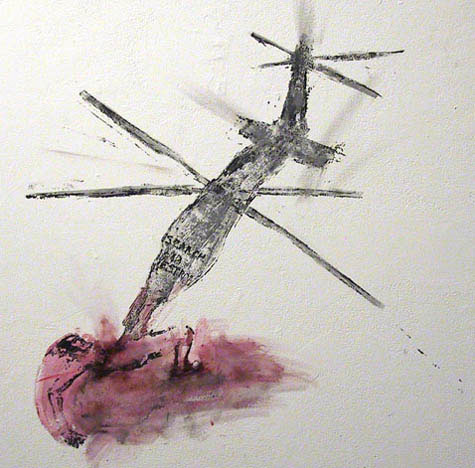 De Zegher also highlighted the notable artistic choices of female Vietnamese artists in the exhibition. At a time when many people were shedding light on underappreciated women and gender biases, these unrecognized artists were recording a very different life than their American feminist counterparts in the 1960s and 70s. Vu Giang Huong’s monochromatic sketches of ink, wash, and gouache on paper offer glimpses of women learning to shoot and installing cable in the ground. The compositions are evidence that the women of Vietnam were mightily involved in wartime operations, worked hard in dangerous situations, and benefitted from the camaraderie their groups provided.

The Vietnam War is a distant memory for many, and for scores of the younger generations, it is merely a blip on the radar of a social studies class. Yet we are still suffering from the reverberations, and given the recent war in Iraq and the current war in Afghanistan, one must wonder if we have truly learned the lessons Vietnam had to teach us. This second look is exactly what Persistent Vestiges was all about. The task of directing the collective gaze, in hindsight, falls in part to museums and other organizers of exhibitions.

On April 5, 2013, Brown University’s List Art Center hosted a one-day symposium titled Art and War in Iraq. Speakers included Wafaa Bilal, an insightful Iraqi-American artist; Meir Wigoder, a professor at Tel Aviv University; Daniel Heyman and Susanne Slavick, two American artists working on responses to the Iraqi-American War; and Rijin Sahakian, an Iraqi-American who founded an art school in Baghdad. Topics ranged from racial profiling to the study of the nude in the Middle East, and offered an open forum to discuss what we, as a set of societies, may be reticent to address. As the longest wars in United States history, the instances where Iraq and Afghanistan pop up for discussion are now surprisingly few. Whereas Persistent Vestiges sought to achieve the benefits of hindsight, Art and War in Iraq, and other events like it, have attempted to look at some very fresh wounds. 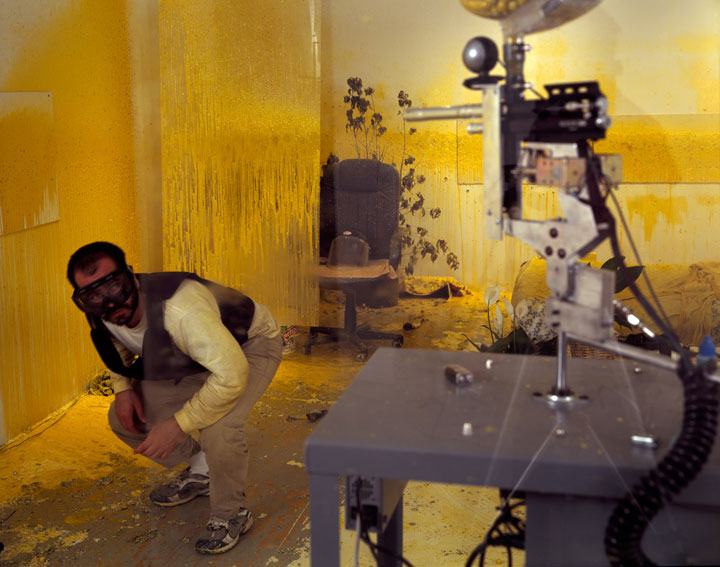 So, what perspective did Persistent Vestiges afford us? Even thirty years later, war and its repercussions are still assaulting residents of both countries, whether through physical or psychological wounds. “Learn from this,” de Zegher seems to shout at viewers. In stride with politics, activism, and other means of shaping society, artistic expressions can speak with equal or greater power. The lessons that can be mined from Persistent Vestiges teach us that issues brought up by the war in Vietnam are still applicable for the conflict in Iraq, and most likely, will also be relevant throughout the war in Afghanistan.