In advance of the third program in The Drawing Center’s Drafts series, Visitor Services Manager Genevieve Wollenbecker speaks with London-based artist Cally Spooner about event-making, live research, and drafting as a performative practice. 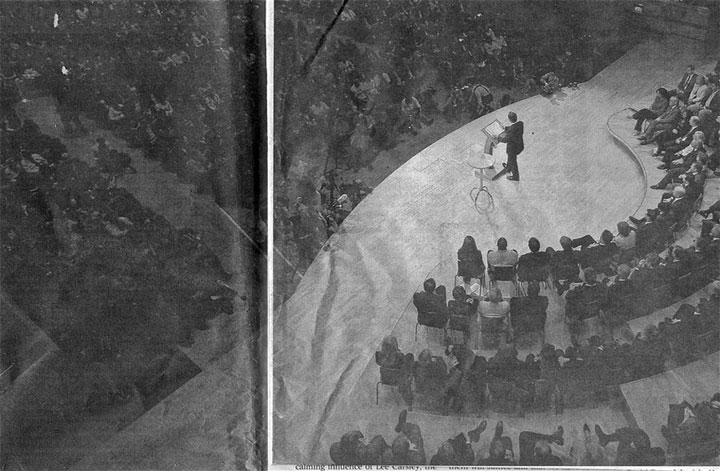 Genevieve Wollenbecker: From reading several press releases and biographies from your latest exhibitions, the expansive, open nature of your work shows through each institution’s multi-tiered, discursive description. How would you describe your practice and your role in it?

Cally Spooner: My role in my practice sits somewhere between being a writer, a producer, and a director. I don’t consider myself to be a performance artist, although for a while (and still now) this is how people talk about my work. I don’t feel especially that I make performances. Recently, I’ve been talking about my practice as ‘event-making.’ Within this, I need to operate as a writer, because my texts always provide the structure for a new event; I need to operate as a director, because I often work with quite large casts and crews of people to deliver the writing; and as producer, which is really about the labor of just getting an event up and running and keeping it going until it’s ended.

I have been thinking more extensively on what it might mean to talk about event production as a medium. My practice is heavily influenced by Sanford Kwinter’s writing on the architectural event. For Kwinter, the event is dynamic and multiple, formed from temporal spaces, indeterminate formations and experiences. Materials are in a state of genesis and in formations that might only exist at one particular point in time. I’m super interested in this in terms of a coming together of persons, research, and language, and how this could be installed in real time. I’ve also been thinking about my events in terms of collage. In them I re-stage found language from advertising and news feeds by placing a new and disrupted language into the bodies of performers, who then carry, or install, this collection of materials before an audience.

GW: What are some of the projects you’re most proud of?

CS: I’m proud of Collapsing In Parts (2011–2012). This was a solo show that I performed over the course of a year, essentially in response to how the usual one- or two-month timeframe of a gallery show can’t automatically accommodate an event-based practice. I also think about text and writing as events. To exercise this concept through the show, I wrote a novella incrementally online, which explored some foundational ideas around public-ness and performance from Hannah Arendt’s The Human Condition. The novella unfolded as an investigation into creative progress, public-ness, and improvement found in sporting and political spheres. The notion of performance was approached as a promise, wherein production and revisions became an integral part. Across the span of the project the solitary writing activity was accompanied by a series of live Footnote ‘events’ which functioned as performative demonstrations of ideas explored in the novella. The project settled into a single feature-length film, exhibited at International Project Space in Birmingham, UK in September 2012.

My current project, which I’m also feeling good about, is an itinerant musical theater production: And You Were Wonderful, On Stage. The first part was commissioned by and premiered at the Stedelijk Museum, Amsterdam last month, and it will evolve in parts as it tours between institutions, and then become a film and a book. For this project, I have stopped using philosophers’ texts as structures, working instead with appropriated workplace language and current affairs.  The project explores how cognitive activity is increasingly synced up to networked productivity, and language tied up in economic interests (e.g. the unyielding metabolism of “high performance” adspeak). It stages how spectacle inhabits language as it moves from the screen and stage into the thick of lived experience, where it deadens the drive for difference and performs a making-technical of life. So again, it’s a project that is developing in installments and parts. 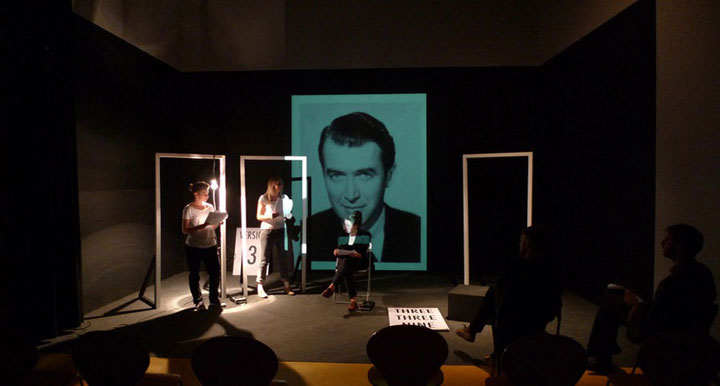 GW: Many interviews and articles refer to the philosophical source materials in your work, as well as the theatrical traditions (i.e. Brecht/Modernist theater) that have influenced it. I’m interested to hear which artists have inspired your process and work.

CS: The designer and typographer Will Holder‘s approach to speaking through other people and, again, of event-making through this modality is of major significance to me (I have worked with him several times). In a similar vein, the work of Dexter Sinister and (the former) Dot Dot Dot Magazine are important pioneers of this notion of publishing and writing as event. In particular, the early work Stuart Bailey was doing with Ryan Gander, developing these large systems of research via books and invented/inserted new language, where individual works would become part of a larger moving, evolving idea, influenced me hugely. I would say these have set a precedent for me and my working processes, whereby I operate within these research systems where different parts, acts, or installments unfold over a period of time.

More historically, I’m interested in Kurt Schwitter’s principles of Merz, that all things belong to all other things. I have an ongoing fascination with (and a radio chat show about) his Merzbau, as a mutable evolving construction, that could not and would not operate simply as a discreet object. More recently, I’ve become very excited about Karl Holmqvist’s writing, Keren Cytter’s more recent theater-making as a vehicle for her writing, and Tino Sehgal’s non-theatrical approach to the creation of an event, through formations of people and language. For me, it is Sehgal who is an artist absolutely using the event as a medium, in a particularly ambitious and high-production way, without flipping into theater, and keeping this mode very simple and precise. 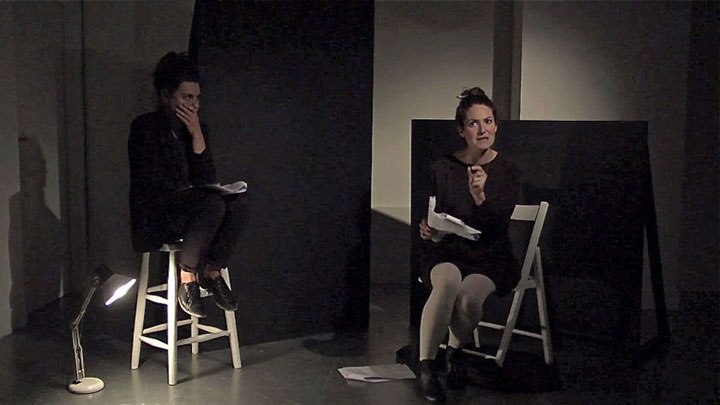 GW: I’m so glad you mentioned Tino Sehgal, as I believe your work explores similar themes of progress and productivity, especially Collapsing in Parts. I’m interested in how you view your work in terms of the object made. Though your projects defy finitude, what do you consider the documentation of your work (the object, the remains, the witness)? I’m intrigued by the potential economics of your project-objects and how you consider them. Is your work for sale like Sehgal’s de-productions?

CS: I use documentation to explain that something happened and, to put it really crudely, good documentation helps you get your next gig. But I would never show documentation, or rely on it as a substitute for the live event. I actually always create some kind of obstruction with the direct documentation, so for instance just using stills and sound recordings rather than direct moving footage of the event. The filmed footage of my live performances is super problematic because after the event that can be mistaken for the work itself, which it absolutely isn’t.

Instead, I’d much rather re-stage something for the camera. For instance Collapsing In Parts in its entirety was a live event (a one-year solo show) and to document that I created a straight-take unedited feature film where I tried to emulate the behavior and movement of that project to the camera. So in that sense it was about stepping away from the event entirely and creating something new, as a way of marking or registering it.  Most recently at the Stedelijk, rather than film the main event I shot the rehearsal as a straight-take piece beforehand, in a very formal controlled condition, so we had this document of what would eventually come in a different form. This worked really well.

As for the events themselves, yes some are for sale, but not all. They get sold as scores and instructions—but only the ones that have finished moving, where the researching is done. A piece I’m showing at the moment at the Kunsthal Charlottenborg in Copenhagen is a good example of this. Also, I do consider the events themselves to be a type of studio time that can and does generate more tangible materials for sale:  straight take films, sound works, scripts, props, books, and prints. But the live event is always the motor of anything I generate. 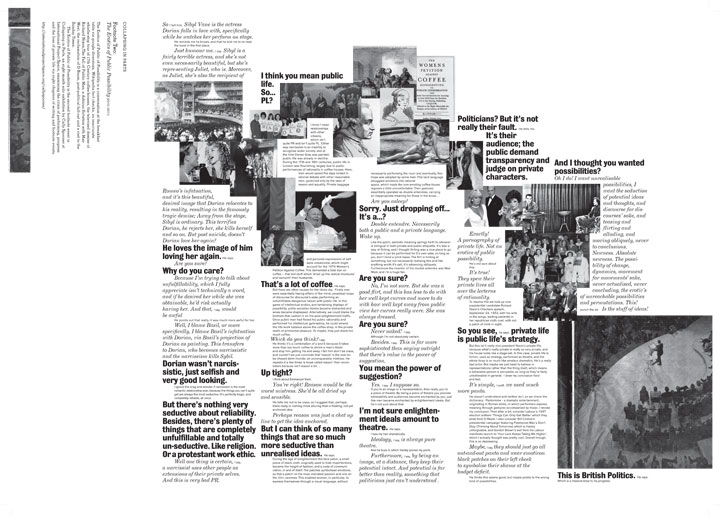 GW: I wonder if you could speak briefly about what you have planned for tomorrow’s Drafts Phase III event at The Drawing Center.

CS: I want to talk a bit about the inscription and certitude that seems to be evinced by many of the Phase III images, and also do some thinking around the themes of automation, prosthetics, stultification, and fossils. Equally, I want to try making a talk that is predominantly formed from samples: new writing, found writing, and some excepts from my novella, using this as a drafting process for my forthcoming exhibition at MOT International in Brussels in June. The talk might shift between several different topics, such as the arrival of Galileo’s telescope and the effect this created on theoretical introversion, and doubt; Margaret Thatcher’s claim to her daughter before she died “Carol, I think my place in history is assured”; Peter Bissegger and Harold Szeemann’s reconstruction of Kurt Schwitters’s Merzbau; some material from Bernard Steigler’s writing on prosthetics and technics; and a sample from a workplace transcript.

See more information on Spooner’s Collapsing in Parts here. More of her work can be seen via MOT International here.

Drafts Phase III: Information Transmission (Bodies of Evidence) is scheduled for May 10, 2013 at 6:30 PM. The program, based on images of experimental apparatus selected by Nikolaus Gansterer, will include collaborative performances by Cally Spooner, Avi Alpert, Mashinka Firunts, and Danny Snelson.