The American Folk Art Museum’s current show, Charting the Divine Plan: The Art of Orra White Hitchcock (1796–1863), curated by Chief Curator Stacy C. Hollander, tells the story of a 19th century woman who played a vital role in her husband’s scientific progress by illustrating images for his publications and painting large diagrams for his lectures on geology. The exhibition places an emphasis on the couple’s bond over their shared scientific interests and their personal convictions that science and religion were intertwined, but the art has equal value when approached with only aesthetics in mind. This decontextualization allows for a proliferation of meanings in the work, and makes room for untraditional and even subversive ideas on how the art can be viewed. The recontextualization of older art allows for its reassertion in the current era.

Orra White Hitchcock was born Orra White in Amherst, Massachusetts in 1796 to Jarib White and Ruth Sherman White. Her father was a wealthy farmer and provided his daughter with the best education possible in the area. As a testament to this education, a collection of some of the artist’s impressive mathematical equations are displayed, showing her early strengths in mathematics and science.

Also displayed is a watercolor painting titled Mourning Piece for Perez, Mabel, and Rebecka White, which White painted at the age of fourteen in memory of her older deceased siblings. The wall text notes White’s careful attention to the flowers and foliage. The scene in the painting is almost Surrealist, even though it was completed nearly one hundred years before the beginning of Surrealism. It is clear that the three urns in the image contain the ashes of White’s deceased siblings, but it is less obvious who the three figures are. They could be White herself with her mother and father, which would have excluded her surviving siblings, or perhaps the three figures are the ghosts of her deceased siblings. Either way, the setting of the memorial gravestone and urns is peculiar since it does not appear that they are in a cemetery with other gravestones. Rather the image is in a setting with rolling hills, each topped with a perfect tree. Set against this imagined backdrop, the painting is White’s personal, dream-like reconciliation with the death of her siblings. 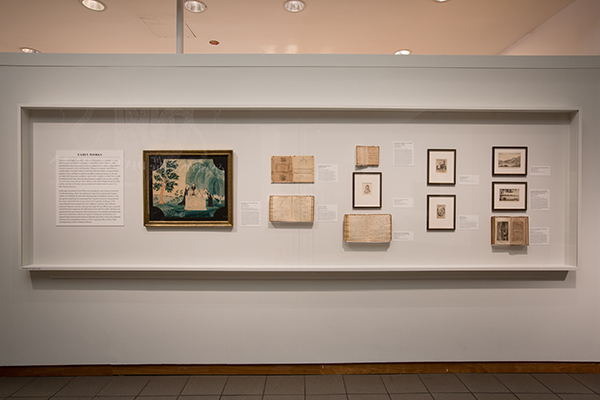 Eventually, Orra White started teaching at Deerfield Academy where she encouraged her students to draw botanical scenes and maps. At the academy, she met Edward Hitchcock, a geologist and theologian who was the principal of the school at the time. Edward, Orra, and several other scientists spent time studying the botany of the Connecticut River Valley between 1816 and 1818. The team collected specimens, which White drew to create a full herbarium of the plants in the area. In 1818, Edward asked her to contribute illustrations of the topographical features of the Connecticut River Valley to an article of his being published in The American Journal of Science. The drawing was the first of White’s illustrations to be officially published and viewed by academics.

Orra White and Edward Hitchcock slowly bonded over their scientific and religious interests and married in 1821. Their honeymoon was spent foraging for mushrooms with the goal of creating a catalog of all the fungi in the area. Orra White Hitchcock drew her mushrooms whimsically and was attentive to the small details of each species. She made sure to capture each specimen’s essence whether soft and fragile, like the example in the upper left hand corner, or more structured and bold, like the species in the lower left hand corner. (Image 3) White Hitchcock’s attention to detail in her botanical drawings results in images that are useful both in science and in fine art. The illustrations possess a kind of fantastical quality that cannot be found in contemporary botanic field guides which offer hyper realistic drawings or photographs of plants. White Hitchcock’s painterly style and perspective allow the viewer’s imagination to take over. When seeing a single mushroom straight on, rather than in large numbers from above, one can’t help but imagine that they’ve been shrunken down to the size of a bug and are roaming around the forest, looking at the plants from below. 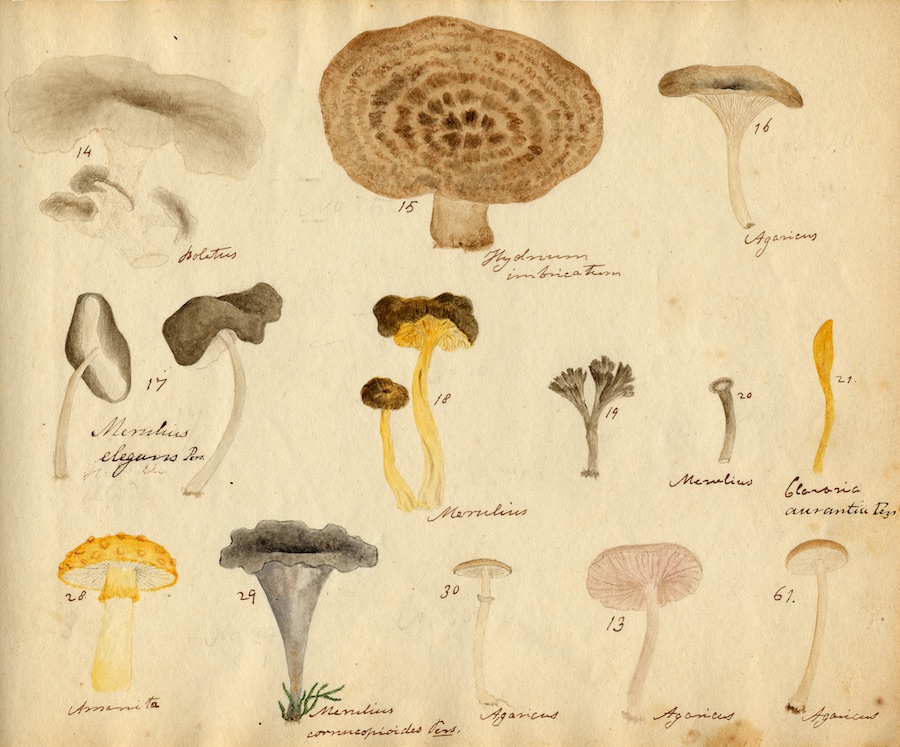 In 1826 Edward Hitchcock became a professor of natural sciences at Amherst College. He had White Hitchcock make large scale scientific diagrams to help students visualize the information presented during his lectures. She worked on large pieces of cotton, drawing in ink and using watercolors to add color. One diagram, labeled 37. Anthracite in Greywacke Slate. Newport, R.I., depicts anthracite, a hard coal with a high concentration of carbon, embedded in other stones underground. The diagram can be clearly understood with the caption, but if considered without the caption, the piece can easily be less representational. White Hitchcock’s use of color and pattern make for an ambiguous composition, allowing the piece to be completed by the viewer, who brings their own perspective to the painting. This image could read as a landscape, a microscopic view of a single follicle of hair, or a completely abstract composition of shapes, colors, and textures. 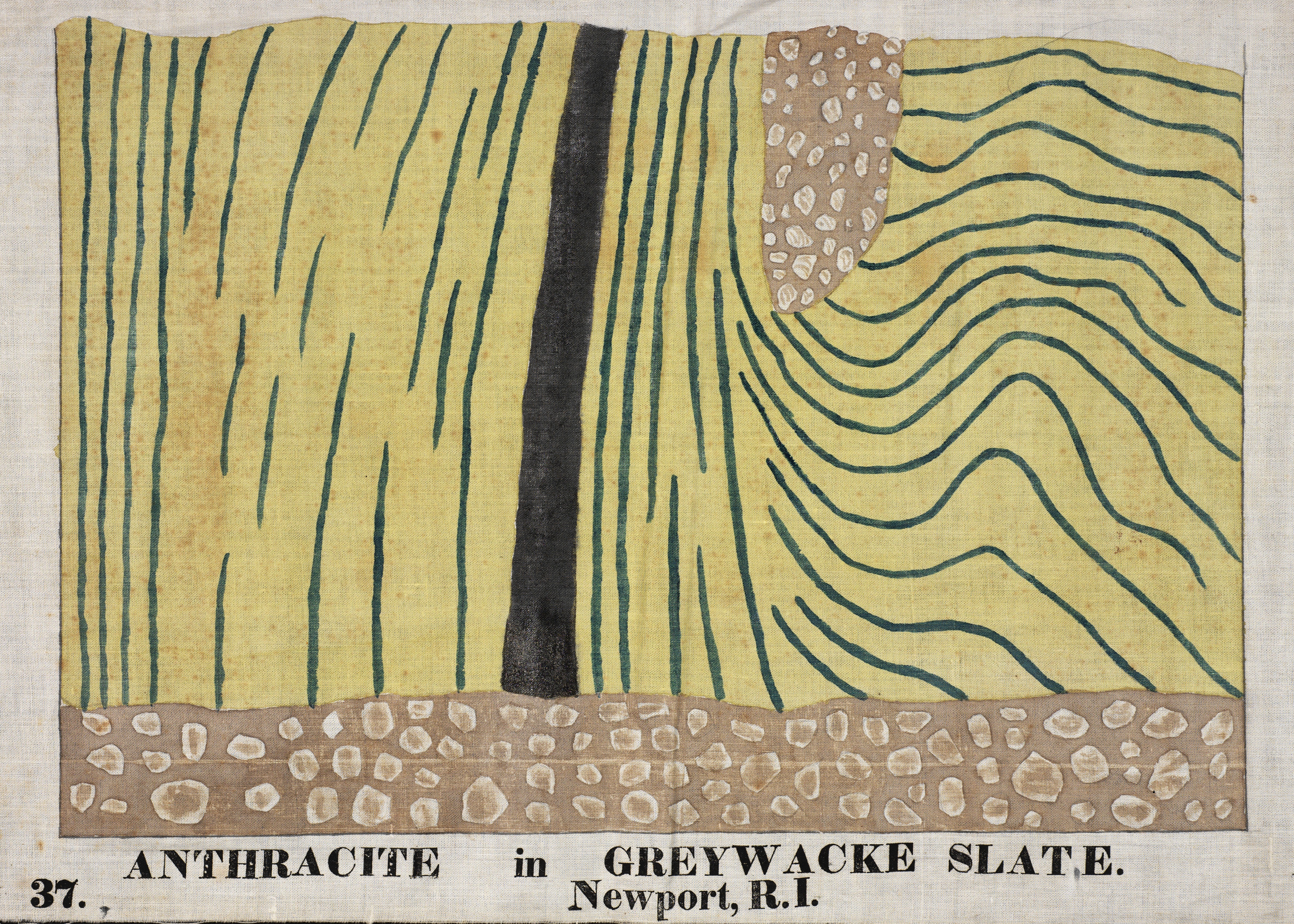 At this time in the early 19th century, the category of abstract art did not exist, and neither did accessible cameras for fieldwork. For these reasons, artists were invested in creating realistic representational paintings, and were not yet experimenting with form. Yet, it’s fascinating to decontextualize White Hitchcock’s illustrations and large diagrams and to think of them as abstract works. Although her paintings reference the tangible world, her illustrations have the potential to be viewed simply aesthetically, as works of fine art. The textures and arrangement of shapes elicit something more visually stimulating and sometimes subversive. In 25. Contortions in Clay Beds. Deerfield Ms. White Hitchcock’s squiggly line work captivates the viewer as their eyes follow the unpredictable maze-like design. The forms reference nature in a way that hints at the ideas of abstract art, depicting natural forms in an unrecognizable way. 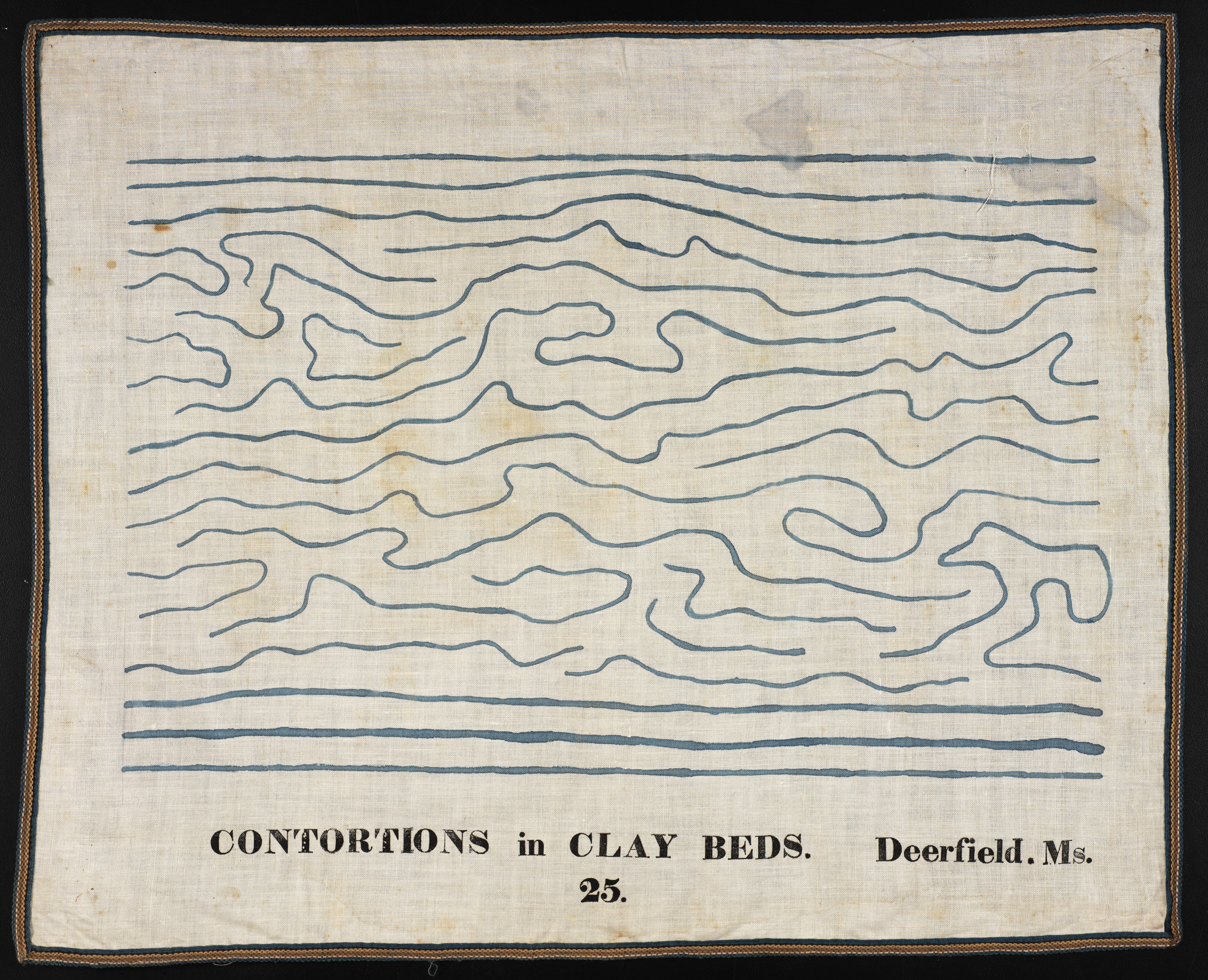 White Hitchcock made geological and anatomical diagrams covering a wide range of topics, including geology, the earth’s crust, as well as vertebrate and invertebrate anatomy, but she also continued to make smaller illustrations for Edward’s publications, ultimately creating 232 plates and 1,134 woodcuts over the years. Edward had continued success as a geologist during this early time of scientific progress, which he partially attributes to White Hitchcock’s illustrations and large scale charts. Beyond academia, White Hitchcock and Edward had six surviving children and White Hitchcock was able to seamlessly go back and forth between being a caring and loving mother and housekeeper and being a scientific artist whenever her abilities were needed by Edward. For White Hitchcock, scientific illustrations were a result of her love of science, commitment to her religion, and dedication to her husband. She saw the three interests in her life culminate in her work.

White Hitchcock did a series of large diagrams focused on invertebrates for Hitchcock’s lectures. One piece in this collection, titled 26. Octopus, depicts an octopus laid flat, likely copied from an engraving from another scientific publication. When the piece is taken out of its scientific context and assessed by viewers today, they may make the association that the octopus looks both phallic and yonic. Without the context of the year the work was produced or the artist’s intentions, one may assume the sexual visual references were completely purposeful on the part of the artist, and they may also assume that the work was produced more recently. The forms are reminiscent of works created during and after the sexual liberation movement when sexual imagery became less taboo and more accepted in public. 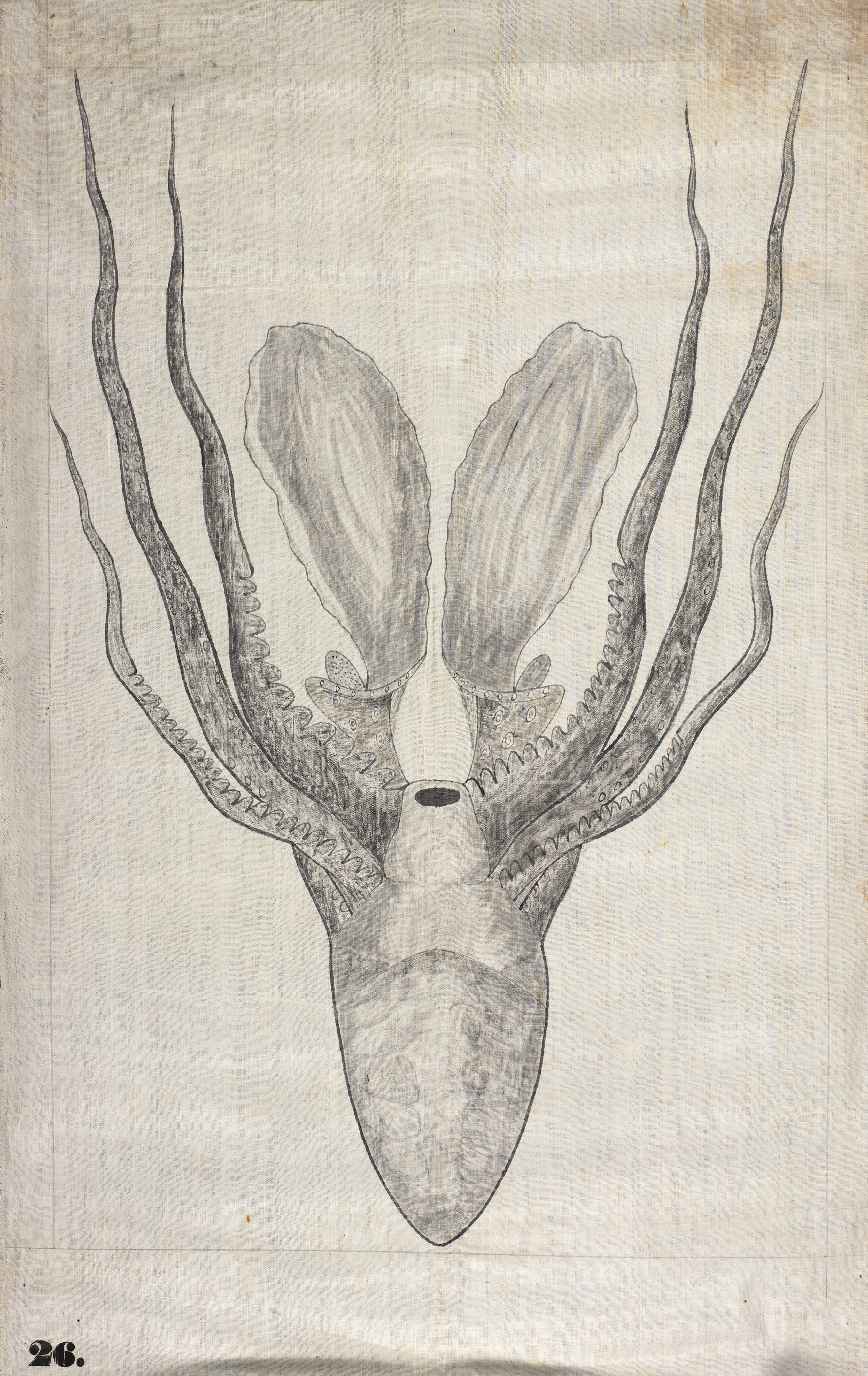 White Hitchcock’s pieces from the 19th century can easily be reinterpreted with new meanings and associations in the present when the viewer focuses solely on the aesthetics of the art. White Hitchcock’s early watercolor can be interpreted as surreal, her geological illustrations can be viewed as abstract art, and her figurative animal illustrations can be reinterpreted as subversive pieces of art.

White Hitchcock’s work went widely unrecognized outside the scientific academic community for nearly 200 years. The American Folk Art Museum’s Charting the Divine Plan: The Art of Orra White Hitchcock acknowledges White Hitchcock’s artistic and scientific skills while exposing her work to a larger community. Images that seemed mundane and worthless outside of academics in 19th century feel contemporary and socially engaged in the present.

Charting the Divine Plan: The Art of Orra White Hitchcock (1796–1863) is curated by Stacy C. Hollander, Deputy Director for Curatorial Affairs, Chief Curator, and Director of Exhibitions at the American Folk Art Museum. The exhibition is on view through October 14.