Ivan Velez: Bronx Haiku is a retrospective at the Bronx Museum of Art displaying cartoon and activist work by Ivan Velez on view through this Sunday, October 22. The exhibition is set in an intimate space with a mix of framed works and drawings hung directly on the wall. There is also a television playing clips of interviews along with Velez’s video work. Underneath, pieces of white paper are taped to the desk with various haikus written by Velez. These works, along with other more personal pieces—such as one framed trading card—make the exhibition intimate and personal. The Bronx Haikus, specifically, weave together Velez’s life and career through anecdotes, musings, and reflections. One reads:

“Fuck this fear” is emblematic of the extensive work of Ivan Velez. Growing up gay and Latino in the South Bronx during the 1960s, Velez was faced with countless obstacles and found solace in the animated world. He remarked during an artist’s talk held at the Bronx Museum of Art that being gay led him to a world of the imaginary; for him, comic books were a place to be free. Still, the animated fantasies of comic books reflected the society and were overwhelming white and heteronormative, the assumption that binary gender and heterosexuality is the default. This lack of representation fueled Velez to focus on creating his own works where he could integrate his own experiences. 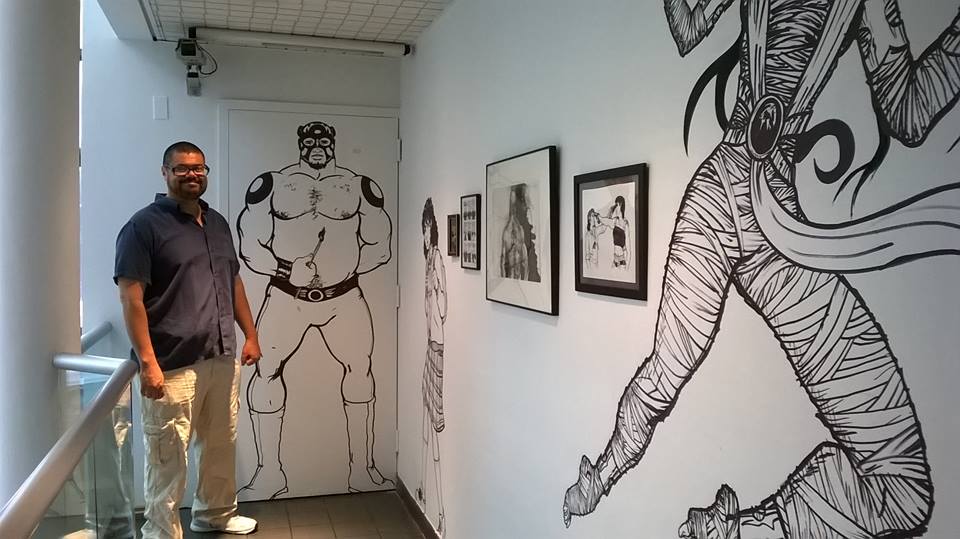 His first commercial work in animation was making posters as public service announcement to alert and inform people about AIDS during the epidemic in the 1980s. While Reagan willfully ignored thousands of deaths from AIDS, then known as the “gay plague,” activists in local communities worked to inform people about HIV prevention, and risk factors associated with the disease. The posters in the exhibit are concise, and pointed; however, at the time it was a struggle to stay up to date with correct information. With little government funding, much of the treatment had to be experimental and when certain treatments failed, Velez and other activists working in the field had to quickly adapt and make new fliers. The fliers, which are framed on the wall, all have cartoony elements yet are serious and direct.

In 1987, Velez created his own comic book series, Tales of the Closet. Based in Queens, this series explored the lives of queer teenagers growing up in a time of discrimination. Velez’s diverse characters embodied a wide range of experiences and were a strong antithesis to other comics, which mainly featured straight white characters such as in the popular series Archie. However, unlike the petty high school drama in Archie, Tales of the Closet was dark, introspective, and violent.  It focused on real experiences that queer people had to overcome and allowed a space for queer people to resonate with their own experiences and anxieties. Velez drew life size versions of the characters on the wall of the exhibition including one character that had been branded “FAG” during an incident of gay-bashing. 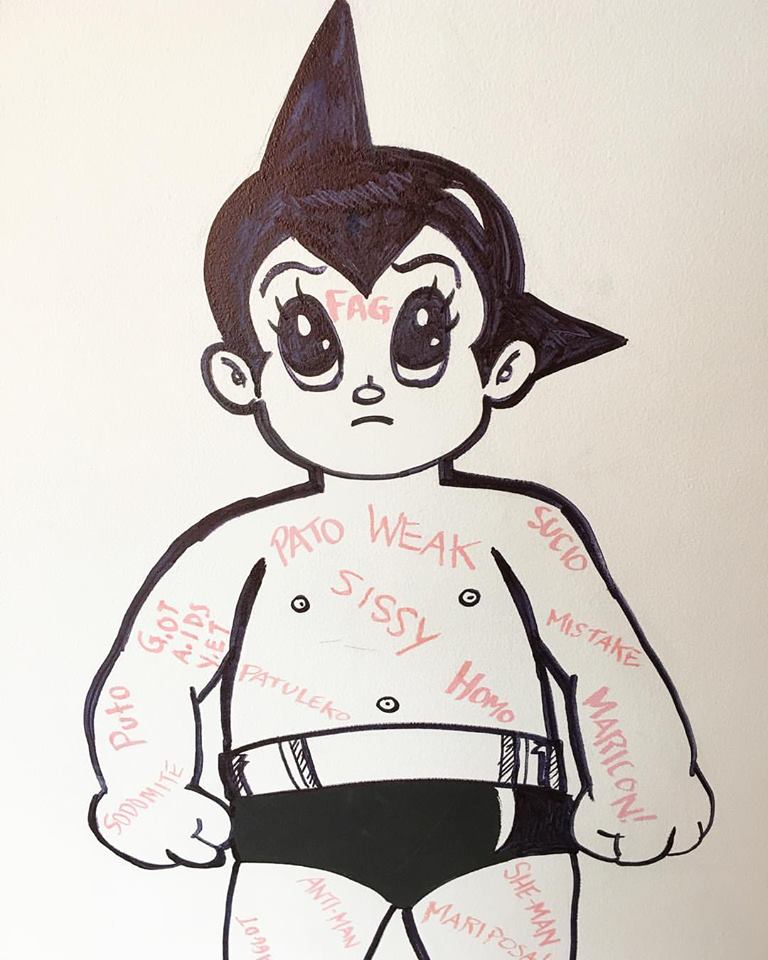 Work by Ivan Velez in his exhibition “Bronx Haiku”

After Tales of the Closet, Velez worked for the comic book powerhouses DC and Marvel, in which he experienced had an uphill battle against discrimination as both gay and Latino in the workplace. Another of his Bronx Haikus read:

Milestone Media, an offshoot of DC, hired Velez where he worked on a superhero team, known as Blood Syndicate, that better reflected reality with characters coming from different backgrounds—something largely unheard of in the comic book world even as late as the 1990s.

Velez’s current project, The Ballad of Wham Kabam, works to rewrite the whitewashed mythologies of American history and takes a multicultural perspective. One such example is of the Taino people who were decimated by Christopher Columbus and other European colonists. History speaks of the Taino people as weak and primitive in many mainstream references when in reality they were a complex civilization that fought white supremacy fiercely after being colonized and enslaved. His story aims to link together different time periods that were integral to white colonization: starting with Christopher Columbus’s arrival and the beginning of the European colonization of North America and spanning to the present day, covering the Civil Rights era, Japanese internment during World War II, and 9/11. 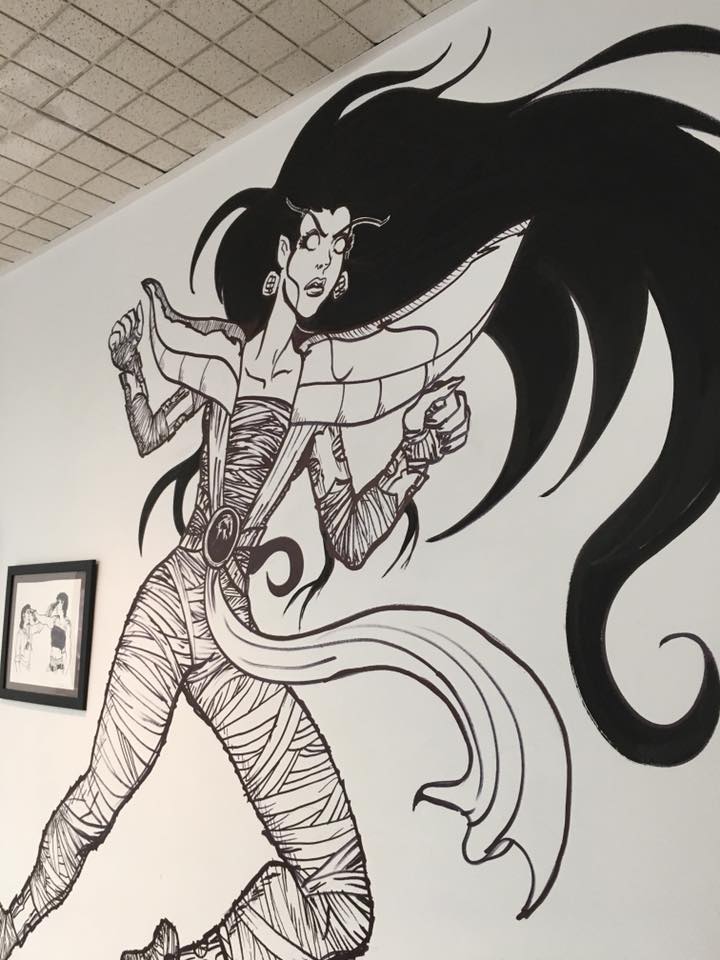 After occupying the space, seeing the diversity of characters sketched on the walls, and hearing Velez speak about his work, the best way to describe his career is empowering. Velez’s thirty-year career proves that art can be an important means to break the white and heteronormative default that stifles underrepresented voices; and allow for better representation of all peoples. During Velez’s talk at the Bronx Museum, a young Latino boy commented that he loved Velez’s work because “it allowed him to see other brown people.” The importance of representation could not shine more clear than at that moment. The boy spoke about how he creates his own comic books and, hopefully, will one day be successful, in part due to people like Velez and the ground he paved for other marginalized people. Through both his work and his calm demeanor, Velez has repeatedly said “fuck fear,” paving the way for those brutalized by the same systems of oppression engrained in American society and societies elsewhere following the legacy of colonization.

Ivan Velez: Bronx Haiku is at the Bronx Museum through this Sunday, October 22.