Marilyn Minter is known for creating work that is sensual, fashionable, and visceral. But, Marilyn Minter: Pretty/Dirty, an exhibition currently on view at the Brooklyn Museum, renders all these crucial elements secondary, highlighting the effort and intention behind the artist’s forty-seven-year body of work instead. The exhibition guides visitors through Minter’s practice, giving the impression of a narrative that is greater than the sum of its parts by parsing the individual elements of Minter’s conceptual and visual vocabulary. Laid out relatively chronologically, the exhibition presents everything from early Pop Art inspired experiments to photographs of Minter’s process, to the artist’s most controversial, sexually charged paintings. By the end, Minter’s newest works—massive, glossy, fingerprint laden Photorealist paintings that are increasingly abstract in subject—seem a logical culmination of her skills and a jumping off point for future exploration.

The retrospective spans 1969 to the present starting with Coral Ridge Towers, a series of candid photographs Minter took while still an undergraduate. These photographs show the artist’s secluded, drug-addicted mother wearing her daily wardrobe of a nightgown, aging wig, and moldy acrylic nails around her Florida home. From this point, Pretty/Dirty traces Minter’s relationship with beauty and the profane. The exhibition follows this relationship from the Coral Ridge Towers images to Minter’s early Photorealist paintings of messes on domestic linoleum floors. Marked by a strong relationship with honesty, sexuality, and feminism, Marilyn Minter’s work, according to Minter herself, has at times been narrowly categorized and even stigmatized by the art world. Coral Ridge Towers and the early Photorealist paintings confront viewers with these uneasy relationships, and represent both of the varied creative impulses Minter would later combine. 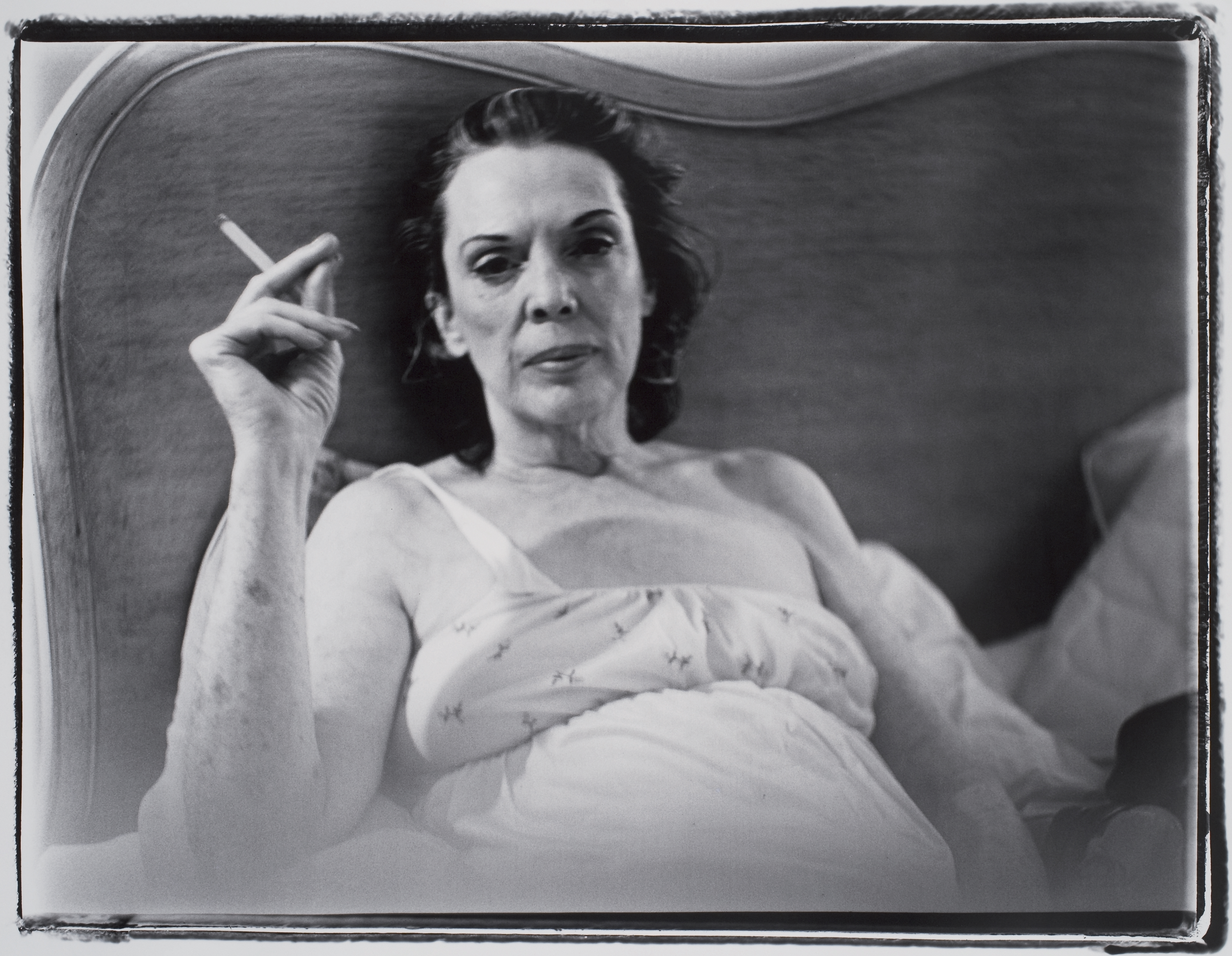 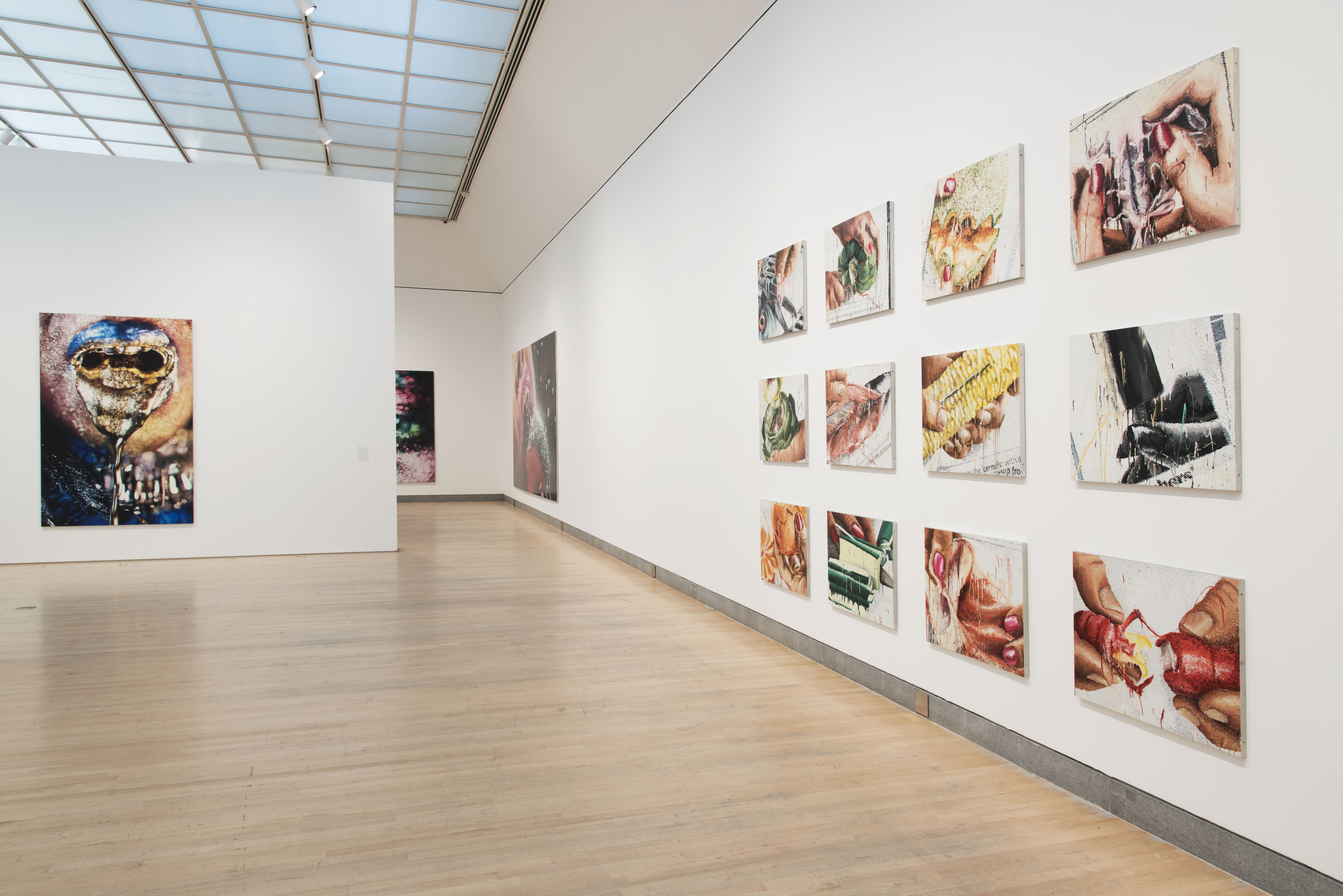 From her early photographs of her mother to her work with porn and food, to her present exploration of fashion, Minter teases out the relationship between revulsion and beauty, reality and artifice. Layers of vibrant aesthetic control are folded into every point in Minter’s process, and labor is evident in both content and execution. Minter’s effort in making, first apparent in the faithful Photorealism, the rough painted frames of the Coral Ridge Towers works, and the freely dripping paint in the food and porn works, is amplified by the focus on her newer works and process as the exhibition continues. Yet, like the content of the images, the image making maintains spontaneity. Minter finds facets in each work that are unintentional, the result of quickly taken photographs of the carefully composed situations. The final layers of enamel are painted onto each Photorealist surface using the artist’s fingers rather than brushes. Like the freckles, stray hairs, and pimples in Blue Poles, which render the model and her blue eye shadow more compelling, these unintended slips highlight Minter’s effort and find a balance between beauty and imperfection. Since working with Christof Kohlhof in the 1980s, Minter has mixed her photography with photorealistic enamel painting on metal. Each painting works in tandem with its corresponding photograph, layers of Photoshop intervention, and carefully chosen makeup and clothing, placing the base and beautiful in fashion under a microscope as Minter exerts control in every layer of the image making. The attempt at visual control over the body (glitzing it up) seems both inadequate in the face of the grotesque human form and a natural extension of its existing beauty. 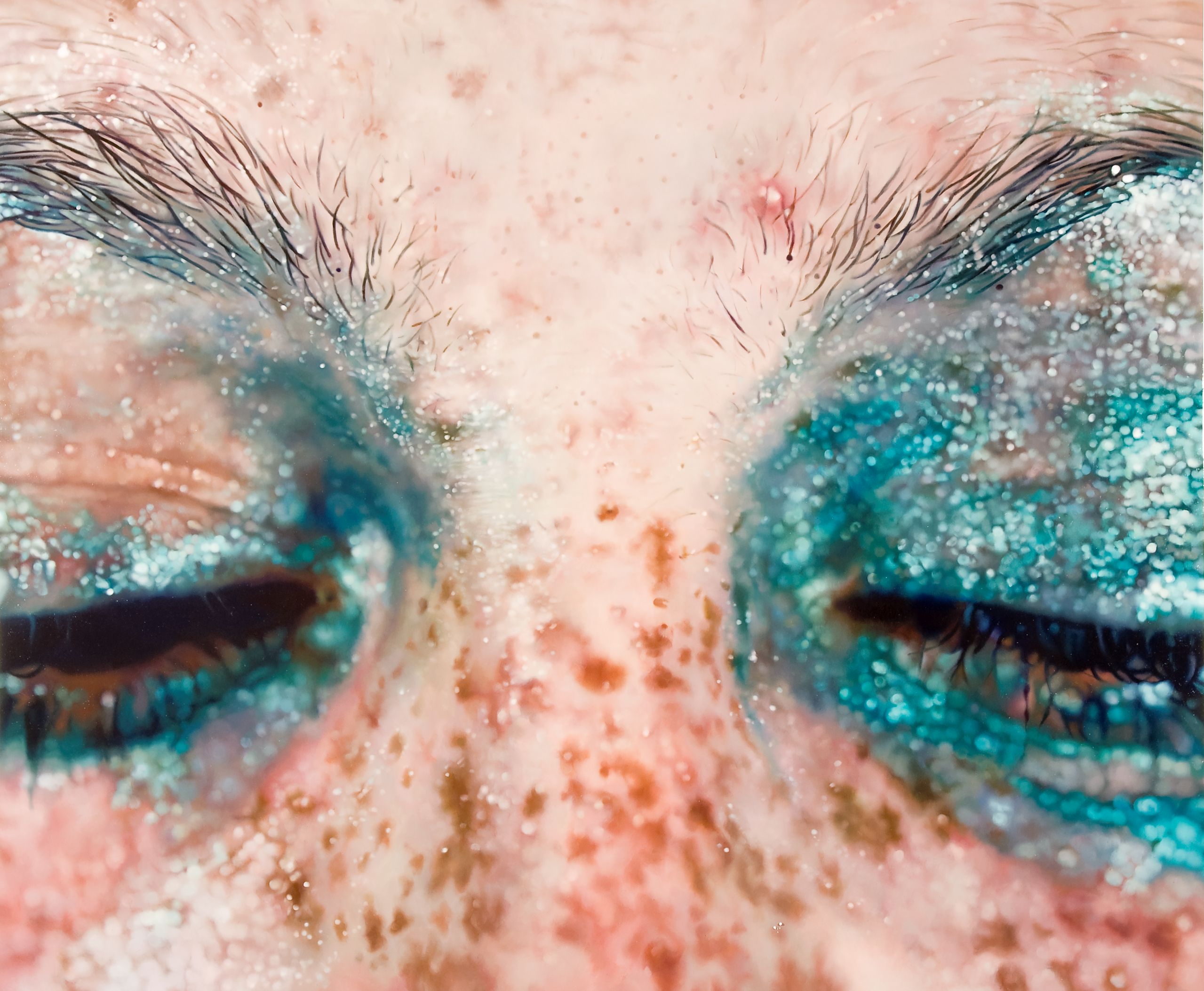 Two videos give further attention to the sense of movement and labor in Minter’s imagery. The video Green Pink Caviar serves as a halfway point in the exhibition, projected on a full wall. In size and focus, the video makes the most of the physical actions of the mouth: spitting, sucking, and licking pigment at a confrontational scale. Like the paintings, the image here is tactile and sensual, the mouth performing actions somewhere between throwing up and eating, but always toeing the line between its function and aesthetic or sexual appeal. The choice to organize the show relatively chronologically creates an impression of potential and finality in the last works on display. The final piece, Smash (2014), is a video work originally created for the Brooklyn Museum. In the film, silver feet and shoes move slowly through silver rain, behind a layer of glass. The shattering of the glass and loss of camera focus in the film perform one last abstraction, so that the body and makeup is nothing but light, shadow, and mist. Minter’s increased use of both Photorealism and abstraction in painting meet in this film, which is intentionally styled and at the same time allows for unpredictable elements like shards of glass and pigmented rain. Among the artist’s most famous subjects in recent years, the shoes consolidate many of Minter’s impulses into one film. 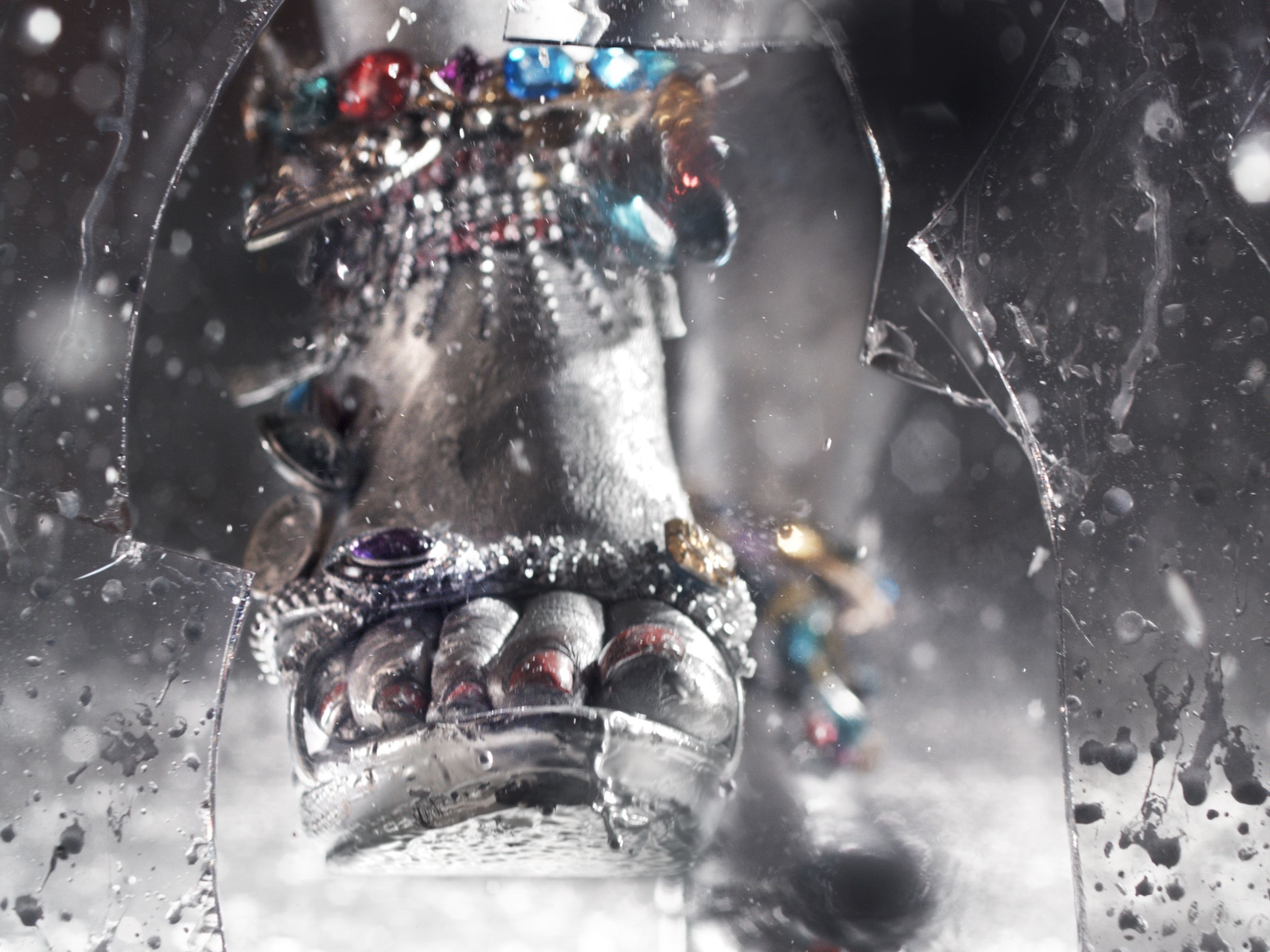 Minter’s work, as presented in the exhibition, has grown more abstract and stylized in its depiction of its most sensational subjects, and evolved in a world where the relationship between pornography, fashion, and art is vastly different from Minter’s 1960s origins. Where at first Minter’s focus on fashion, pornography, and amplified images of the body drew on what was presented to the artist as debased, the same ingredients now form a category of art to which Minter can identify. The feminine grotesque ties Minter to younger feminist artists working with similar issues of physical reality, agency, and presentation. Even as the nature of Minter’s work changes in the face of morphing societal perspectives, the effort that goes into the work, and into the makeup, or food, or attentive Photorealism, remains. Some viewers may be repulsed, others aroused, but action, and particularly feminine action, remains a central element of Minter’s image making.