Revered by architects worldwide and highly esteemed in Brazil, Roberto Burle Marx (1909–1994) is considered one of the most influential landscape designers of the twentieth century, and yet he remains largely unknown beyond his home country and professional milieu. A true polymath, Burle Marx put his ingenuity at use in multiple disciplines from painting and sculpture to jewelry, ceramic, and set design. Roberto Burle Marx: Brazilian Modernist, on view at The Jewish Museum until September 8th, presents the full spectrum of his multifaceted work and covers his long and prolific career from the early 1930s to the end of the century, including nearly 140 objects from plans, drawings, and maquettes to textiles, tilework, and jewelry pieces. 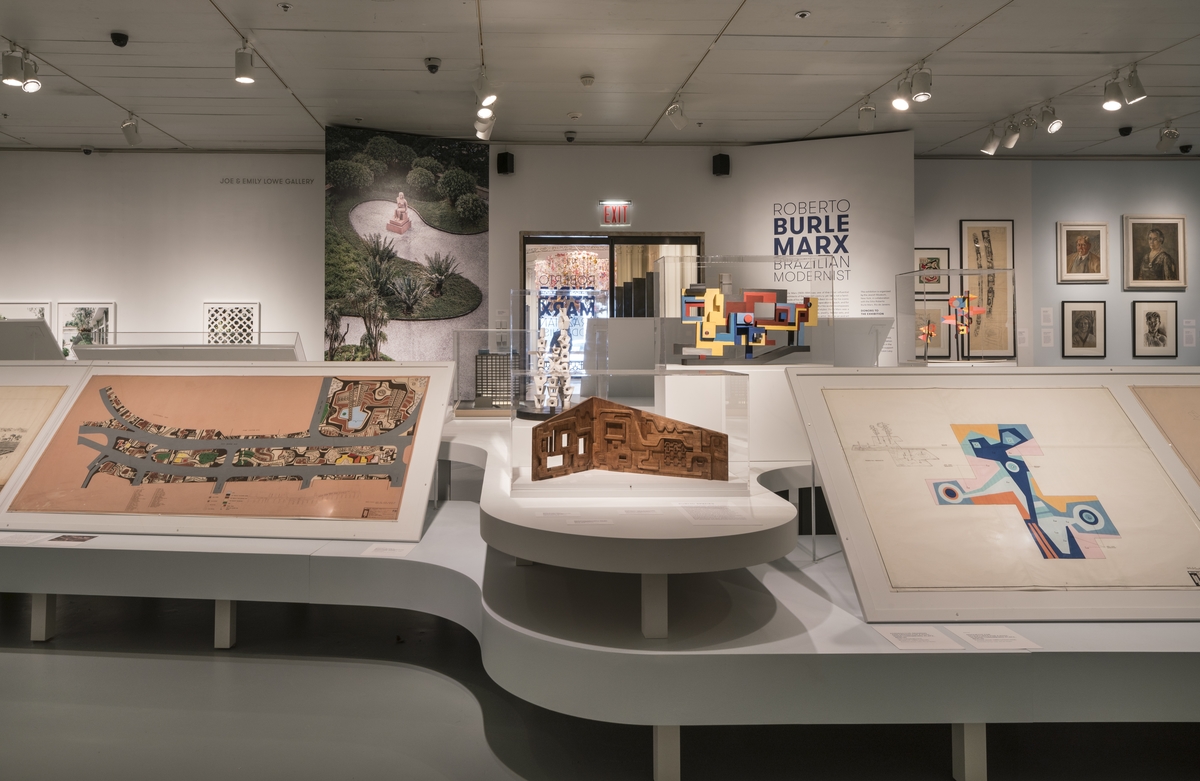 Born in São Paulo to a German Jewish Father and a Brazilian Catholic Mother, Roberto Burle Marx was raised in Rio de Janeiro, inheriting from his family a rich cultural background and a profound love for nature. In 1928, on an eye-opening trip to Germany, he rediscovered flora native to Brazil—bromeliads, heliconias, philodendrons—which though celebrated in Berlin’s Botanical Garden, were discarded as weeds and scrub in his home country. Burle Marx became a pioneer advocate for the conservation of Brazil´s rainforest, discovering over fifty tropical species and incorporating them in his landscape designs. He revolutionized the discipline by defying European traditions that remained unchallenged for centuries and envisioning the tropical garden as a modern paradigm. Embodying his Brazilian identity in plan and plant, Burle Marx’s biomorphic compositions emphasized the lush colors and textures of local varieties, transporting to landscape design the distinctive sensuality of Brazilian Modernism. 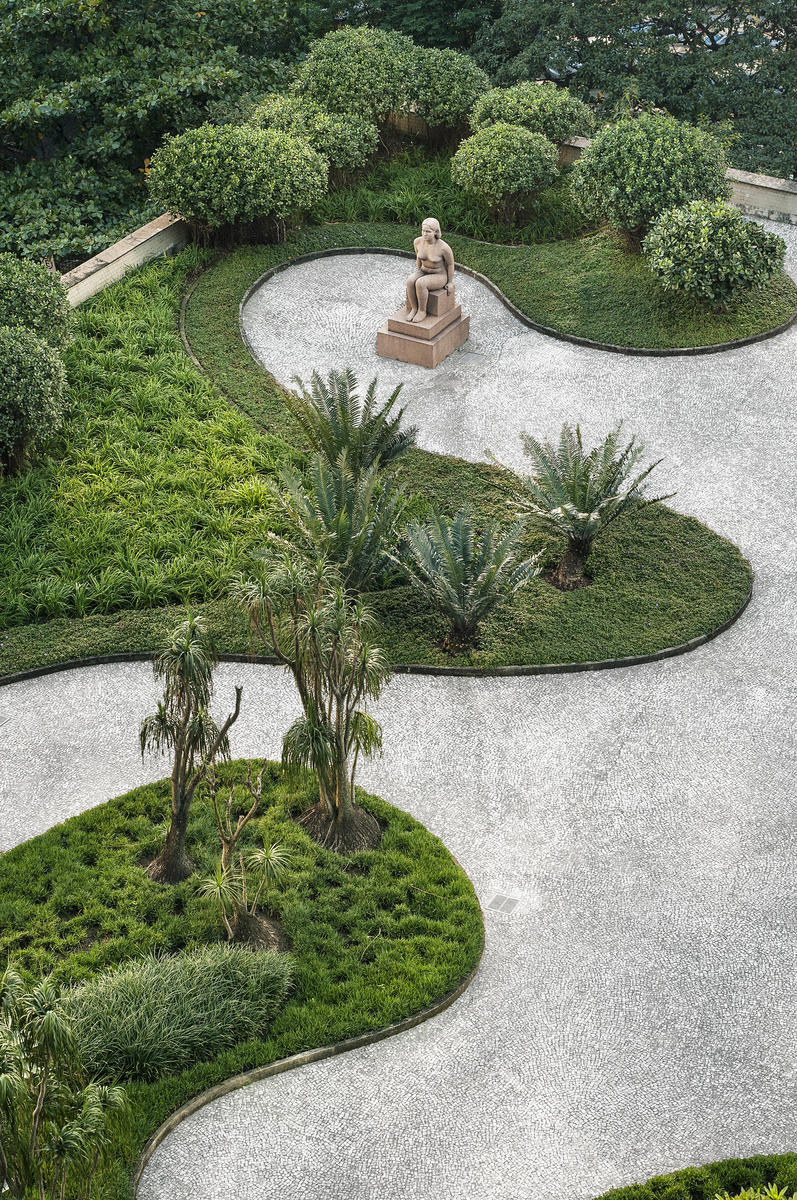 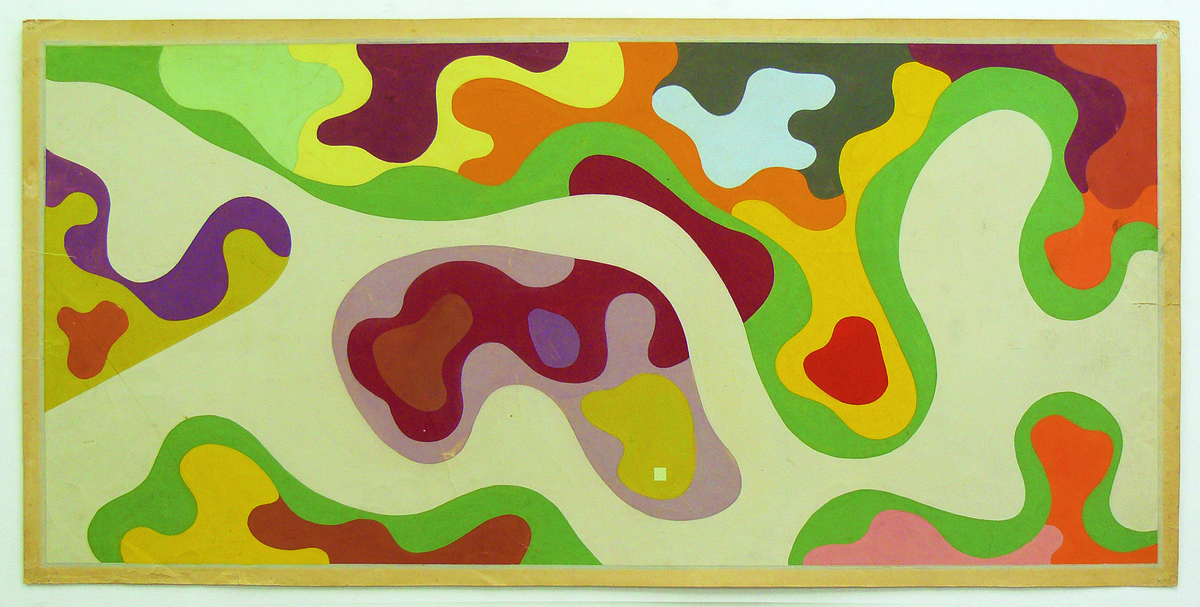 Burle Marx began his career as a visual artist, studying under renowned painter Cândido Portinari, and the exhibition includes a substantial number of canvases and drawings, many from his early figurative style, reminiscent of Matisse and Picasso. Without a background in architecture, Burle Marx sketched his first garden designs as perspective drawings of reimaged Edens, and later he started to explore organic shapes of leaves and flowers more freely, steering toward abstraction.

It was in his design for the Garden of the Ministry of Education and Health, in Rio de Janeiro, 1938, where he first broke away with the rigidity of traditional French gardens, creating sinuous flowerbeds with sumptuous tropical specimens. A colorful gouache plan for this roof garden featured in the show stands on its own as a vibrant abstract painting. Among his numerous private and public commissions across Brazil and abroad, the swirling seaside pavement of Rio’s Avenida Atlântica is surely the most iconic. Flowing patterns featuring unique motifs in white, black, and red-brown stone form a monumental abstract composition drawn along the two-mile length of Copacabana beach. 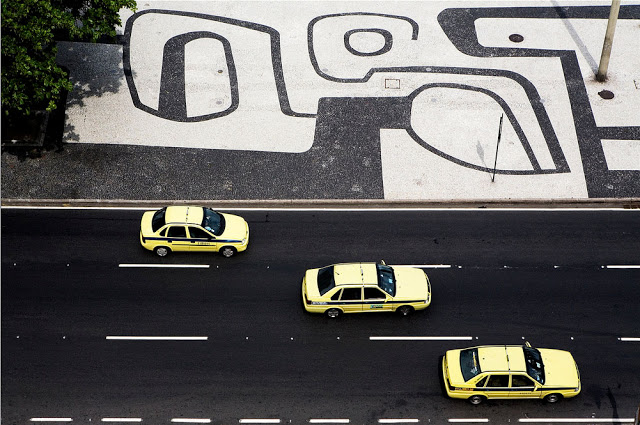 Burle Marx’s work is unique in its synthesis of artistic values and ecological concerns. He demonstrated how garden and urban design could be radicalized just as the visual arts were with the advent of Modernism, recalibrating the relations between nature, humanity, and the built environment. Exploring landscape as canvas and flora as pigment, Burle Marx played with the pictorial and sculptural attributes of different specimens, ever mindful of their biological interactions.

The exhibition traces his adaptation of a distinct biomorphic modernism to various art forms, including examples of his expressive tiled murals, sculptural wall reliefs carved in wood and stone, and exquisite jewelry pieces created from thick gold and opulent gems. An impressive eighty-seven feet long tapestry, woven for the Santo Andre Civic Center in 1969, fills the back wall of the main gallery, transporting into the interior space the tropical atmosphere of his iconic gardens. 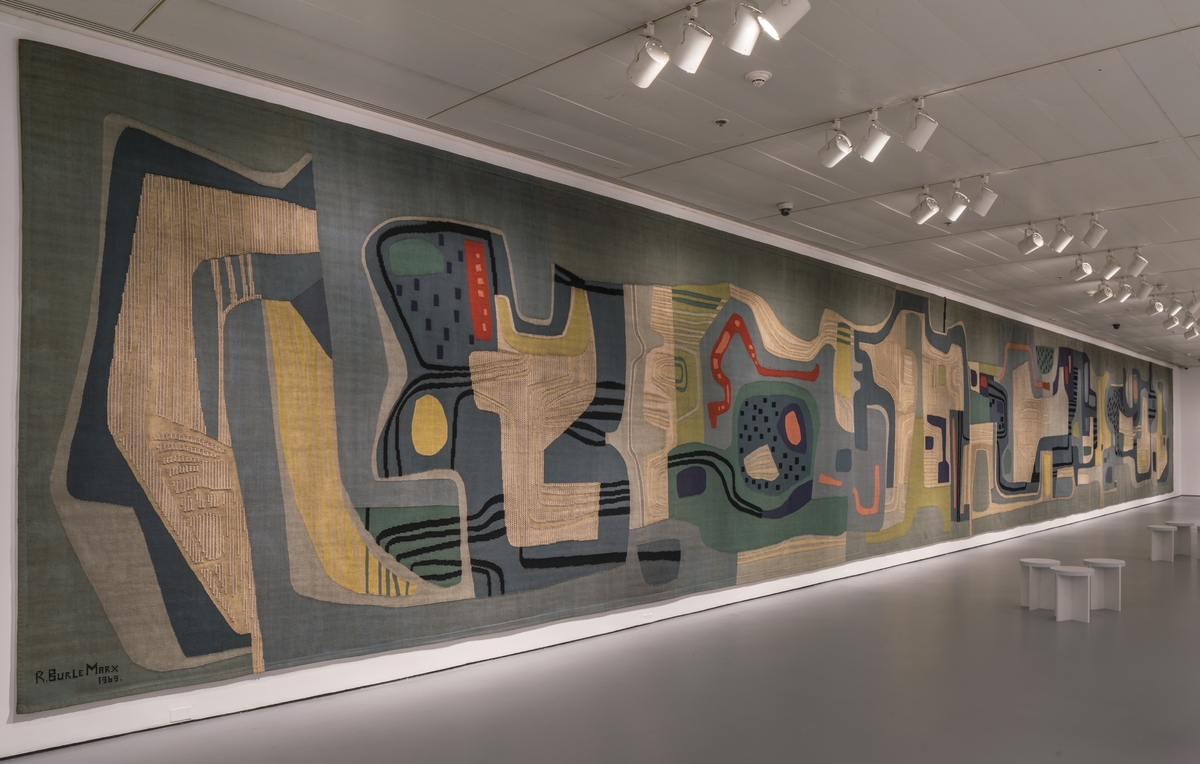 The final gallery is devoted to the artist’s home and collections. In 1949 he acquired a former plantation in the outskirts of Rio where he housed his impressive collection of pre-Columbian ceramics, eighteenth-century religious paintings, and Brazilian folk art. Later donated to the government, Sítio Roberto Burle Marx reflects a lifelong dedication to nature, art, and vernacular Brazil, including a greenhouse collection of 3,500 different strains, an ever-changing garden, and a welcoming home overflowing with the art he created and objects he collected. 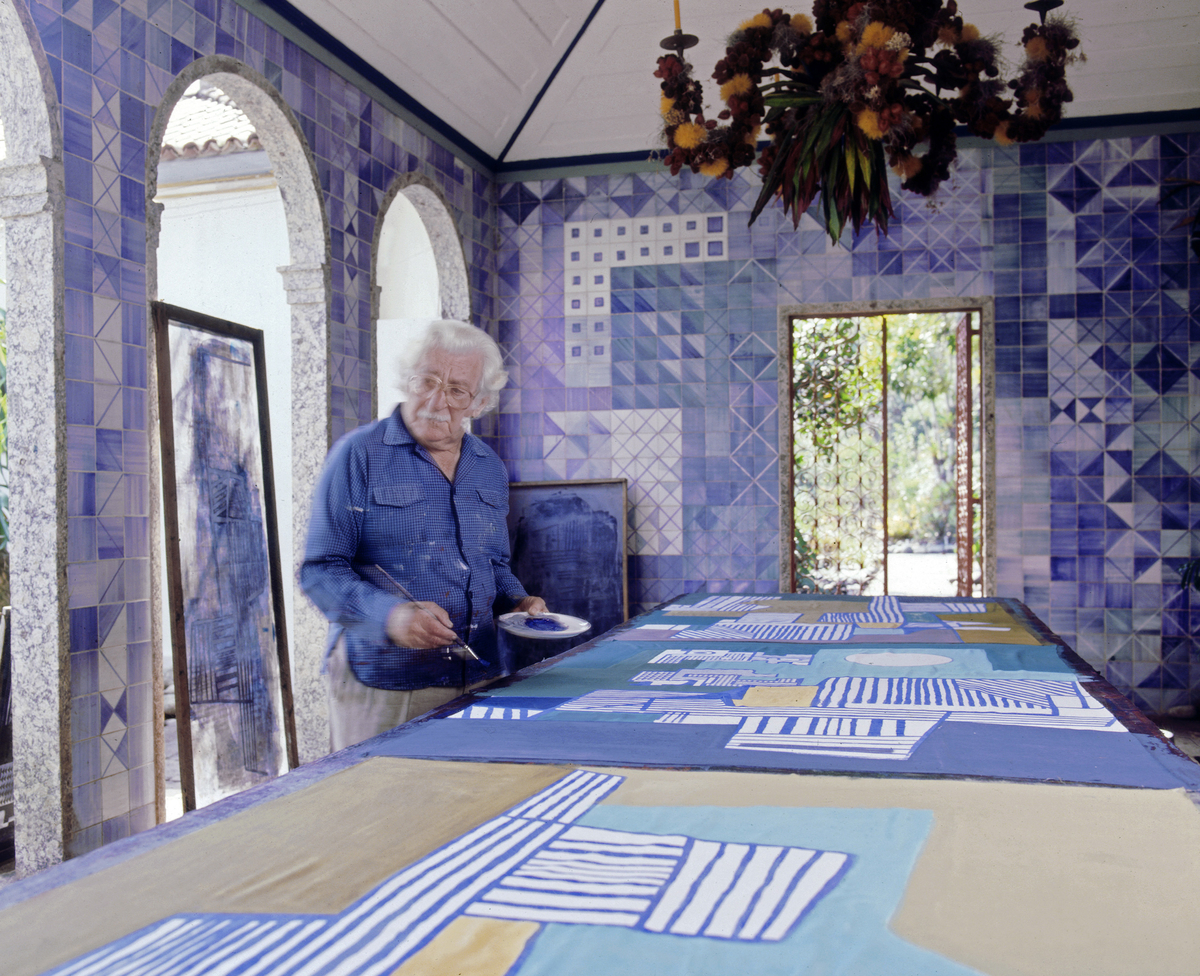 Roberto Burle Marx painting a tablecloth in the loggia of his home, 1980s; the azulejo tile walls and chandelier composed of fruit and flowers on a metal armature are his work. Photograph © Tyba.

Attesting to Burle Marx’s influential practice, curators Jens Hoffman and Claudia J. Nahson selected artworks by seven contemporary artists that pay tribute to his ingenuity. The selection appropriately extends across media, including a film by Dominique Gonzalez-Foerster, a soundscape by Arto Lindsay, photographs of Luisa Lambri, and sculptures by Beatriz Milhazes.

Roberto Burle Marx: Brazilian Modernist reveals the breadth of the artist’s work and the consistency of his holistic practice, mastering scale and composition, from an urban promenade to a gilded bracelet. A tireless inventor and devoted naturalist, Burle Marx stands as a testament to the graceful concurrence of creativity, love for local culture and respect for natural resources.