A potent figure of conceptualism and minimalism, Sol LeWitt and his legacy will not be forgotten as his art remains not only within the confines of various cultural institutions but also in shared spaces in the greater metropolis. LeWitt’s ideas about art played a prominent role during the transition of art from modernism to postmodernism. Rather than pushing art to an absolute end, creating definitions and answers, LeWitt’s approach to art was open-ended and playful. Putting concept at the center of his work, LeWitt pieces can be realized in myriad ways by any producer. His murals, going through many permutations, will never stray too far from the “LeWitt aesthetic” since they are always built on foundational rules, such as geometric principles and color theories. Not surprisingly, these characteristics allow LeWitt to be present in public spaces, from instructional manuals to large scale wall murals.

In anticipation to the upcoming exhibition at The Drawing Center, Drawing Dialogues: Selections from the Sol LeWitt Collection, curated by Clair Gilman and Béatrice Gross, we would like to point to Sol Lewitt pieces located around New York City. 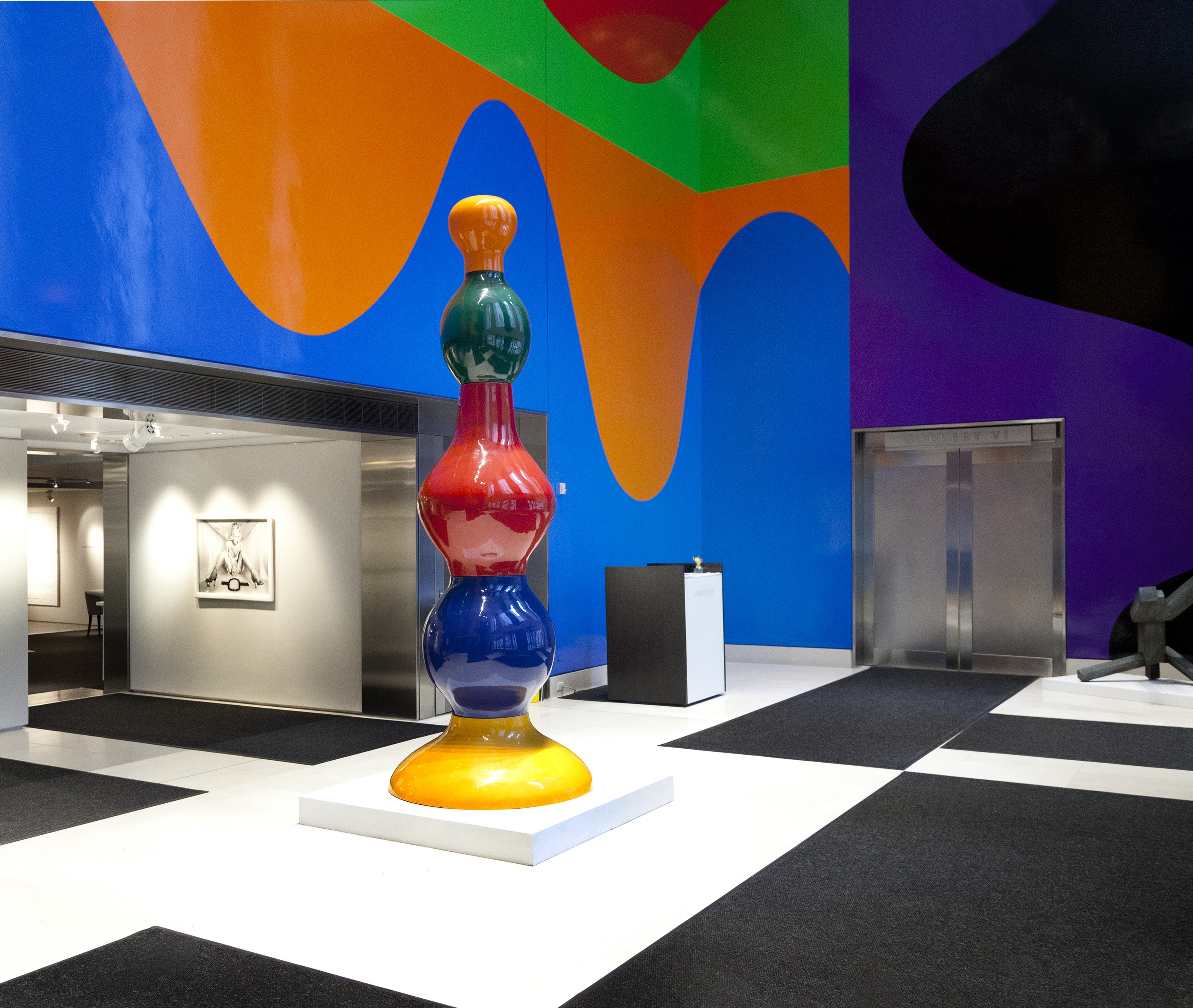 The three story mural was created for Christie’s opening at 20 Rockefeller in 1999. It engulfs three sides of the room, welcoming visitors as they move through the main entrance. Visible from the streets through the building’s glass and steel façade, the mural consists of bold wavelike curves and straight lines that divide contrasting colors. In a New York Times article, written during the making of Colors/Curves, LeWitt stated that he treated this “work as a giant panel, like a fifteenth-century gesso painting.” Sanded and varnished seven times, the mural appears to be glossy and impeccably smooth. 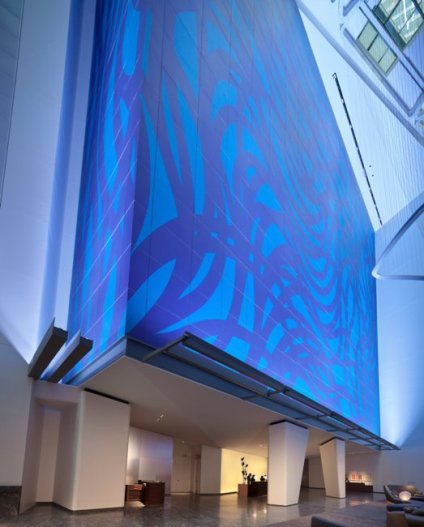 Before Goldman Sachs purchased the downtown building in 2006 from Embassy Suites, Sol LeWitt’s ten-story mural, Loopy Doopy (Blue and Purple), has already been sitting on the atrium wall since 1999. Upon renovation, the building was turned into Conrad New York, a luxury hotel located in Tribeca. For the renovation of the building, architect Monica Ponce de Leon of Kohn Pederson Fox Associates responded to LeWitt’s mural while redesigning the sixteen-story exterior and the overall interior design. Transforming the atrium into a more spectacular space, the exterior of the hallways became modernist and minimal, tubular triangles and rectangles are hung along the center of the atrium on strings, and lighting effects, designed by Herve Descotte’s L’Observatoire International, are installed throughout the hotel. Additional to the LeWitt mural, the hotel also accommodates a number of modern and contemporary art pieces, including works by Pat Steir, Imi Knoebel, Mary Heilmann, and many more. A guide to art in the public spaces of the Conrad New York is available at the Concierge desk. 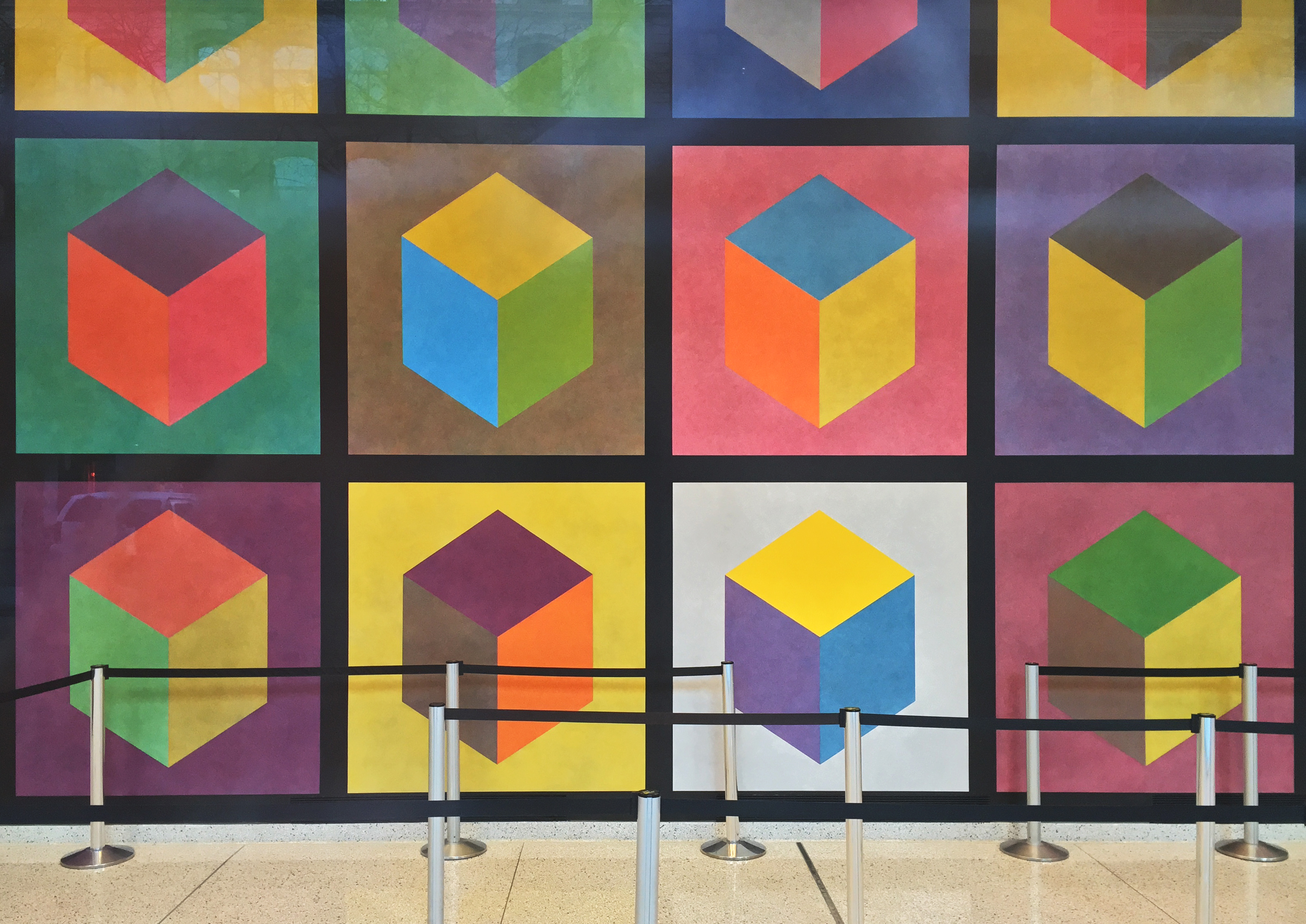 Located on the Worth Street corner of the Jacob. K. Javits Federal Building pavilion, Wall Drawing #746 was first created in 1994. The instruction for this wall drawing reads: “Identical cubes with color ink washes superimposed on each plane.” The mural includes thirty-six identically sized cubes. Each cube has the same composition with a different color combination.  The work is set to remain at the Federal Plaza at least for twenty years, and up to thirty years. 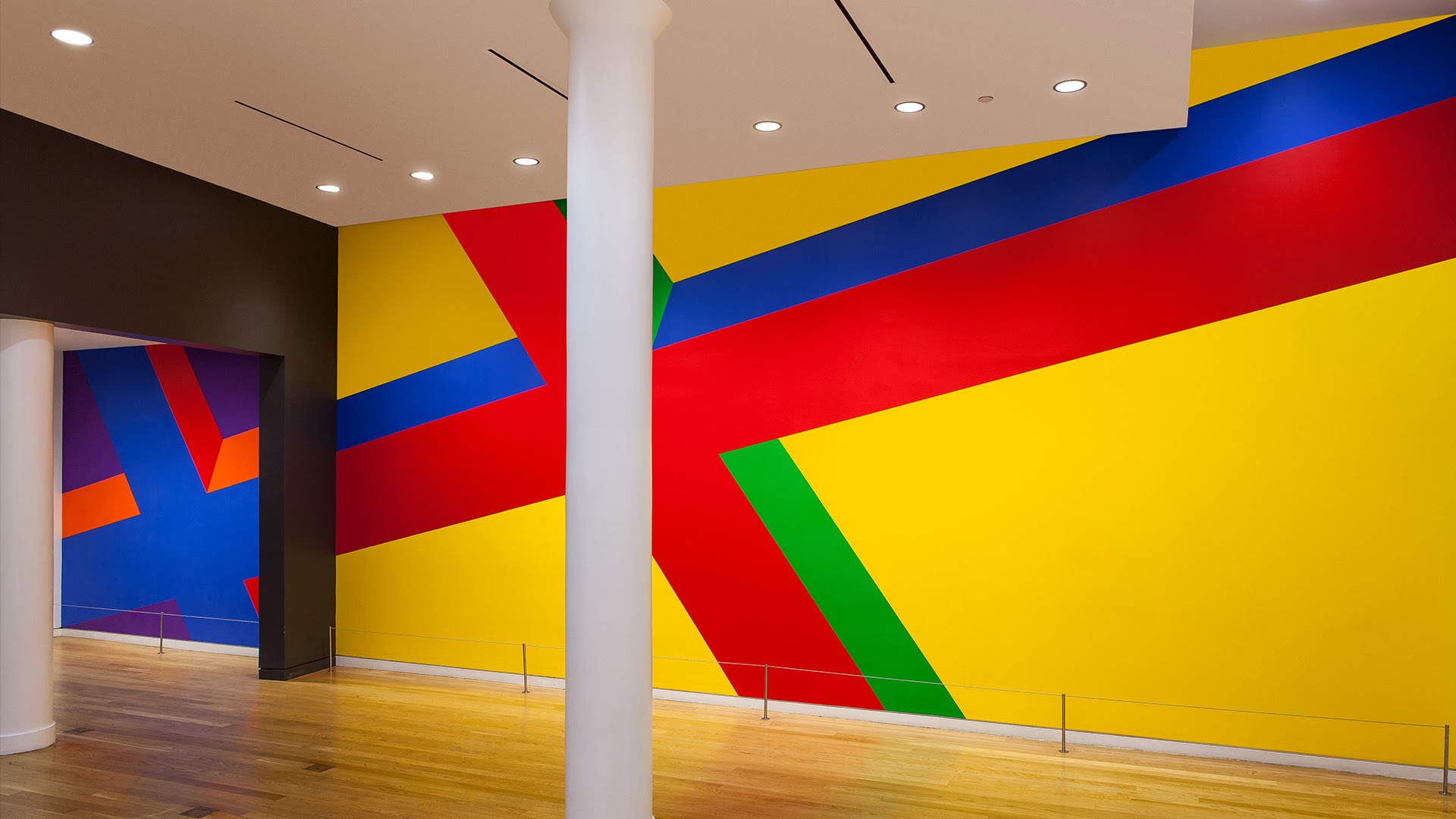 The New School has invited artists to create murals for its buildings throughout its history, including works by José Clemente Orozco, Kara Walker, Camilo Egas, and Sol LeWitt. LeWitt’s Wall Drawing #1073: Bars of Color, one of his last commissions, was completed in 2003 with the help of Public Art Fund. The two story mural, a gift from the artist to the school, will be permanently installed in Arnold Hall, located on 55 West 13th Street.

If you get off the subway at 59th Street Columbus Circle, you are sure to see this vibrant mural by Sol LeWitt. The famous mural at the 59th street subway stop was completed in 2009 with the artist’s proposal from 2004. What is special about this wall drawing is that it is permanent. Unlike other wall drawings, created with paint or pencil, this mural is made with porcelain tiles, each cut to meet the artist’s specifications.

Drawing Dialogues: Selections from the Sol LeWitt Collection will open on April 15th and be on view through June 12th. The exhibition shows a selection of Sol LeWitt’s personal art collection, which includes over 4,500 artworks by around 700 artists. His dedication and generosity to art is not only shown through his support of his peers and friends, but also his contribution to the greater public.