Jasper Johns: Regrets at The Museum of Modern Art

Experimenting with art materials is a process normally encouraged in early childhood — getting messy with clay, smeared with glue and paint, and finding out what will hold and what will fall apart is part of growing up and becoming familiar with the world. Unexpected results, even failures provide invaluable learning experiences. However, by the time an artist reaches maturity, and certainly by the time he becomes established and world-renowned, he has usually left such experiments far behind. As adults, we know what to expect of our materials, and are more wary of failure. This is true unless the materials themselves resist all expectation, such as those that Jasper Johns chose throughout his life. Most recently, Johns utilized such purposefully precarious art materials for his series of ink drawings on plastic presented at MoMA’s Jasper Johns: Regrets exhibition.

The exhibition consists of several drawings, paintings and prints, all of which were inspired by an old, damaged photograph of a man sitting on a bed, his face covered. We know this is a photograph of Lucian Freud, but the model’s identity is perhaps irrelevant, as Johns is equally inspired by the sitter’s posture and by the tears and creases in the photograph itself. In fact, a part of the photograph that is torn and missing became a dominant presence in Johns’s images. Using the photograph as a starting point, the artist re-drew the image in pencil, watercolor and acrylic, and then transformed it by painting it in water-based ink on plastic. 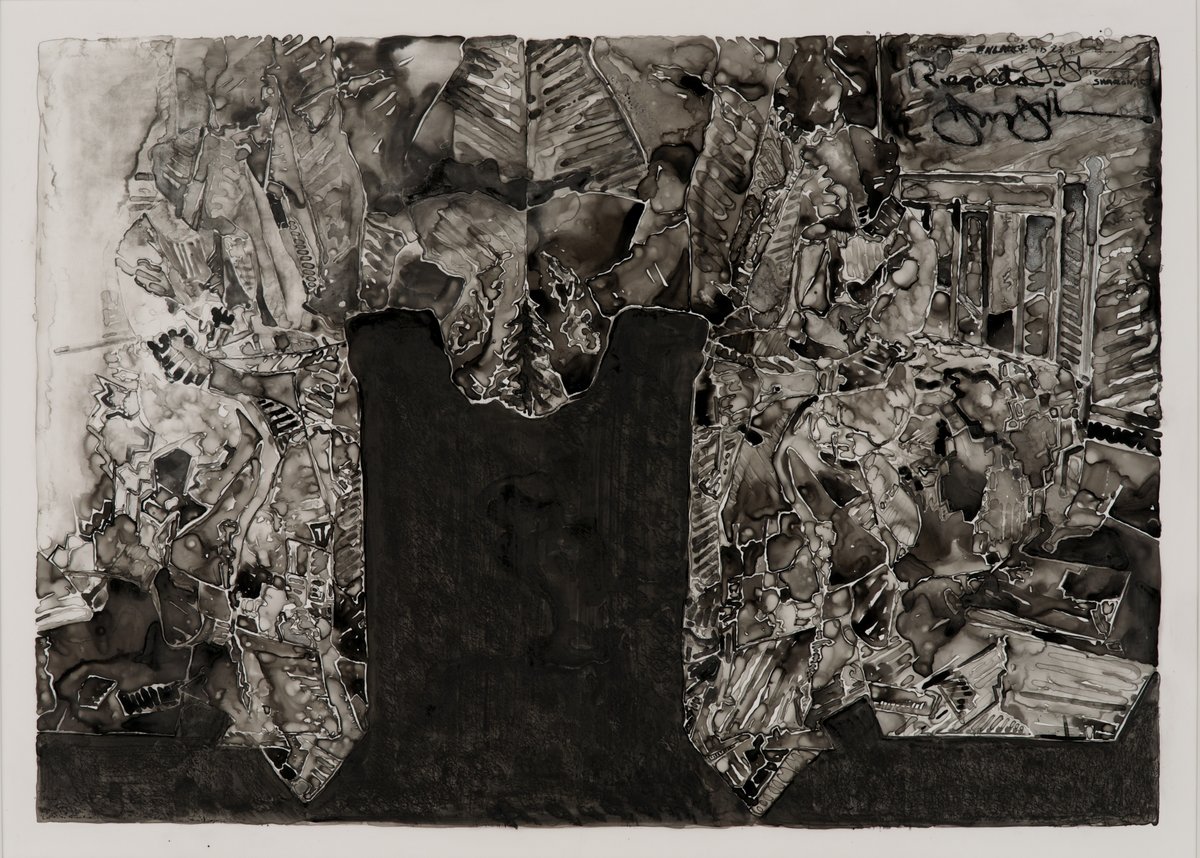 The four drawings on plastic are situated towards the center of the exhibition gallery, suggesting, perhaps, their chronological place among this group of artworks. While compositionally they are strongly related to the other images in the exhibitions, their weightlessness and luminosity makes them stand out. The composition of most of the drawings, paintings and prints in the exhibition resulted from doubling the original photo in a mirror-like reflection; a corner of the photograph that was torn away became a large shape in the center of the image. In the drawings on plastic, this large form, sometimes black, sometimes light grey, remains monolithic, while the rest of the image in each of the drawing is broken up into small fragments, each one of them carefully rendered in shades of gray. The artist may have had to paint each small section separately because the medium resists uninhibited painting. As Johns’s hand painstakingly controlled the ink floating on the slippery plastic surface, the original image was further altered. These drawings, in turn, seem to inform, in their floating, diluted form, subsequent prints and paintings from the series; the materials chosen by the artist assumed a participatory role in the process of art making.

This is not the first time that Johns painted on plastic, but with this material, experience is irrelevant — the results are inherently unpredictable. Anyone who ever attempted as a child to paint with tempera on their plastic palette, or with watercolor on the plastic cover of their school paint set, knows how impossible it is to control a liquid medium on such glossy, non-absorbent surface. It does not matter how steady the artist’s hand – the paint will pool, run, collect into beads. For most people, an experiment like this would stand as a simple lesson in physical properties of matter, and a suggestion of which materials to avoid in the future. Johns, however welcomes the continuations of such experiments in his work.

On the opposite wall of the gallery housing the Regrets series, the curators chose to exhibit recent monotypes 0-9 (2012-13). These works, although not belonging to the same thematic group, share with the other drawings in the exhibition not only the time period when they were created, but also a similar interest in experimentation with materials. Assembled from stencils, rubber stamps and textured materials, these images of numerals were printed in white ink on white paper, then submerged in black ink which dyed the paper, leaving the inked image white against the black background.

Just like with drawings in ink on plastic, these simple images are transformed through the materials used by the artist. Printing in white on white paper, then making the image visible in a black bath, is akin to actions in childhood spy games. There is an inevitable lack of control as the image remains virtually invisible until the last step is completed. The fingerprint-like forms, similar to flickering nightlights around the numeral 3, may appear as intended, or may be accidental. Despite the regular size and shape of these monotypes and the numerals in each of them, the treatment of each is strikingly different. Some are softer, some more stark. 5 looks like it is impressed on textures glass, while 9 is a mere grey ghost with white vertical streaks breaking up its form. It is conceivable that the amount of contrast between the image and the background was largely accidental, since until the background appeared it would be hard to predict the intensity of the white on white images.

Going into an exhibition with such an allusive title, I was somewhat apprehensive, but I would certainly have regretted missing it. Jasper Johns: Regrets will be on view at MoMA through September 1, 2014.