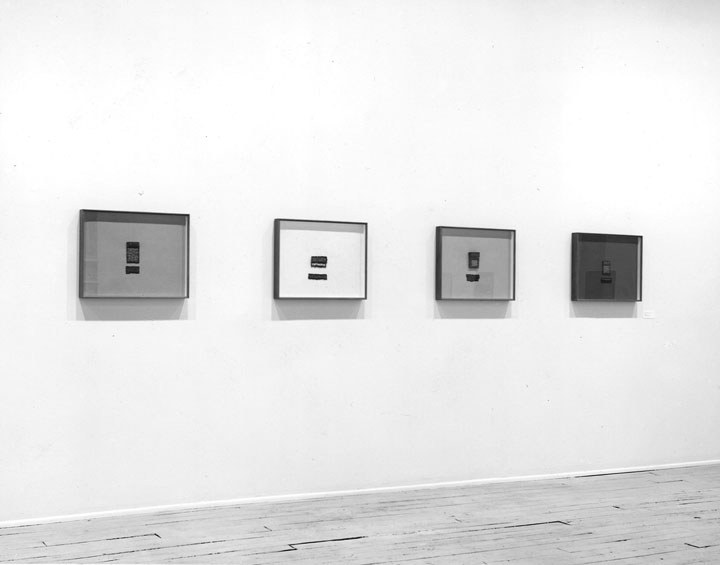 In The Drawing Center’s 1977 inaugural show, works on paper by Dorothea Rockburne, James Bishop, Ralph Humphrey, Robert Mangold, Robert Ryman, and Douglas Sanders were displayed in the museum’s new white-columned exhibition space. This show, described in the museum’s brief exhibition materials as  a “collective definition of drawing,” allowed founder and director Martha Beck, to make her first proclamation—that drawing is a diverse, complex, substantive, and revelatory medium for contemporary artists.

The contents of the show ranged from Rockburne’s paper works dipped in crude oil to Douglas Sanderson’s nail incisions in oil paint on paper. Like the other works in the show, Rockburne’s pieces were meant to showcase and celebrate the diversity of the medium, breaking the bounds of what we normally conceive drawing to be. Nearly 37 years later, Rockburne’s work continues to confound traditional conceptions of drawing, minimalism, and dimension.

Currently on view through January 20, 2014 at The Museum of Modern Art is an exhibition entitled Dorothea Rockburne: Drawing Which Makes Itself. When I first visited the galleries on a quiet Thursday afternoon (while most museum-goers flocked to the new Magritte show), I felt as if the space were swept up from under my feet. I was confronted by an almost dizzying display of bold geometric shapes and radiating lines seemingly weaving in and out of the stark white background of the walls and floors. The few other visitors in sight seemed to swirl through the space, circumambulating the raised square floor works, ebbing and flowing into their depths. 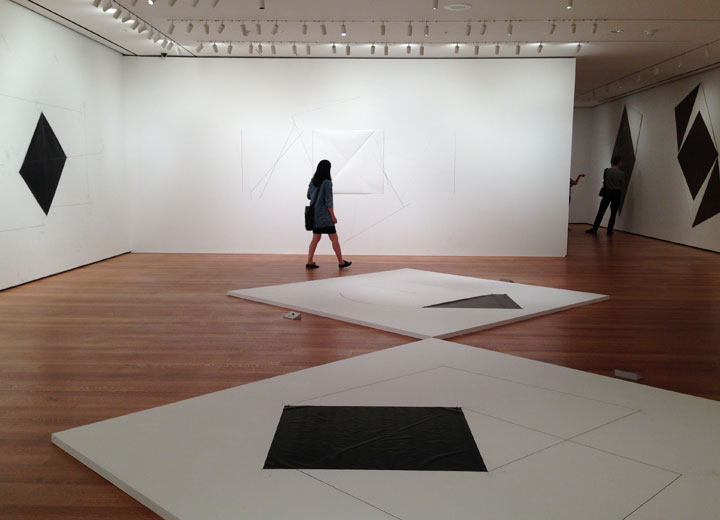 Dorothea Rockburne: Drawing Which Makes Itself, installation view at The Museum of Modern Art, October 2013. Image courtesy of Kate Wiener.

I have to admit I came to the show with some pre-conceived notions. “Drawing which makes itself”: this must be a comment on the mechanization of art.  And even more obviously, this must be a show of drawings (as in line on paper). Oversized geometric sculptures and drawings made in New York in the late 1960s must fit into the trajectory of Minimalism, right? What I found upon closer examination, though, is that Rockburne’s nuanced work plays on our expectations to complicate these very categorizations. As the first sentence of the exhibition wall text states, the artist was driven by the question she posed in 1973: “How could drawing be of itself and not about something else?”

Rockburne was asking if it is possible to create a form of drawing that was entirely self-referential. In her earliest iterations of Drawing Which Makes Itself, Rockburne folded paper that had pencil marked on it. In this way, the traditionally passive paper no longer received the drawn line, but rather produced that very line in space. The physical fold in material was the epicenter of action in the work. Interestingly, unlike many of her contemporaries, Rockburne’s interest in self-referential drawing was not meant to eliminate her own hand as an artist. Rather, she explains, “I’m interested in the ways I can experience myself, and my work is really about making myself.” In this way, Rockburne’s work denies the mechanized paradigm of Minimalist art, and rather finds an interesting middle ground investigating process and identity.

Rockburne’s formalist vocabulary is based less in the hegemony of ‘flatness’ or the grid of Minimalism, and more in her training in mathematics. Rockburne studied with mathematician Max Dehn at Black Mountain College in the 1950s. It was here that she was introduced to notions of set theory and topology that went on to transform the way she created art. Rockburne’s art became a visual way to work through the questions she was exploring in math, which were distilled and manifested through folds, creases, and lines. Rockburne was not searching for an essential quality of art, but rather using fundamental structures to ask questions about larger issues of space and dimension.

In one wall piece in the MoMA show entitled Nesting (1972), the viewer is confronted with a black diamond of tracing paper with radiating pencil lines. Through the way the paper is folded off the wall and the crispness of sections of the drawn lines, Rockburne is transforming and activating the space. The wall becomes a surface to draw on and into, as she reminds viewers of the fundamental geometry of the architectural space they inhabit.

An interesting aspect of this work, and many others in the show, is the smudging around certain endpoints of the lines, and the visible fingerprints. At first, these seemed to be accidental—but could the installers at MoMA really have been so careless? Certainly you would never see a thumbprint in the middle of a work by Sol LeWitt. But this is precisely the point: Rocburne’s work is subjective, it is hand-made, it does not deny the self.

The joy of MoMA’s exhibition is becoming immersed in this sort of rich and complex questioning. Rockburne asks viewers to engage their bodies and minds and re-evaluate their relationships to the objects and space around them. Her explorations in drawing celebrated in The Drawing Center’s first exhibition continue to resonate and challenge today.