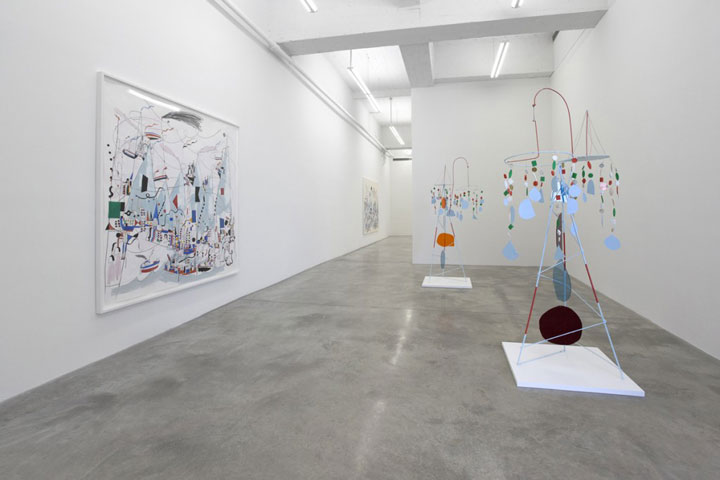 Nathan Carter has channeled the energy of a child’s drawing in his latest body of work, presently on view at Casey Kaplan through October 24. The pictorial works in THE FLY-BY-NIGHT MEGA METRO SUB ROSA TURBULENT TWISTER are a departure for Nathan, who usually works three-dimensionally, merging exuberant craft and DIY aesthetic.

These new works are in between drawings and irreverent paintings, executed on aluminum di-bond panel with Benjamin Moore paint, pencil, crayon, and marker. Each piece looks like a map of a fantasy village with architectural structures like houses, roads, towers, highways, high-rises, and tunnels alongside brushy gestures, lots of flags, and marks associated with water. I met Nathan one afternoon in his exhibition to talk about his process. He gave me a little book, which functioned as a glossary for the exhibition with poetic narratives to accompany each of his landscapes. 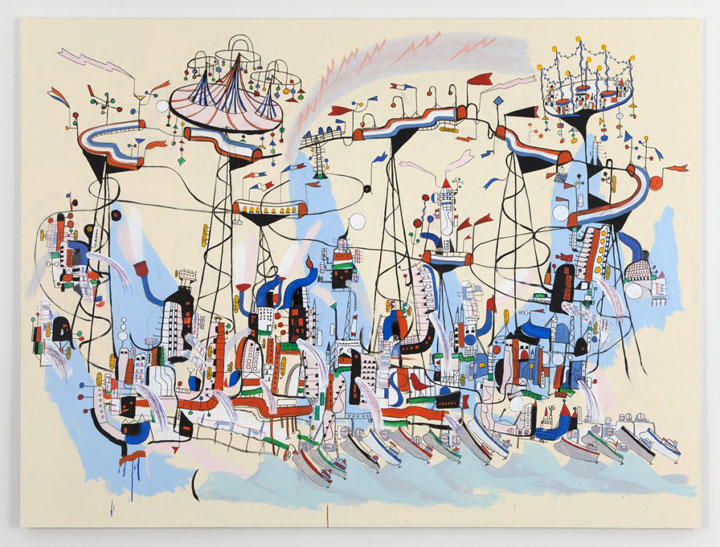 A monstrous flash of pink lightning rip-zipped across the sky projecting wild color on the frozen slopes and vertical ice cliffs. Signal flags sailed, and air horns blew warnings of turbulent wind shear. A pilot flying an AC-670 Warbird 740kph at an altitude of only 120 meters accidentally severed a steel cable, causing a cable car to fall down into the ravine.

The ship-breakers abandoned ship as the lightning reached down from the sky and electrified the thirty-foot-tall rogue waves crashing against the docks.

Thunderstorms caused dangerous levels of static electricity to build up in the high-altitude cable car stations. All of the Texas-based technicians, crane operators, and salvage merchants took cover in the precarious underground two-for-one-titty-twister-tequila-taverns until the storm subsided. 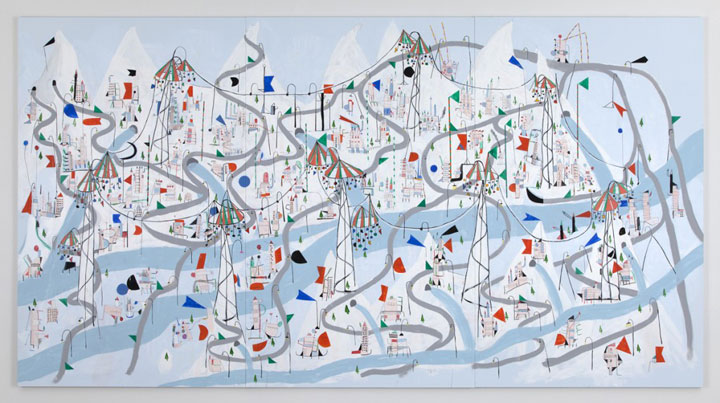 Nathan Carter, As dawn broke after the terrible Blue Northern there was a calm that settled in over the Seven Summits, 2013. Latex acrylic paint, ink, color pigment on aluminum di-bond, 94 x 58 inches. Image courtesy of Casey Kaplan.

Nathan’s son Kazuichi, a drawing enthusiast, has influenced Nathan’s recent engagement with narrative. According to Nathan, Kaz will attach meaning and names to all aspects of his drawings, no matter how abstract; each mark is assigned an attribute, which determines without a doubt the place, time, and nature of the events he has depicted. Nathan has used his son’s approach as both permission and a reaction against his own art education of the late 80s and 90s at Yale. His Sculpture MFA program was all about authenticity and pure form arrived through a relationship of materials, and the integrity by which the material is transformed.

Nathan’s exhibition breaks with the taboos of his schooling by assigning meaning through stories whose political and social dimensions remind me of the genius of Dr. Seuss. (In The Lorax and Yertle the Turtle, the abuse of power and the danger corporate greed poses to nature are camouflaged for children but legible to the adult reader.)

Nathan told me that he is interested in his work being a parody of machismo and power. I think that he accomplishes this dual reading by connecting darker narratives to his buoyant imagery. My only regret is that the narrative was not made more transparent in his show; there was no wall text nor copies of the little book he showed me to illuminate the complicated dimensions in Nathan’s work for viewers. 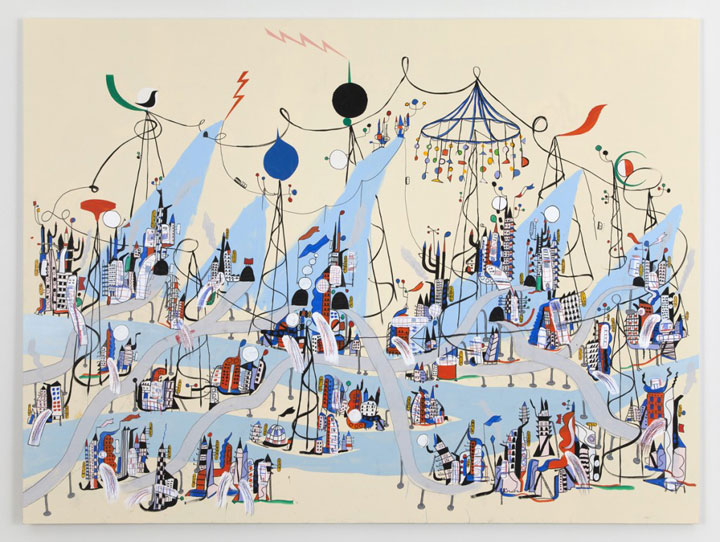 Nathan Carter, Petropavlovsk-Kamchatsky is located on the Bering Sea at the base of Avachinsky Volcano, 2013. Latex acrylic paint, ink, and color pigment on aluminum di-bond, 71 3/4 x 96 1/4 inches. Image courtesy of Casey Kaplan.

We are excited to have Nathan’s input as a Fellow for the first Open Sessions, a new platform for artists at The Drawing Center. He is one of four Open Sessions Fellows, along with Emilie Clark, EV Day, and Kamrooz Aram. The Fellows will help choose the participants for the new program from an application pool and organize workshops and other events for them.

Nathan’s initial ideas for events are playful; he suggested combining a social gathering for artists with informal drawing activities. The materials—China markers and felt tip markers for drawing on cocktail napkins, paper hats, and other scraps of paper— would be provided, though the act of making wouldn’t be mandatory or even suggested. He thinks of it as a social experiment.

Nathan explained to me in an email:

“I’ve always been interested in the kinds of drawings that people make in the moment, for use—to describe, direct, guide, navigate, invite, insult, express, signal, warn, etc. These take the form of passed notes between friends, drawings on cocktail napkins at a bar, drawings on paper hats, maps or directions, and my personal favorite: drawings on small pieces of paper which are then taped to someone’s back without their knowing.”

Nathan is interested in natural, spontaneous work; for him, drawings don’t have to be precious (but could be), and can be made outside of a studio environment. His suggested name for the event he described is DRINKING AND DRAWING.