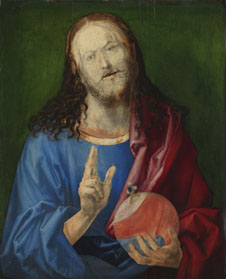 Any survey of Central European work of the Northern Renaissance must contend with the dominating artistic personality of Albrecht Dürer. The Metropolitan Museum of Art’s current exhibition Dürer and Beyond: Central European Drawings in the Metropolitan Museum of Art, 1400 – 1700 sets out to place him in the context of a diverse and vital tradition of drawing without allowing him to overshadow his contemporaries and those who came after.

Curators Stijn Alsteens and Freyda Spira have laid out more than 100 works in what is essentially a survey of the Met’s collection of Central European Old Master drawings, many of which have been acquired in the last two decades. The show opens with two delightful anonymous Bohemian drawings, both of them very early and very rare. Martin Schongauer, an early influence on Dürer, is represented by a very important character study. Dürer himself is represented by 5 works on paper (including the iconic pen and ink self-portrait) and the unfinished painting Salvator Mundi. The inclusion of this piece provides the visitor with the opportunity to see Dürer’s extensive and complex underdrawing. Indeed, many of the drawings in the exhibition were executed as studies for works to be realized in other media – painting, metalwork, stained glass. But the meticulous care that many of the artists took and the multiple iterations in chalk, ink, and wash that the drawings passed through indicate an approach to each drawing as a work independent of its ultimate realization in another medium. 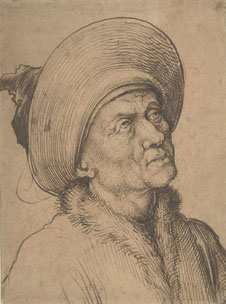 Martin Schongauer, Man in a Hat Gazing Upward, Before 1480. Pen and dark brown ink, with traces of a preliminary drawing in a darker ink, on pinkish prepared paper (with red ocher?), 5 1/8 x 3 13/16 inches. The Metropolitan Museum of Art, Robert Lehman Collection, 1975.

Artists outside of Nuremberg, where Dürer worked and where his influence was most keenly felt, are well-represented in the exhibition. However, after Dürer, no dominating artistic personality emerged in Central Europe, and the latter half of the exhibition feels somewhat diffuse, lacking the focus that Dürer provides in the first gallery. Still, there are many charming and idiosyncratic drawings on view that give testimony to the breadth and variety of drawing in Central Europe between 1400 and 1700. Works by Hans Baldung and Peter Flotner exhibit a sophisticated and playful sexuality; works by Hans Hoffman show a burgeoning interest in closely-observed renderings of the natural world, taken up later by Jacob Marrel and Johann Jakob Walther; and a startling work by the Monagrammist AW shows an exploration of perspective and foreshortening reminiscent of, if not nearly as well-executed as, those of Mantegna. One of the more uncommon inclusions is a drawing for a “thesis print” by Jonas Umbach. Thesis prints were commissioned on the occasion of a dissertation defense, and integrated the text of the candidate’s thesis, often along with a dedication to a powerful patron or potential patron, into a composition of overwrought iconography.

Although few of the artists are household names, aside from Dürer, the sophistication and artistry of Central European drawing during the Northern Renaissance makes this exhibition very much worth a visit. –Champ Knecht, Director of Finance and Administration