Currently on view at the New Museum of Contemporary Art, Anna Boghiguian: The Loom of History is the artist’s first solo exhibition in the United States. Though based in Cairo, Anna Boghiguian’s New Museum show reflects her interest in multi-culturalism, as did her recent exhibitions in Milan, São Paolo, Venice, and Kassel. Yet the The Loom of History also considers how Western political hegemony has shaped global history. The artist creates drawings, paintings, and sculptures that activate her own creative agency to fearlessly address how imperialism has been interwoven into history.

Boghiguian builds an informal dialogue with the viewer by creatively breaking the stigma that art can be unattainable and intimidating. Located on the ground floor of the museum, the walls of the space are painted black and yellow in two horizontal stripes surrounding the artwork. The black section of the walls resembles a chalkboard, while the yellow chalk-like writing demands the attention of the viewer. These writings inform the audience of historical truths—such as histories of slavery and colonialism—that are oftentimes overlooked because of their violent nature. Throughout the exhibition the artist initiates a rhetorical conversation about acknowledging the past, analyzing the present, and creating a future that benefits all mankind. 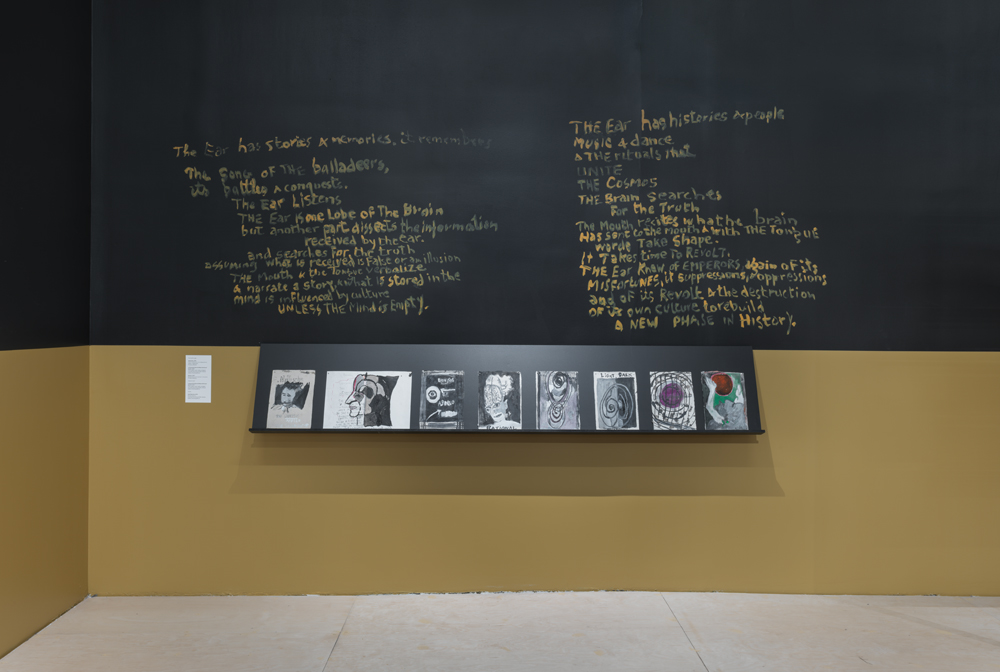 Boghiguian uses bodily imagery in her work to explain how the body retains memory that can provoke action against oppression. In the writing on the wall, she explains why ears play a significant role in the way memories are stored. “The ear has histories, people and dance, the rituals that unite the cosmos,” she writes. Here, Boghiguian reminds her viewers of the value of oral history and traditions that connect all people of every culture. She explains how interaction between the ear, brain, and mouth function to create a direct connection with history. Paintings of the brain can be seen throughout the gallery; these paintings include a cacophony of pink and red cerebral aqueducts (tubes within the brain) along with text. Boghiguan writes, “The brain searches for the Truth. The mouth and the tongue verbalize and narrate a story, what is stored in the mind is influenced by culture unless the mind is empty.” These paintings suggest how spoken words are transformed into memories. 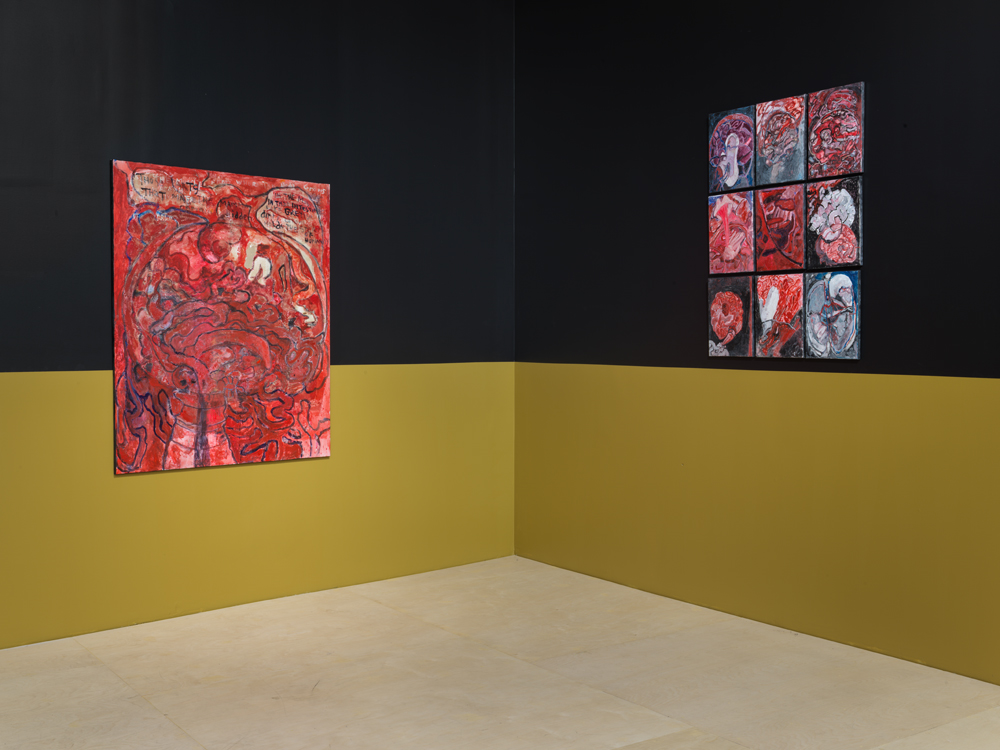 As you make your way to the center of the gallery, you will encounter autonomous, cut-out figures that represent acts of protest. These figures serve as a reminder of the power of civil action. The artist activates the viewer’s body by confronting them with these effigies, evoking a visceral response from the audience. Although the flatness of the cut-out figures could potentially be a reference to ancient hieroglyphics, the images contained in the paper figures and wooden stands are direct references to signs used during marches. The collective scene that they create illustrates the tumultuous relationship between human rights and abuses of power. This work serves as a visual call to action while empowering citizens to play a role in shaping history.

Boghiguian‘s drawings also demonstrate visual depictions of oppressive moments in American history. Multiple drawings in the space are displayed on a metal shelf that suggests a visual timeline. These drawings serve as a reminder of how monetary greed and colonialism has been an integral part of the foundation of the United States. Boghiguian’s drawings visually describe the exploitation endured during slavery that most would tend to ignore. The artist exemplifies the fact that the legacy of slavery continues to have a lasting effect on American society today. Her work is a reminder of the significant connection between systematic forms of oppression in the United States and the socio-political context in which African Americans live. She causes her viewers to confront the country’s tumultuous past and acknowledge the cultural and political repercussions of the Transatlantic Slave Trade. 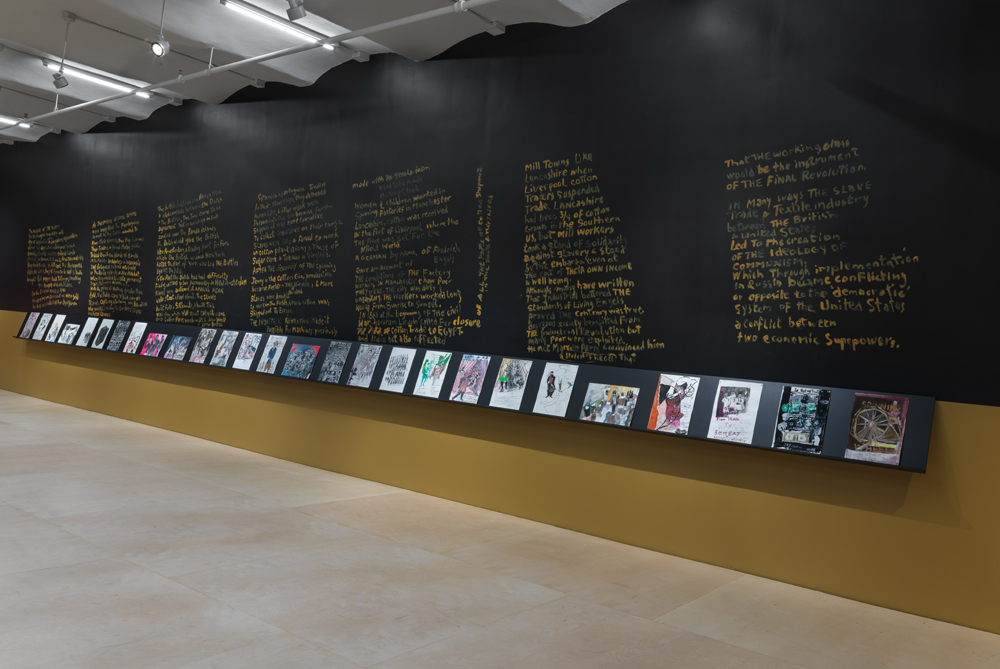 Boghiguian utilizes her love of humanity to bring awareness to the inequity embedded in the fabric of our world. By presenting such work in the most prominent cultural capitol in the United States, Boghiguian reminds the viewer to be conscious of their own civil liberties. The exhibition, as a whole, serves as an informational overview of historical injustices while reminding the public of the social responsibility bestowed upon each of us as a member of the human race.

‘Anna Boghiguian: The Loom of History’ is curated by Natalie Bell, Associate Curator. The exhibition is on view through August 19, 2018.