The ever present challenge of mediating an abstract concept hangs over Delirium: The Art of the Symbolist Book at The Morgan Library & Museum. The small exhibition makes particular note of how artists in the 1880s and 1890s interpreted and captured the ambiguous nature of symbolist text, engaging in the ongoing conversation between poets and artists seeking to break from the confines of verisimilitude and naturalism, and proposing a medium through which disparate disciplines defined as symbolist can be united.

The decision on the part of the curator to address both literature and art through books circumvents the problem of defining symbolist art on its own, and in fact is useful for acknowledging the deep similarities between the two mediums in both technique and motivation. It also references the tendency among symbolists to reject easy categorization, instead favoring symbols that defy simple definition. The exhibition places the way symbolist thought was mediated at the time, via literature and art independently, in this context of dissolved categorization by examining the collaboration between the two fields.

Poems by writers like Stéphane Mallarmé and Emile Verhaeren are included in materials at the door to the exhibition. Walking through, the text allows visitors to read samples of the content of some of the books on display. The inclusion of the text, rather than the illustration divorced of context, reaffirms that the value is in the association. The exhibition is concerned with the book as a whole.

The exhibition also makes reference to a deeper ideological relationship best described by Charles Baudelaire, whose poem is presented as a preface to the visuals in the exhibition. Baudelaire suggests that the ultimate reflection on art is a poem, rather than a review or an analysis. Insofar as it is possible, the exhibition makes clear its desire to delve into the inner emotions and motivations of the artists, partially via symbolist representation, much in the same way the artists and poets of the symbolist movement gave shape to internal thoughts and feelings. It does not always do so neatly, but certainly gives attention to the most varied symbolist impulses.

The works themselves are misty and fanciful. Many of them are prints that take the benefits of aquatint, fine etching, and lithography to their most delicate extremes. Each image phases from glowing and linear to subtly shaded and layered. In particular, the exhibition returns over and over again to the work of Odilon Redon. One of the quintessential symbolist artists, Redon’s subtle lithographs and painted works evolved from turbulent, dark and monochromatic images to light, colorful misty forms over the course of his practice. His evolution is best represented in this exhibition by a drawing, entitled Centaur Lisant and by Beatrice. That these two images represent favored symbols in the movement, Greek mythology and women, is no coincidence. 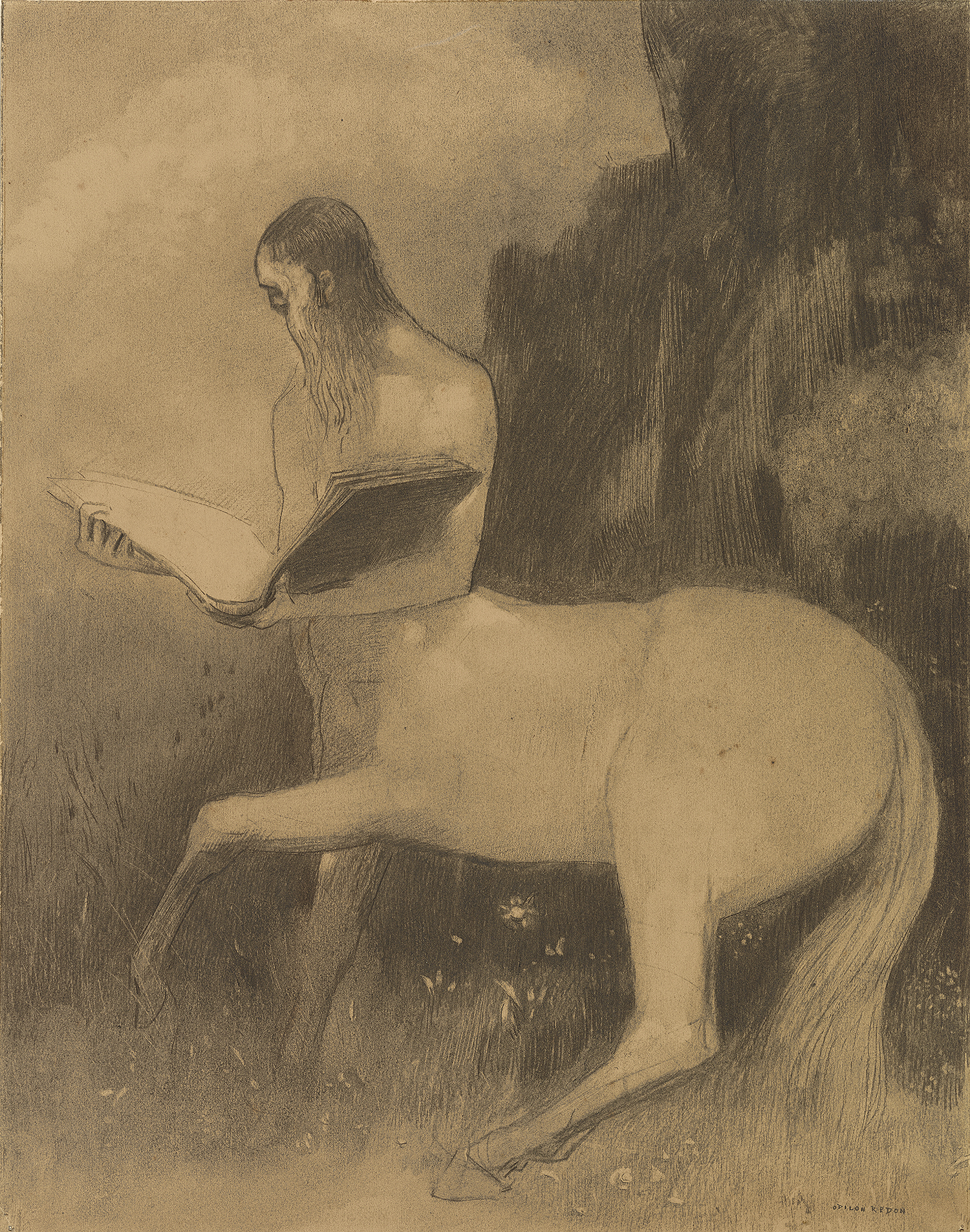 Redon’s Centaur Lisant, emerging as hazy highlights and quick, sketch-like lines from an atmospheric backdrop, himself stares down into a book, the pages, like his body, are given the benefit of a subtle glow. The mythical subject, contemplative pose, and moody charcoal give an impression of nostalgic sorrow, piggybacking on the symbol of a figure who is neither human nor animal, an intellectual in between worlds. Beatrice, on the other hand, is a verdant print showing a figure in downcast profile in subtle yellows, greens, and blues. Though the palette is lively, the figure is fading, unattainable, and indistinct. Like a ghostly shadow on a spiritualist photograph, Beatrice is a challenge to see. Both eschew distinct facial features in favor of emotive color and light. Whether sinister and stern or bright and ethereal, Redon’s subtle, indistinct work epitomizes the stylistic tactics and symbols that became a hallmark of much symbolist art. 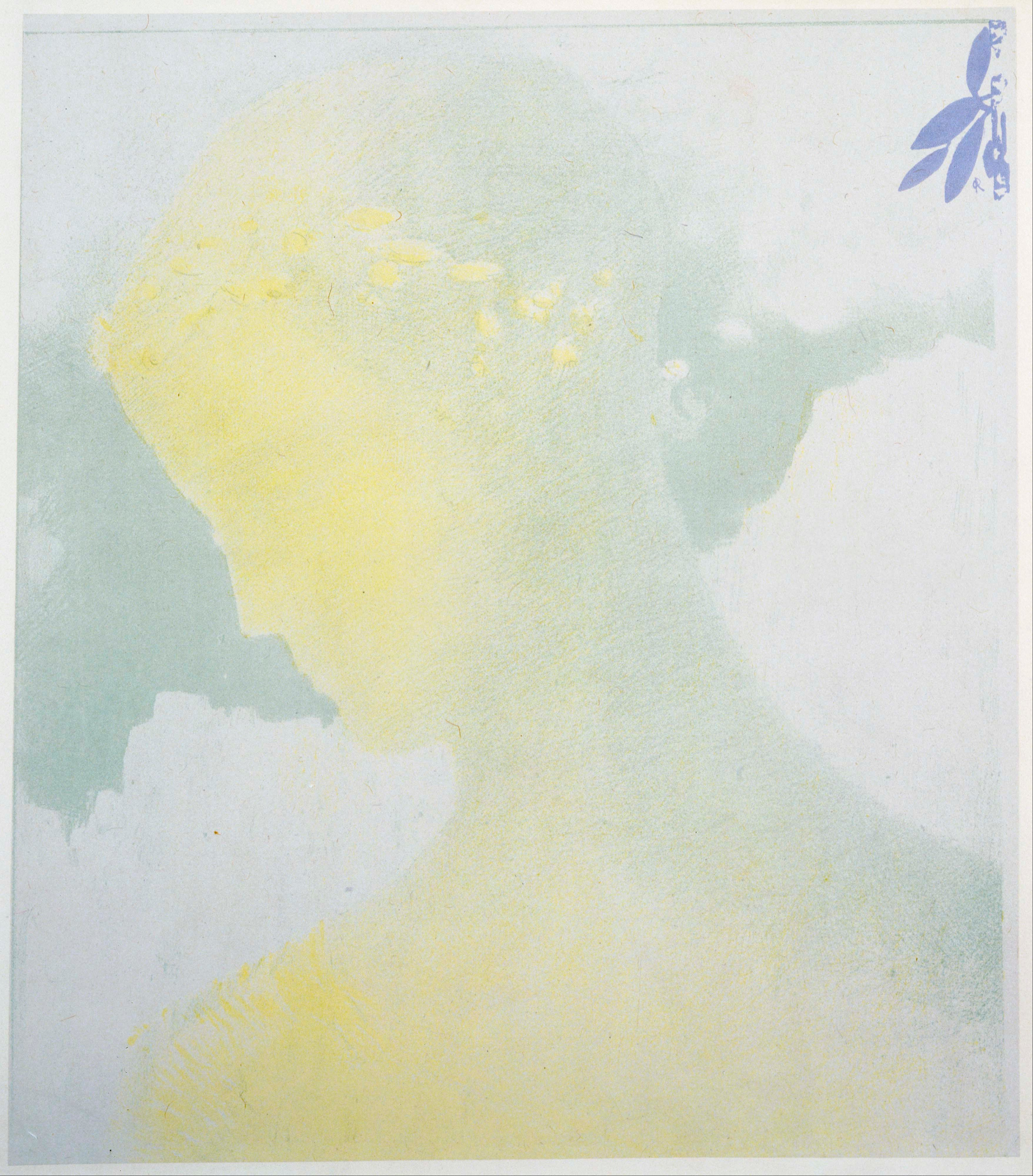 One of the poems provided in the exhibition, Paul Verlaine’s “I want, to kill you” embodies the same classical and Romantic outlets as Redon’s work. Verlaine laments the passing of time, and with it innocence, sullenly wishing away his shame in favor of “kissing young things while preserving their honour” under the moonlight. This luminous image of bashful “young things” recalls the indistinct but breathtaking Beatrice, who is unattainable to the viewer’s eye just as the innocent times are unattainable to Verlaine. Placing himself in the role of Tiberius, Verlaine folds mythological and classical symbols into the piece as well. The same symbols as Redon’s, set against their antithesis, the modern poet and an unchaste, lustful time of the present, reinforce the play of categorization in symbolist poetry and art and remind the reader of some favored symbols: femme fatales versus innocent virgins or classical figures versus the inner thoughts of the modern person.

The portraits of writers who engaged in themes identified as symbolist hallmarks—inner representation and otherworldly desire, fear, and torment—are highlighted to an almost contradictory degree in the exhibition. However, the intent is for the stylized exterior of the writer to represent their inner thoughts and feelings, perhaps better than a faithful illustration ever could. Glowing and serene, with his hair and clothing floating around his contemplative face in soft curls of pigment, Arthur Rimbaud, in Portrait of Arthur Rimbaud by Henri Fantin-Latour, embodies symbolist tactics for representing dreamy aspects of spiritualism. The author himself takes on a more universally understandable role when translated through accepted symbols of the kind that might be used to depict a spirit. In her analysis of symbolist autobiography, Rosemary Lloyd suggests that artists and writers both adopted “a series of constantly changing and profoundly complex images, each of which hints at a personal fact, but each of which also expands… to indicate the multiplicity of the ideal.” Rimbaud’s portrait, along with the undulating lines of Félix Vallotton’s portrait of Paul Verlaine, incorporates the visual imagery into the concept of the writer, both universalizing and illustrating the inner mind of the artist while uniting visual and literary concepts through the author.

The symbolist movement clung to a fascination with altered mental states and the otherworldly. Taking cues from the advent of psychology and the popularity of spiritualism, symbolist artists and writers created work that existed in dream states and myth. Symbolist interiors, like symbolist artwork, were largely meant to capture the affect or emotion of a scene. Aside from the use of glass and manipulation of light to produce desired emotional effects, color and opacity also played a role in mimicking the interior mind and feeling.

The walls in the Delirium exhibition are painted burnt pink. This jarring choice seems at odds with the subtle illustrations on display. However, the paint points to the aesthetically conscious and even decadent lives of the poets and artists in the same warm colors Joris-Karl Huysmans mentions in his symbolist writing Against Nature. He notes, “As for those gaunt, febrile creatures of feeble constitution and nervous disposition whose sensual appetite craves dishes that are smoked and seasoned, their eyes almost always prefer that most morbid and irritating of colors, with its acid glow and unnatural splendor—orange.” The decision to shadow wall text in neon pink and contextualize the work with the confrontational coral color parallels the room with symbolist book covers, externalizing the uniting internal character of the artists and writers. The room even has its own border. The scrawling detail suggests the same shifting, flattened quality seen in Les Viles Tentaculares by Théo van Rysselberghe, a book cover in the exhibition which uses sinister, stylized plumes of smoke to form the letters of its title.

More heavily graphic than the interior illustrations, the book covers in the exhibition balance the practicality and reproducibility of a limited palette with amorphous and dreamy subjects. At the end of the exhibition the book covers reinforce the stylistic decisions, scrawling text and assertive color, chosen for the room as a whole. They are the first impression, via the whimsical typeface or tense ethereal figure, by which the inner text and illustrations will be judged. By choosing to focus on symbolist books, the exhibition trains visitors to focus on how artists and writers interact, and even set up expectations about the others’ work. This is especially effective in symbolist work, where the series of recognized symbols must be reproduced and reinterpreted in order for meaning to be understandable, especially to those of us viewing the material more than 100 years after it was made.