From the colorfully rendered drawings of everyday life to the portrayals of mythological creatures and gods like Krishna and Vishnu, the artistic elegance of Indian art showcase the varied and rich cultural exchange within India and the surrounding regions. Epic Tales from India: Paintings from the San Diego Museum of Art, on view at the Princeton University Art Museum until February 5, 2017, presents modern Indian paintings from the sixteenth century to the nineteenth century with illustrations that depict images from classical literatures, including Gita Govinda, Shahnama or “Book of Kings, and texts on musical theory, which are illustrated by Ragamala paintings. The works are organized in a contextual manner to better understand the story and tales from the original basis stemming from stories of battles, mortal lovers, and deities popular in Indian culture. Although these tales portray similar characters and stories, there are pronounced differences that indicate the various regions of India. The works demonstrate the influences and contributions to Indian art from each region through the usage of materials, varied visual expressions, and composition of the work. The exhibition beautifully illustrates a connection in the rich traditions of Indian culture through literature, visual art, and music. 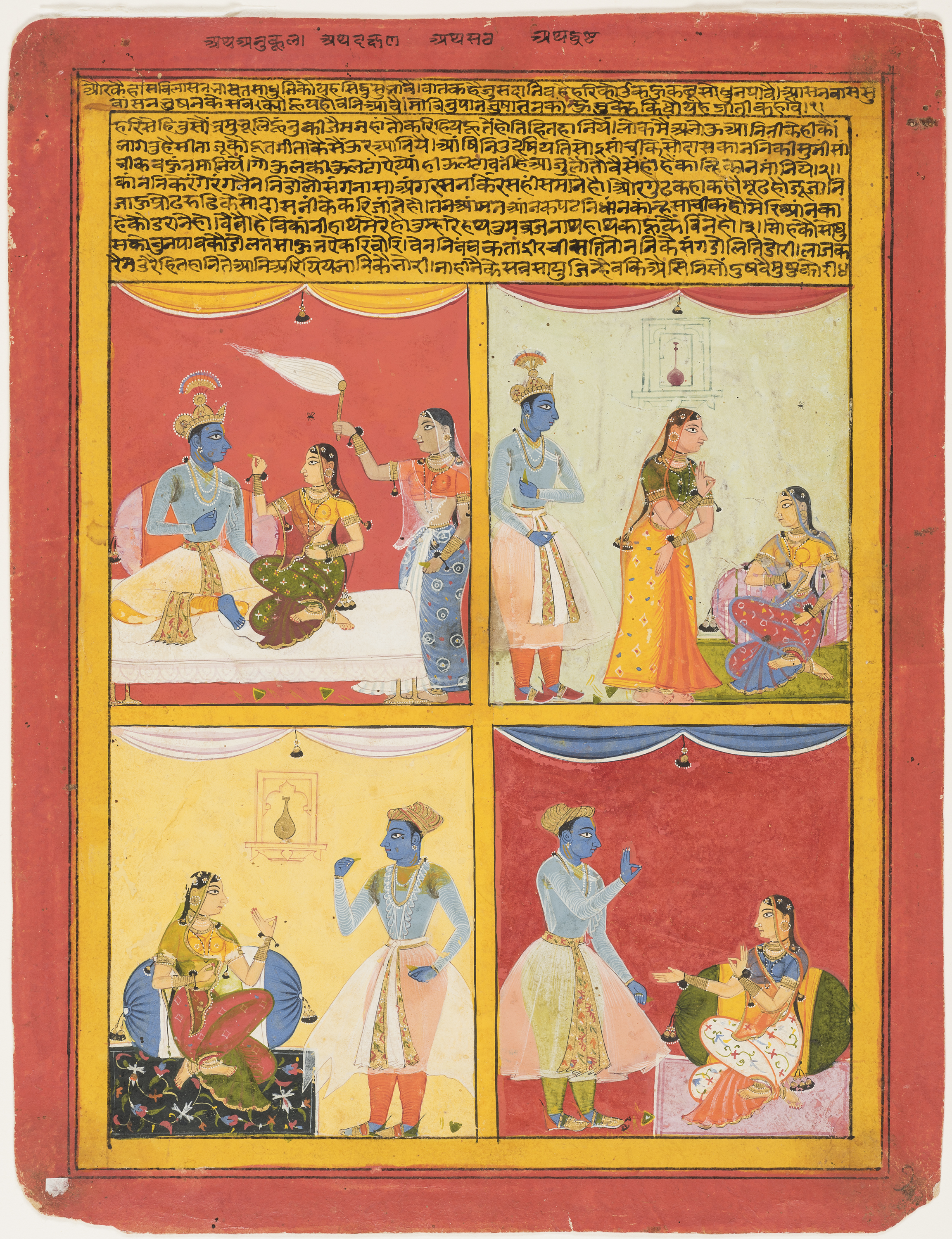 Differences in Indian painting styles are attributed to resources available by regions and the application of the materials. In Mughal painting (created for the Mughal emperors and their courts), there is a preference for pastels and the figures are depicted with a certain fullness, proportional to surrounding elements within a receding landscape. In Rajasthani painting (originating largely within what is now the modern state of Rajasthan) there is a preference for vivid greens, reds, and blues; the figures are depicted in profile view and scaled to match the for surrounding botanical and architectural elements.

In Pahari painting (created for rulers in the Punjab and Himalayan foothills), there is a preference for cool colors, by contrast to Rajasthani painting. An example of a Pahari painting is A seer before a group of warriors from the Garhwal court (by an unknown artist), ca. 1785. To create this work, the artist first drew the image, and then transferred it to a new sheet of paper. Transferring the image allowed the artist to reuse the composition again and again. To achieve this, the artist first traced the drawn outlines by pricking holes in the paper, and then turned the image face down on a new sheet and applied charcoal to the back.

Artists implement tools such as composition, perspective, or usage of light to render visual expressions unique to the workshops or region. In northern India, paintings are generally oriented in the horizontal direction seen in Folio from a Gita Govinda (The Song of the Herdsman), Kangra, ca. 1785. The Gita Govinda, composed in Sanskrit by twelfth-century poet Jayadeva, follows the story of Krishna who falls in love with a milkmaid, Radha. In the ca. 1785 Kangra folio, both size and play of light and shadow indicate each figure’s importance. 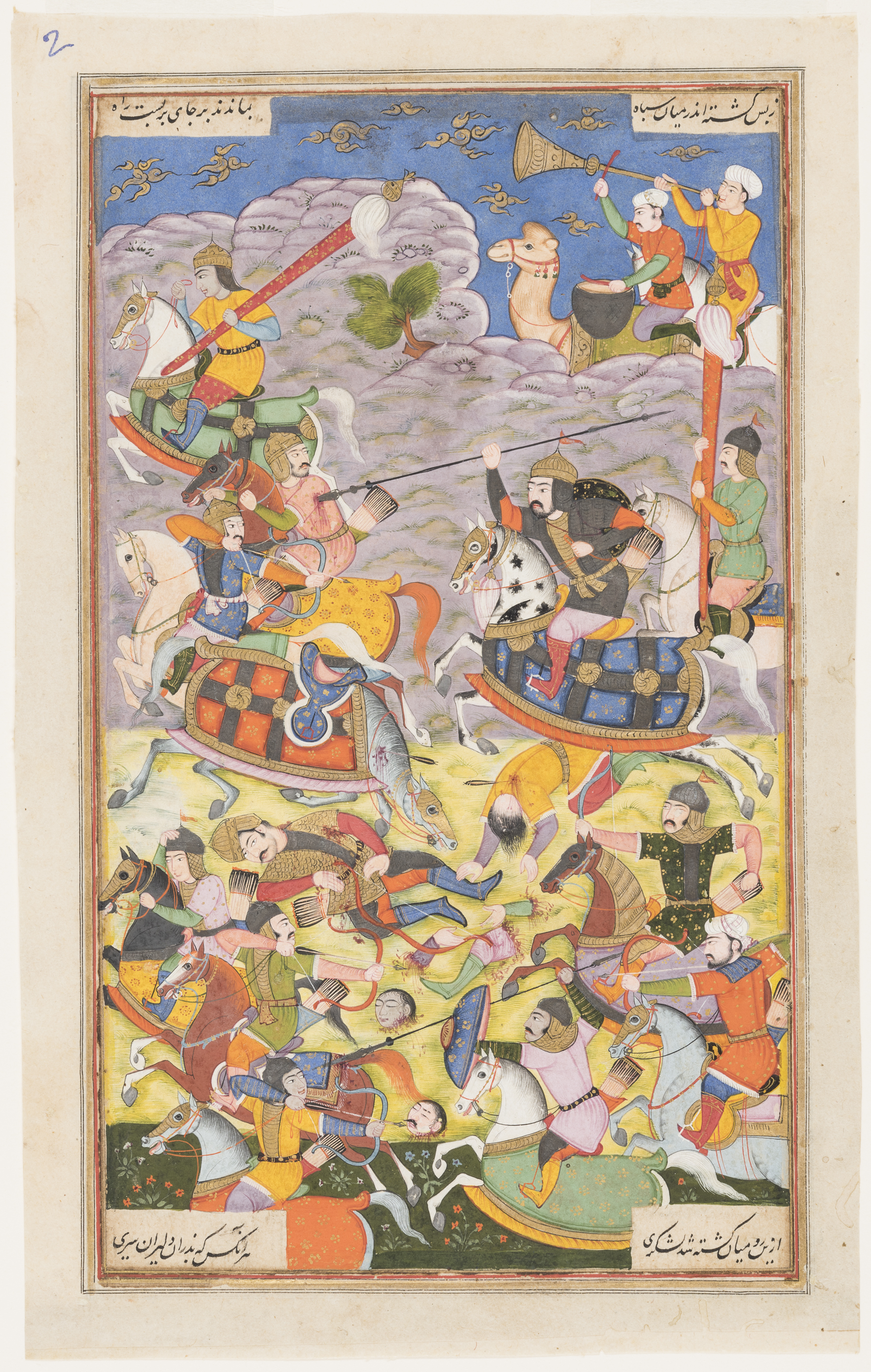 In addition to presenting paintings based on texts written in Sanskrit, Epic Tales includes several examples of Persian texts that were frequently copied and illustrated. Until the early-nineteenth century, Persian was widely spoken in India, brought to India by scholars from eastern Islamic kingdoms as well as by the Ghaznavid sultans who were patrons of Persian-speaking poets. Indian writers began composing original works of literature in Persian from the twelfth century onward, and classic Persian texts, such as Shahnama or “Book of Kings,” were among the most popular works of literature. Illustrations of the Shahnama combine history and myth. In Khusrau II Parviz and Bahrām Chōbin: The second battle, folio from Shahnama (Book of Kings), 1608, includes the scene of a battleground with the armies of Khusrau II and Bahrām Chōbin engaged in conflict in the foreground and soldiers playing musical instruments in the background. Depicting the actual battle between the Sasanian king, Khusrau II (c. 570–628), and his usurper, Bahrām Chōbin (unknown–591), a subsequent scene from the tale describes Khusrau II’s rescue by an angel and subsequent victory.

Music and its representation in Ancient Indian texts also forms a significant part of Epic Tales, and several Ragamala paintings, series of illustrations that represent ragas (melodic modes), are featured prominently in the exhibition. The six major ragas are connected to the six seasons (spring, summer, monsoon, autumn, early winter, and winter), times of day, and activities, and Ragamala paintings provide guidance as to when and how each raga should be performed. The Amber folio on view, 1680, represents the Sri Raga, the sixth raga family, which is associated with the melancholic mood of winter. The Sri Raga traditionally traces the separation of a pair of lovers, one of which is sometimes depicted as the god Krishna. In the Amber folio, in which the male lover is the patron Raja Ram Singh of Amber, the female lover discovers her partner’s infidelity, after which she retreats to the woods to live as an ascetic.

Epic Tales from India: Paintings from the San Diego Museum of Art at the Princeton University Art Museum familiarizes the viewers with Indian art with the introduction of epic narratives and literary categories: Gita Govinda, Shahnama, and texts on musical theory. Influences of various regions become more evident through comparison and analysis of the works in the collection.