In the mid-twentieth-century, when artists were heavily weighted down by pressure to reconcile the physical and conceptual aspects of their work, and when notions of the indexical mark, gesture, and authorship were under increasing scrutiny, drawing provided a relevant and poignant platform for addressing the issues of the time. Drawing Then, on view at Dominique Lévy, presents a rare opportunity to re-experience an important decade in art history through the lens of drawing. The show, curated by Kate Ganz, is a regeneration of the 1976 exhibition at MoMA organized by Bernice Rose, entitled Drawing Now, and includes many of the most influential artists from the 1960s, with several additions who were not included in the 1976 exhibition. The show is organized in two parts with one section downstairs that presents a variety of artists who utilize the language of drawing to distinct effects and a second room upstairs that features a more cohesive group of works by artists who are associated with the minimalist and post-minimalist movements. 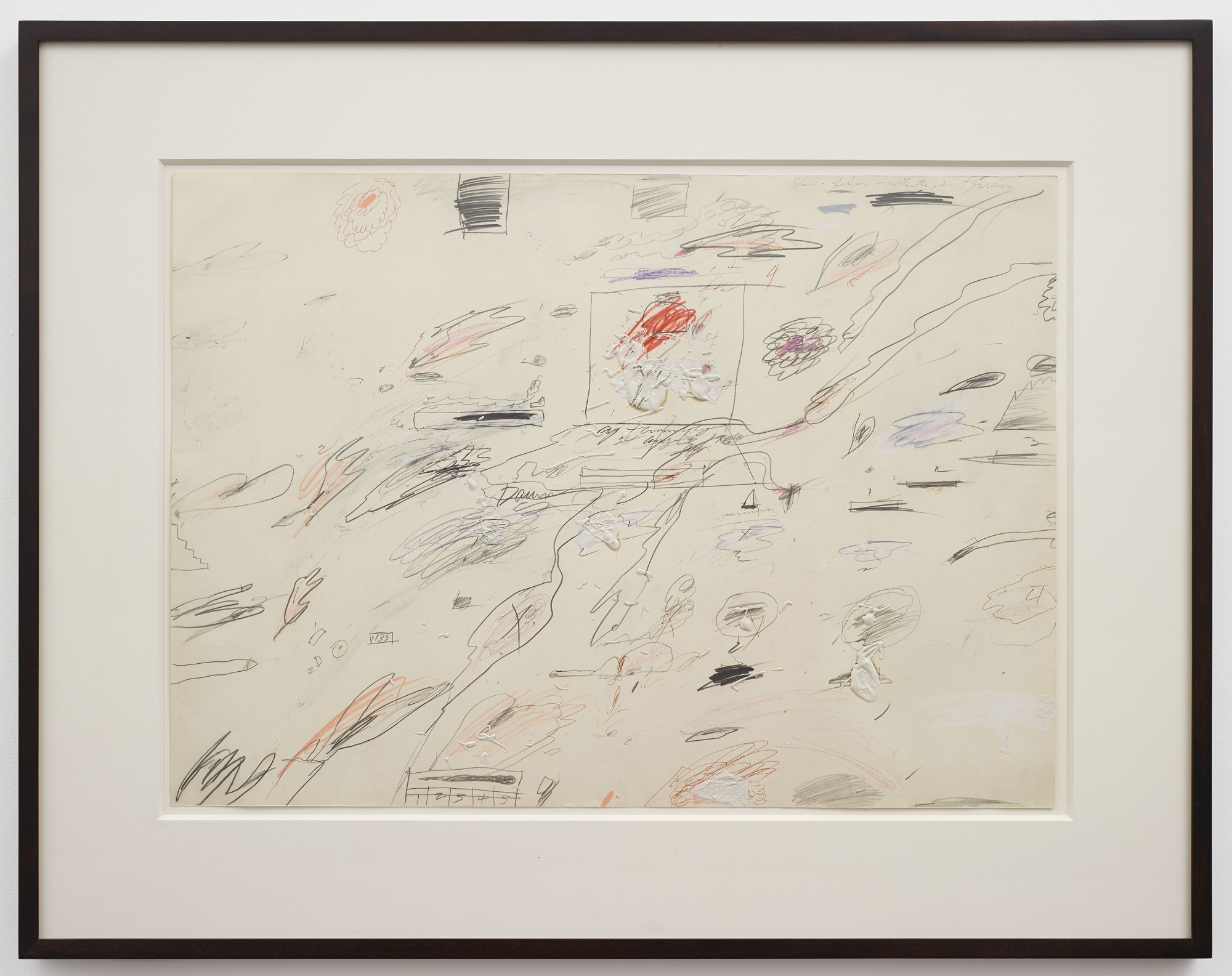 The downstairs portion of the exhibition includes forty different artists, including Jasper Johns, Barnett Newman, Cy Twombly, Roy Lichtenstein, Wayne Thiebaud, Adrian Piper, Robert Smithson, and Bruce Nauman, to name just a few. A show with such a diverse range of  artists could easily be overwhelming, but I was struck by how the nature of drawing and the palettes and scales of each work act as an organizing principle for the exhibition, creating a welcoming environment in which to absorb the works. In many cases, the focus on drawing offers a different means of experiencing these artists’ works, highlighting elements of process that would otherwise go unnoticed. 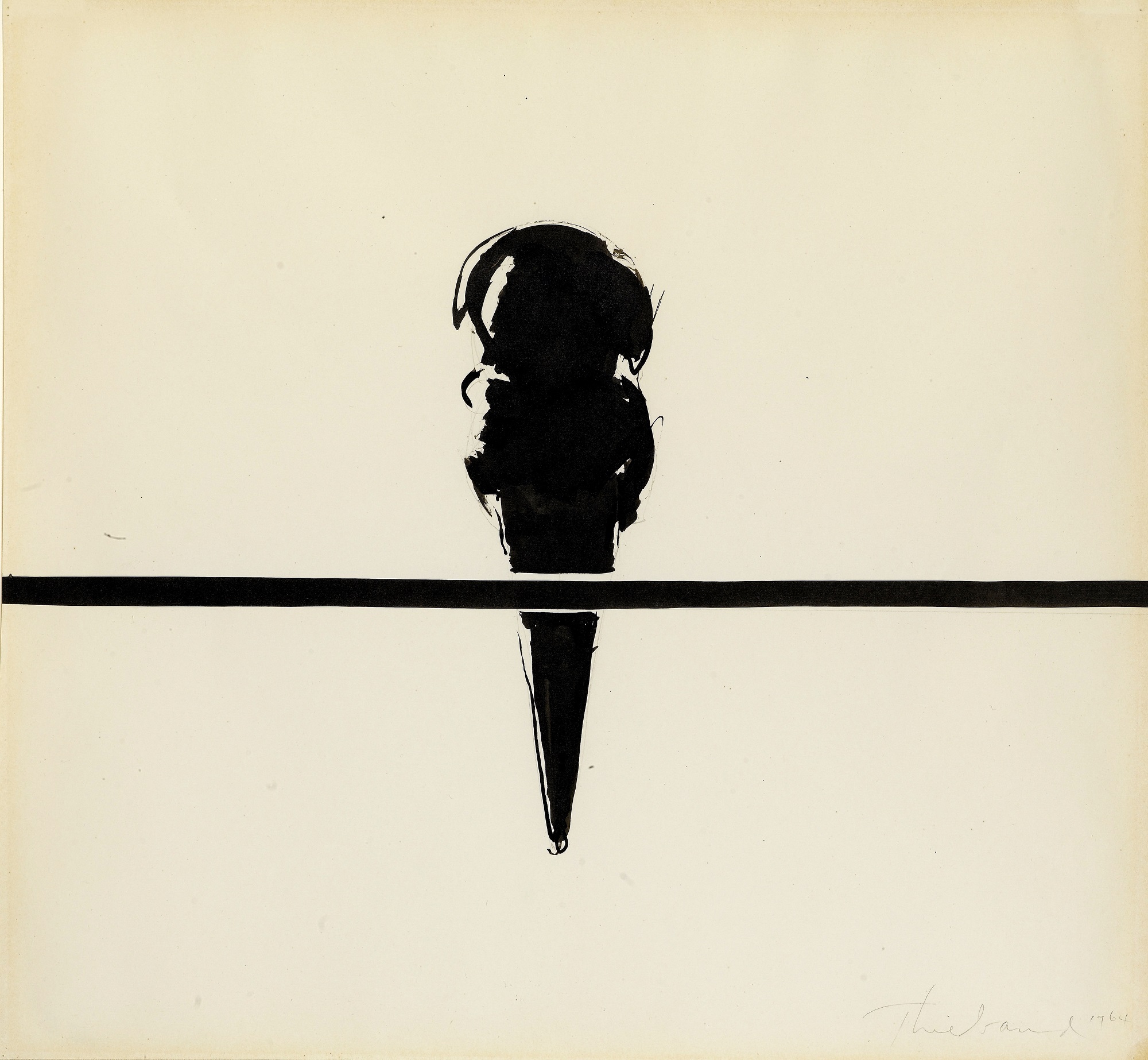 The first thing that struck me when looking at Jasper Johns’ Wilderness II, 1963–1970, was how the artist’s choice to limit his material to charcoal allows for  an increased awareness of the artist’s hand. Johns’ process is clearly felt in his strong, confident marks, an attribute he is known for, and which is even more pronounced in his drawings. In looking at Wayne Thiebaud’s drawing Ice Cream Cone, 1964, one notices that on the surface the image appears very tightly rendered, however,  similar to the artist’s paintings, under closer inspection his use of a more loose and gestural technique becomes apparent, indicating his masterful use of the ink medium.

A piece by Bruce Nauman, Glass templates of the left half of my body separated by cans of grease, 1966, stands out in the context of the exhibition. The drawing gives form to ideas familiar from Nauman’s other works, such as serial repetition and the mechanical nature of the body. In this drawing, we see a series of regimented geometric forms that are drawn along a linear vertical axis; each shape is rendered with precision and calls attention to the fluidity and idiosyncrasies inherent in the watercolor medium. I couldn’t help but think of Nauman’s Walking in a Exaggerated Manner Around the Perimeter of a Square, 1967-68,  a performance work in which the viewer notices the nuances of Nauman’s body as the artist executes the self-imposed repetitive task of walking around the edges of a geometric shape. 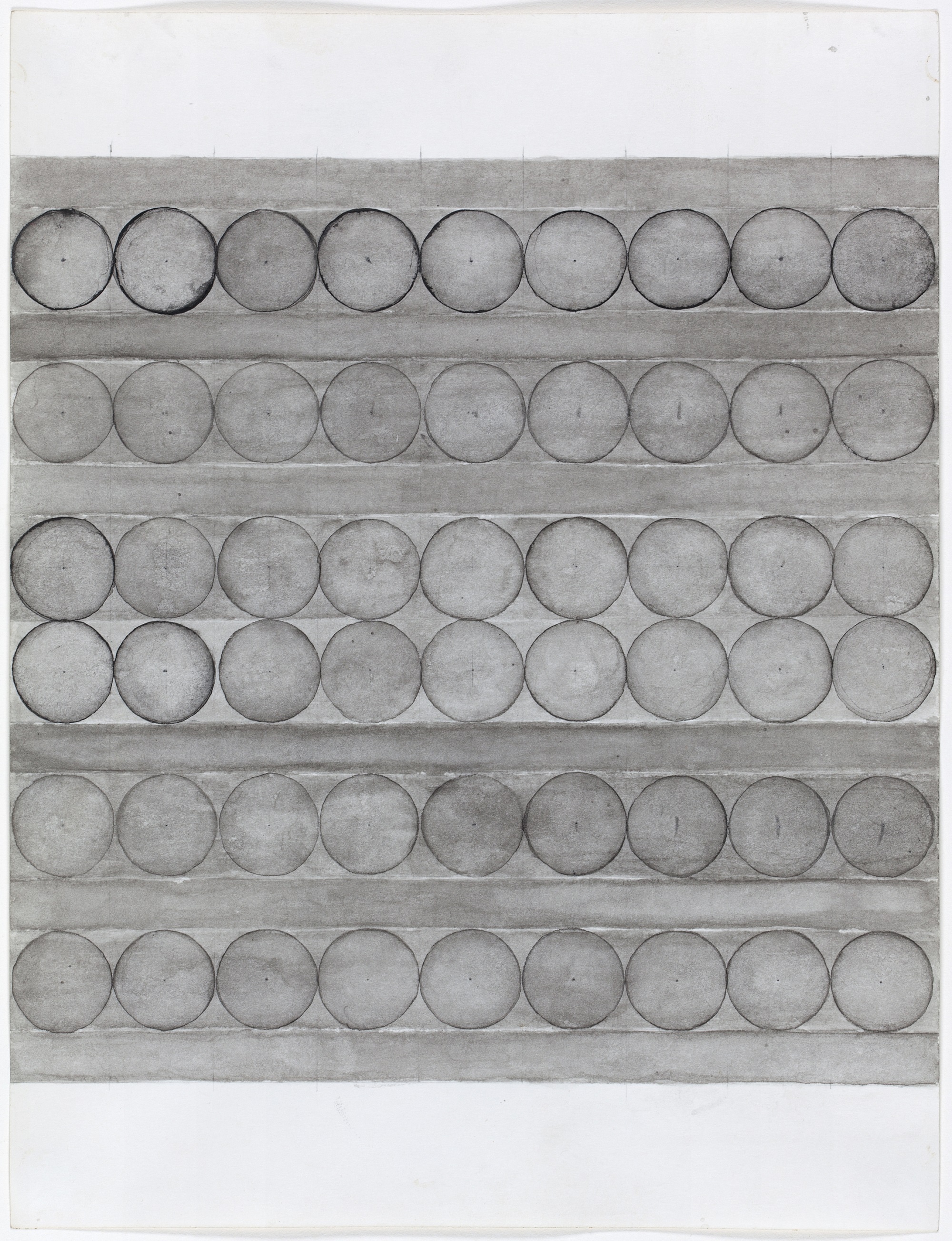 The works in the upstairs room breed a noticeably different atmosphere, embodying a different kind of physicality that deflects energy outward and into the palpable space of the gallery. Sol LeWitt’s Wall Drawing #20, 1969, which is drawn straight onto the wall in delicate pencil, creates a gridded matrix that seems to extend infinitely beyond the space it occupies. This impenetrable space creates a sense of unease, and coupled with the subtle movement and gradation of light in the gallery, the act of looking on LeWitt’s drawing sets a tone for experiencing other works in the exhibition.

On view until March 26th, Drawing Then offers a moment to reflect upon an influential period in art history through the diverse medium of drawing.