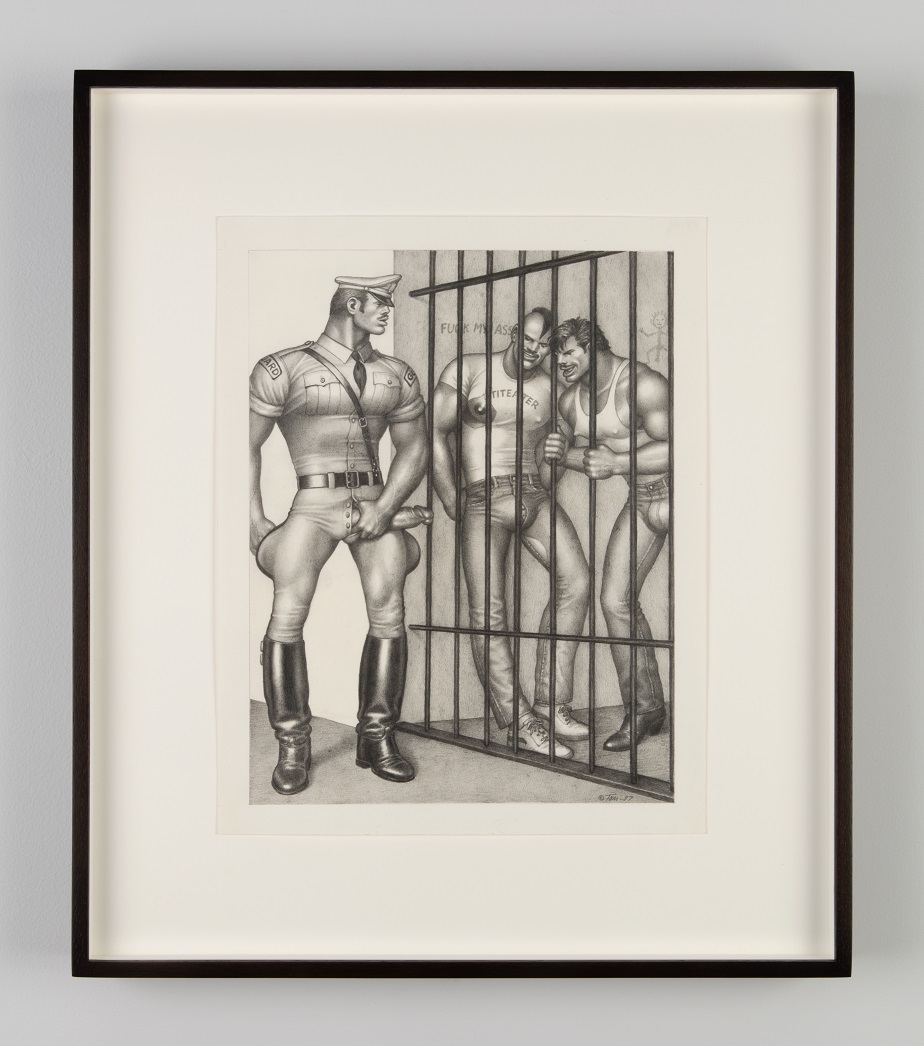 One of the major currents in Contemporary art in the 20th Century was the use of tropes and techniques of commercial art in the service of a non-commercial artistic project. Tom of Finland: The Pleasure of Play, at Artists Space through September 13, suggests that the preeminent homoerotic artist of the last century, although less obvious than Warhol or Lichtenstein, was part of this current.

The exhibition is mounted in two parts: Artists Space’s Greene Street exhibition space presents over 180 drawings, gouaches, storyboards and paper dolls, while its 55 Walker Street Books & Talks space exhibits collages and cutouts from both mainstream publications and early gay magazines. Tom of Finland referred to these collages as his “reference pages” and used them as studies for his drawings. The exhibition text states that the collages are a key to understanding Tom’s work, and anyone with even a passing knowledge of that work should see them to get a sense of its development. 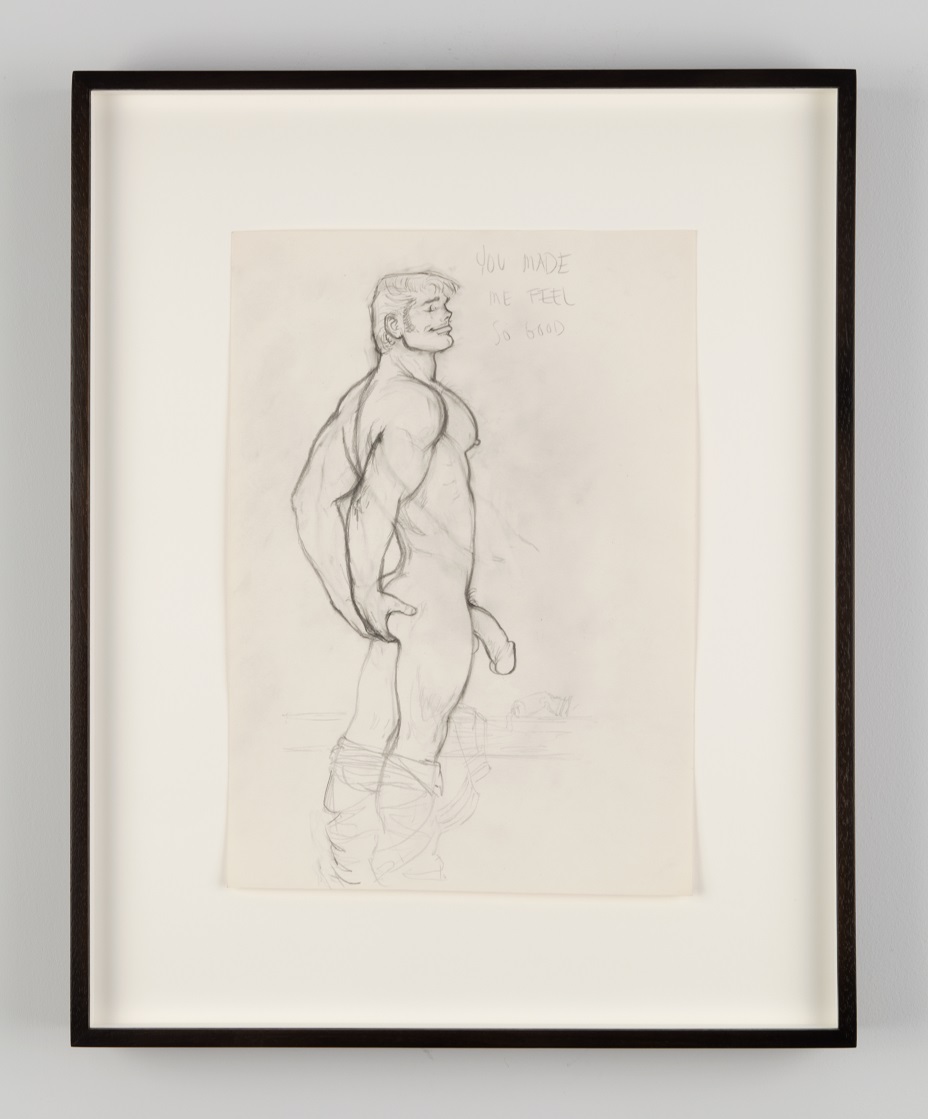 Touko Laaksonen, aka Tom of Finland, worked for decades as a senior art director at the global advertising agency McCann Erickson. While he worked his day job in advertising, he launched his career as a homoerotic artist with drawings contributed to Physique Pictorial and other “beefcake” publications of the 1950s. The Artists Space exhibition shows how his commercial work informed these drawings. The collages and cutouts show how deeply – almost obsessively – Tom sourced his imagery, with page after page of handsome open-faced young men and distinct taxonomies of other images: motorcycles, leather jackets, military uniforms, sexual positions.  They also show how preoccupied he was with the accoutrements of masculinity. In the work of Tom of Finland, masculinity is defined at least as much by what a man wears as by what a man looks like.

In the early years of Tom’s career, the dominant stereotype of the gay man was the effete, lisping, hyper fashion-conscious “pansy” epitomized on screen by actors like Franklin Pangborn and Edward Everett Horton. Although Tom’s work never seems to buy into this pansy stereotype, the earlier works in the exhibition do show a different sort of man from what would become the iconic Tom of Finland type. Trimmer, more angular, both more stylish and more stylized than the later Tom of Finland man, the men in the gouaches from the 1940s look like nothing so much as a group of Arrow Collar men getting together for a good time of a very particular kind. Even in these early works, the maleness of these men is defined as much by what they wear as it is by their exposed penises – fedoras and sport coats, or ball caps and jeans. Masculinity in Tom’s work is coded in a material, commercial way that is informed by the advertising milieu in which he worked. 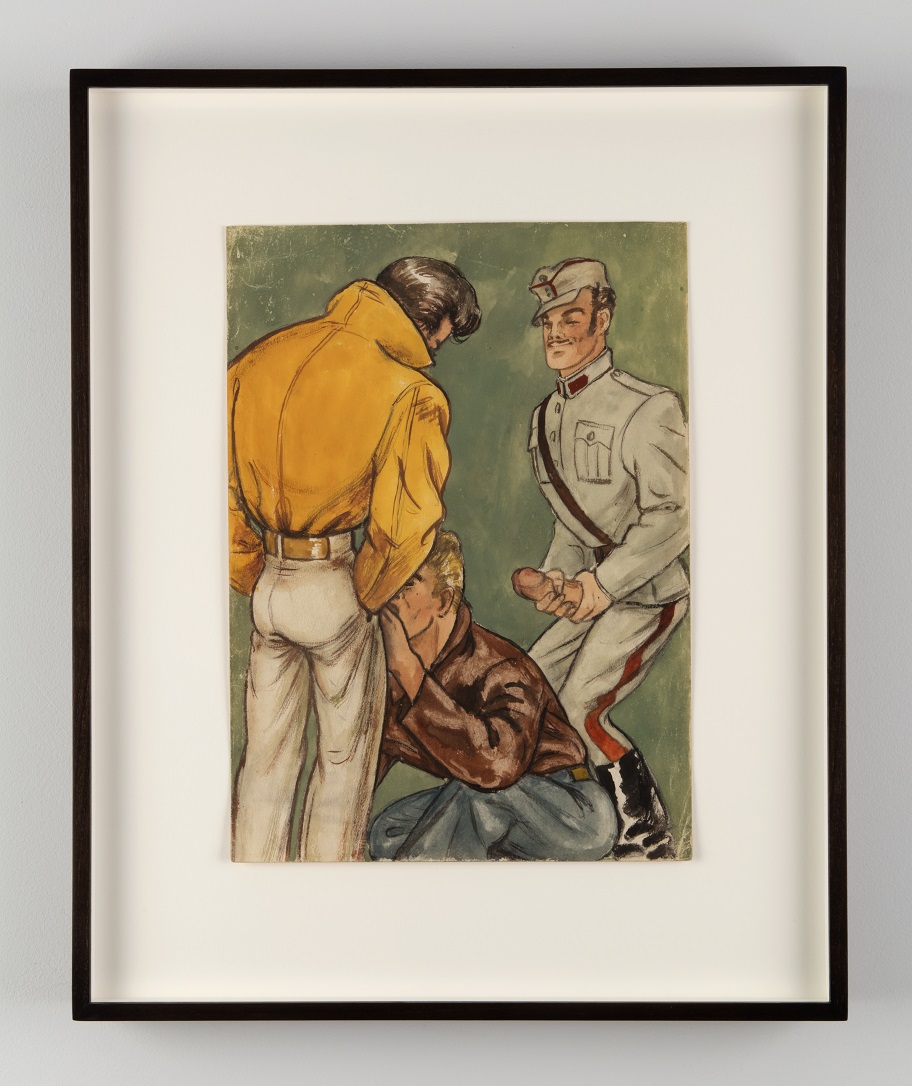 In the more mature work, the hyper-masculine military men, policemen, and leather-clad bikers of the classic Tom of Finland style emerge from among the middle class, soignée men of the 1940s. Touko Laaksonen had a personal fascination with military uniforms, and uniforms of all sorts are a consistent trope throughout the work. Sailors, soldiers, and policemen appear and reappear, as do leather-clad bikers and denim-clad lumberjacks. The style of the work changes – everything becomes sleeker, smoother, shinier – but an attention to surface is constant. The nubby texture of a tweed sport coat yields to the slippery gloss of a leather jacket. (And nobody can draw leather jackets like Tom of Finland.) But always there is an awareness of the material attributes of masculinity. It’s no coincidence that many of the men in Tom’s erotic drawings are not nude. Their exaggerated chests and exaggerated genitals may be exposed, but they are often in some state of partial undress that allows for the inclusion of garments signifying masculinity: a leather jacket open to expose a beefy chest; the fly of denim jeans open to reveal an erect penis; a sailor’s pants bunched around his ankles.

The Artists Space exhibition makes clear that Touko Laaksonen’s “daytime” work as an advertising art director informed and supported his “nighttime” work as Tom of Finland. In doing so, it shows that while Tom was producing an image of the gay man that countered the oppressive stereotype of the effeminate pansy he grew up with, he was also part of an important current in 20th Century art.

Tom of Finland: The Pleasure of Play