The British artist Tacita Dean, who is normally based in Berlin, has spent the past year in Los Angeles as the Getty Research Institute’s current Artist in Residence.  Best known for her 16-mm films in which themes of time, disappearance, and materiality predominate, the artist has recently been working on a series of large-scale drawings—a medium to which she returned in 2012, following a ten-year hiatus.  As her research assistant at the Getty, I jumped at the chance to visit Dean in her Culver City studio.

Dean’s blackboard drawings, as they’re known, consist of white chalk upon panels of Masonite that have been readied with blackboard paint. Once the artist has drawn her markings upon the boards, she then laboriously blends the atmospheric traces with her fingertips.  It was with a suite of these works that the artist inaugurated The Drawing Center’s Drawing Room space in the winter of 1997.  The inherently ephemeral nature of working in such a medium—whereby the drawing could easily change instantly were the surface to be wiped clean—is one well-suited to the imagery Dean chooses to depict in her new series. 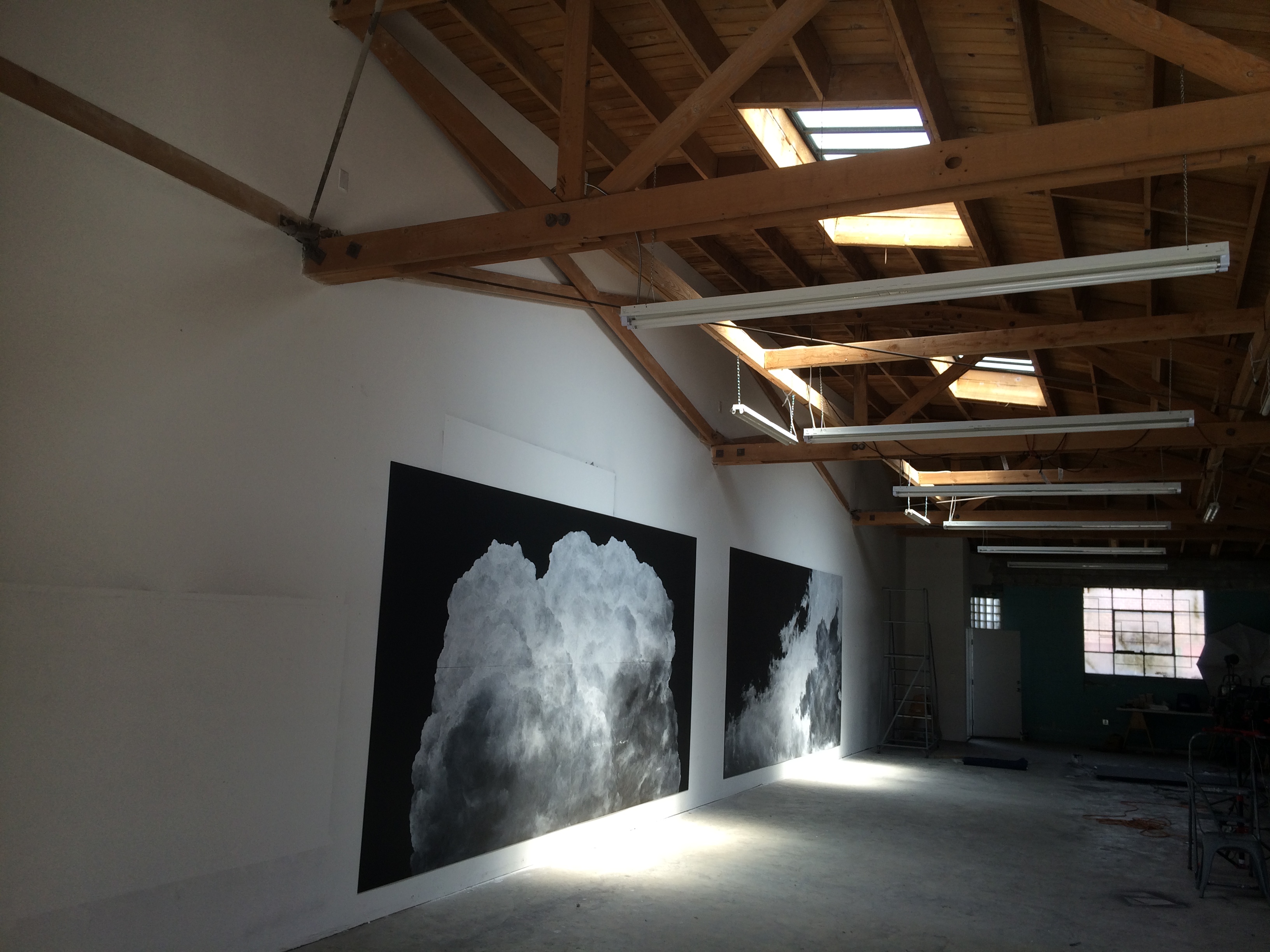 Hanging side-by-side on the studio wall are two drawings each measuring eight feet tall by sixteen feet wide, and both reveal an imposing, partially illuminated cloud.  The central form in the work, H540, cuts a vast swath across the panel, while smaller wisps break off, threatening to dissipate altogether.  Sunset, in contrast, depicts a cloud of sculptural heft whose edges remain contained within the formation, which seems to rise and billow en masse.  With each work positioned beneath a skylight, the drawings appeared theatrically lit during my visit, where the streaming morning sun heightened the interplay of light and shadow between the chalky whites and grays of the clouds, and the deep darkness of the blackboards. 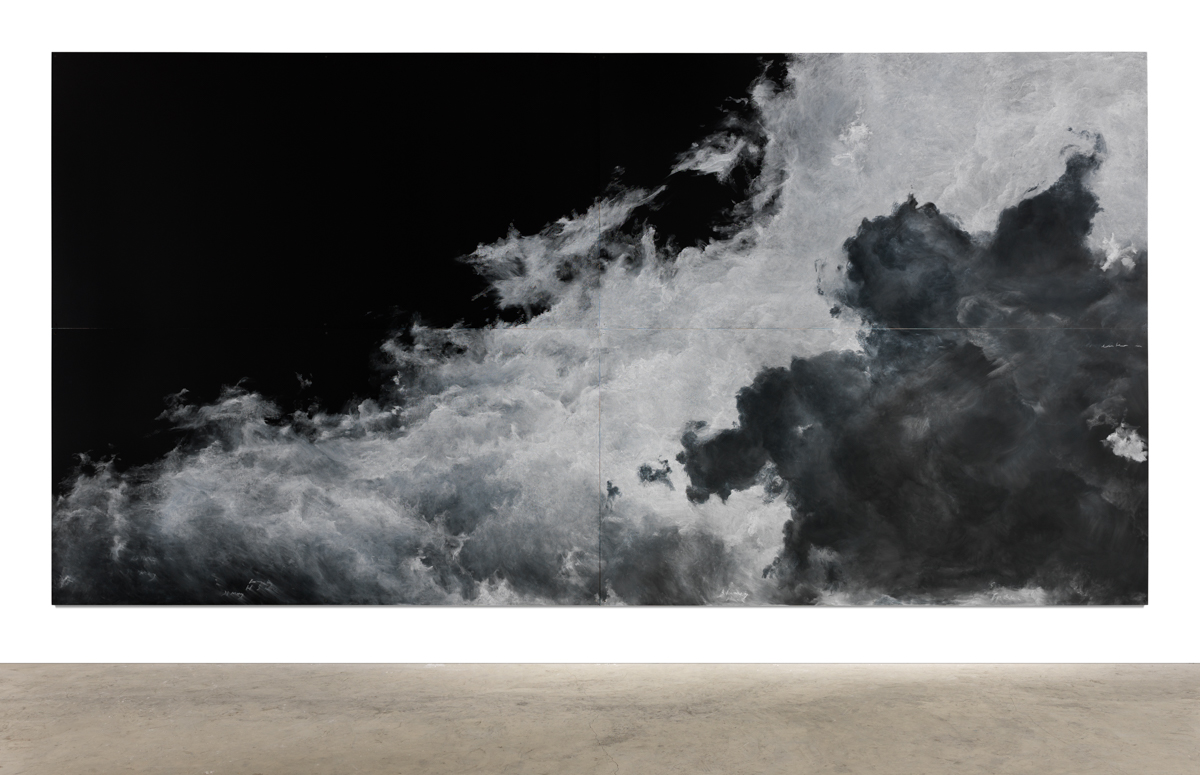 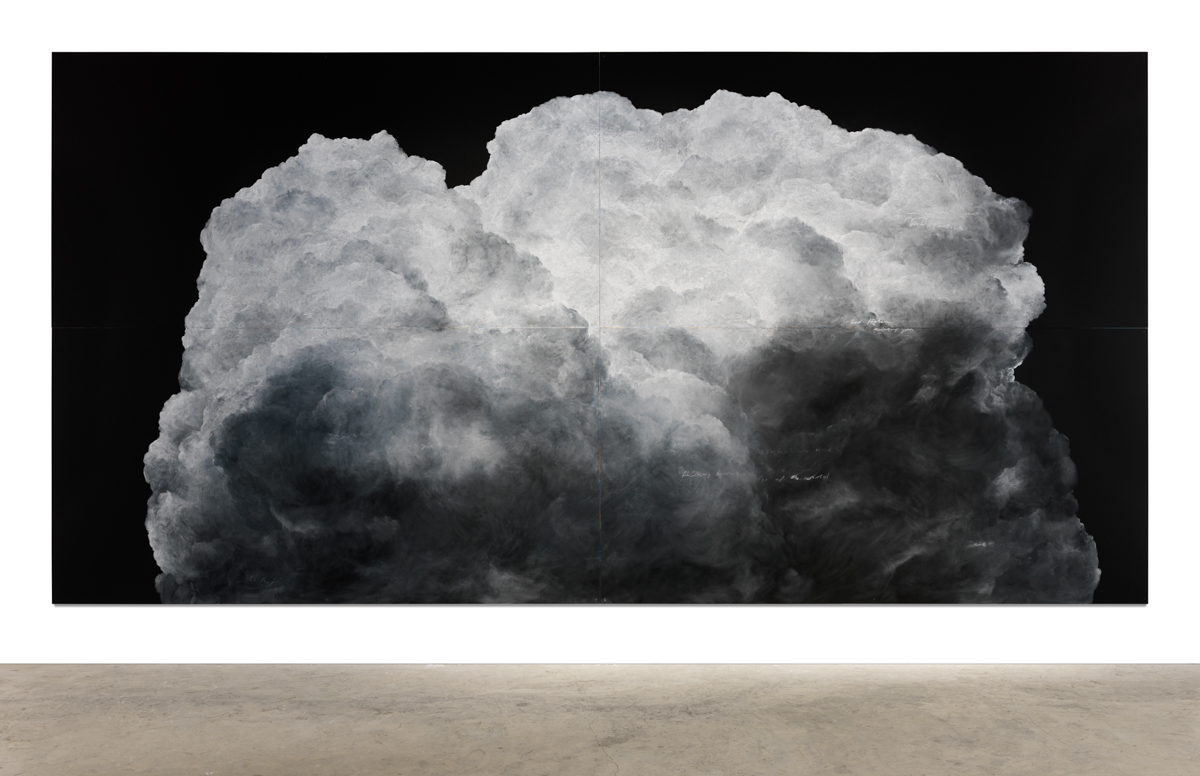 Embedded in these contrasting shades are various fragments of text.  The scrawled snippets placed within the clouds are only intermittently legible and in fact Dean often begins her drawings with the writing of a word or phrase, building her imagery amidst a mass of accrued scribbles.  These are largely personal notations, without a traceable narrative attached.  H540 bears the floating texts “enter in,” “forgetty,” the titular “H540,” a humorous “blimey,” and “pannus,” which names the type of smaller, ragged clouds depicted.  In Sunset, one finds a date here, the letters “LA” there, and a line from Lord of the Flies, reading “fading knowledge of the world,” which itself fades. 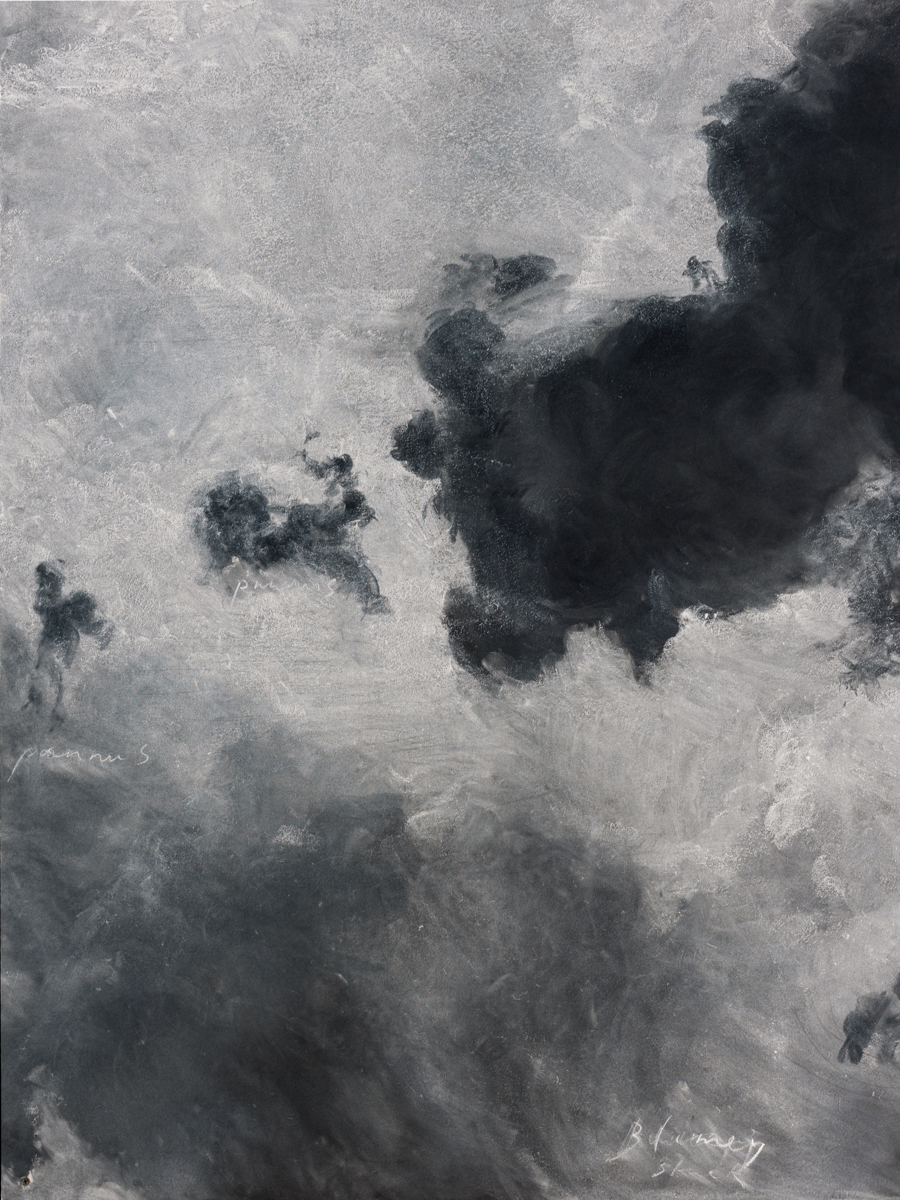 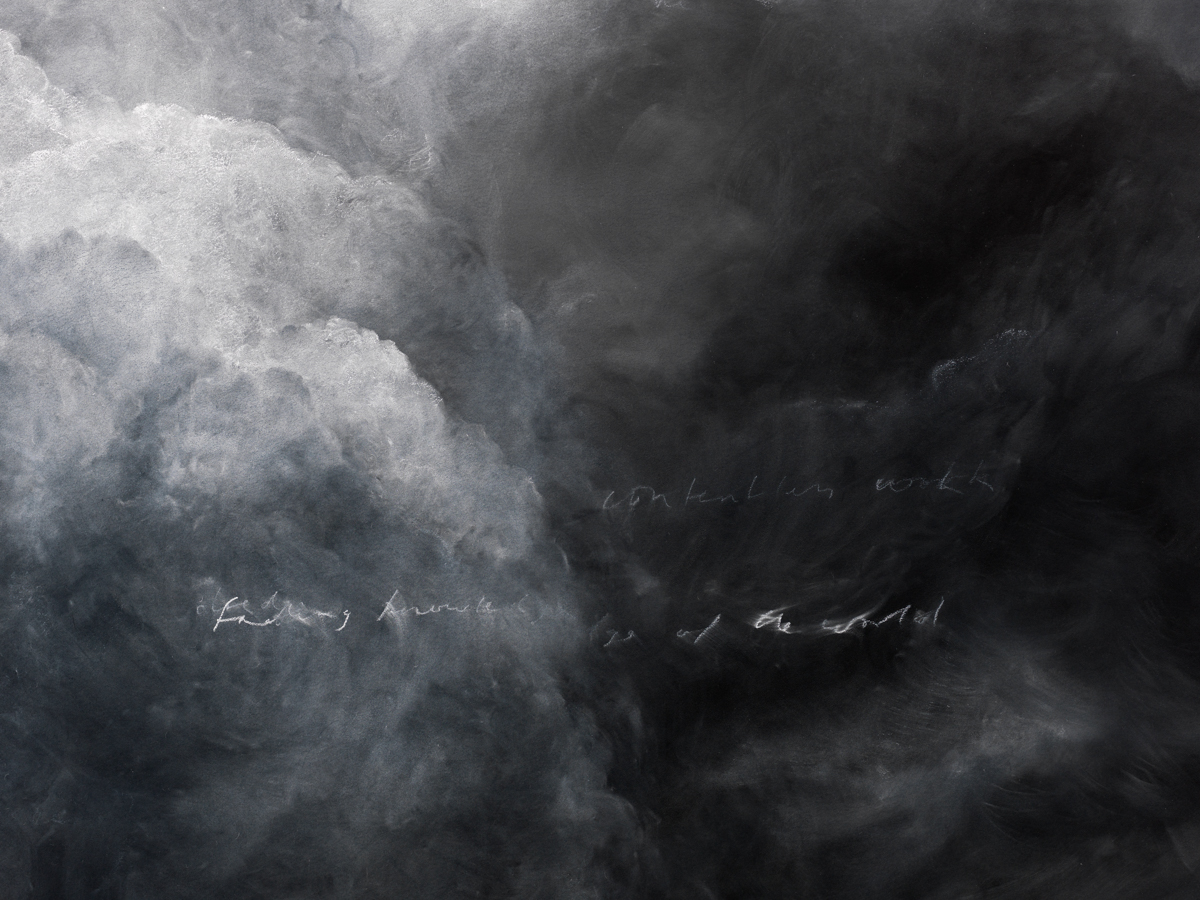 The mention of LA in Sunset relates in part to Dean’s conception of these new works.  Some of the previous blackboards have depicted restless seas, rising riverbeds, and dramatic, snow-capped mountains.  Knowing that she again wished to render a nature in flux, Dean had thought of turning to clouds for some time.  She relayed, however, that she had pictured Los Angeles devoid of clouds, bearing only sunny skies, until she arrived and discovered the striking formations that presented themselves.  Consequently, Dean began translating the azure skies into obsidian blackboards, capturing the shape-shifting volumes of Los Angeles clouds.

As I leave the studio, Dean shows me her hands where her fingerprints have begun to wear away due to the rigorous rubbing of the chalk.  In this manner, the artist physically embeds a piece of herself in the works, which by nature of their medium, threaten to disappear themselves. 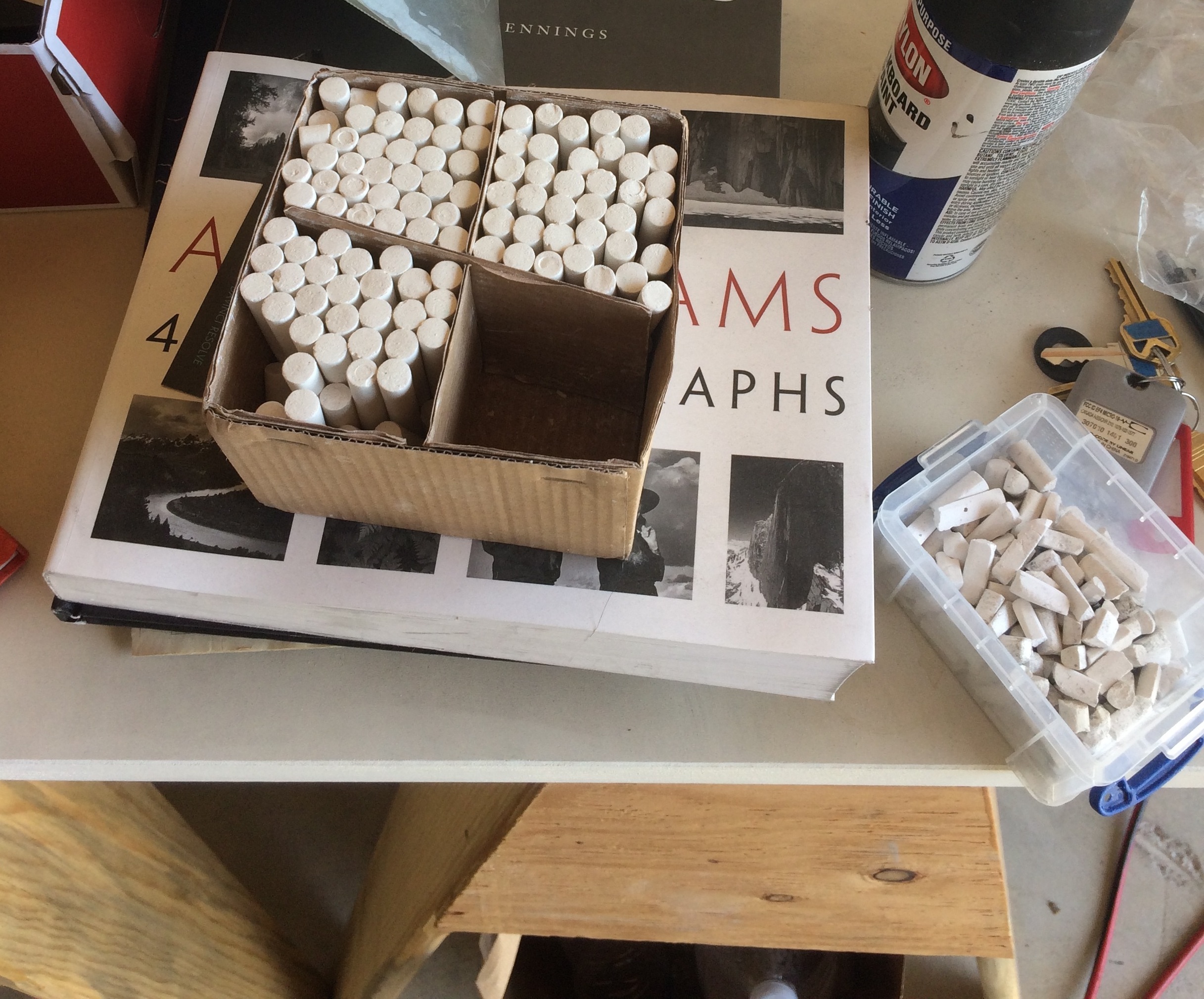