The artist E.V. Day is known for her gravity-defying installations which explore sexuality and humor through her use of fetishistic clothing—which she deconstructs and suspends with monofilament as if caught in flight or an explosion. During a recent visit to E.V.’s studio, we were struck by her wide range of materials and imagery even as they consistently reference similar issues of content.

Upon entering Day’s studio, we first encountered two of E.V.’s suspended forms: the first being the ghost-like and bloody nightgown of Lucia (from the series Divas Ascending, commissioned by the New York City Opera) and the second, a black and hot-pink flamenco dancer’s dress tipped upside down and caught in a whirling motion. These works are reminiscent of E.V.’s 2000 Whitney Biennial installation Bombshell, a reproduction of the famous white crepe dress worn by Marilyn Monroe (in the film The Seven Year Itch)—torn apart and suspended using monofilament and turnbuckles. 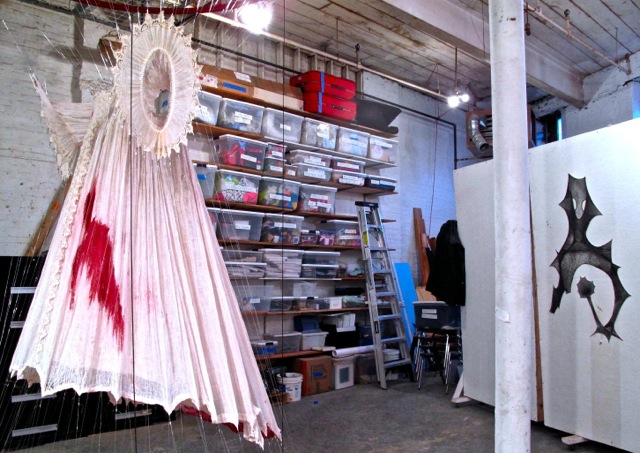 On one large wall of E.V.’s studio there is a multitude of clear plastic boxes which she uses for storing art materials. The boxes are organized with labels like, “flamenco dresses,” “matador cape,” “fishnet and stockings,” “mummies unfinished,” “mummies to sand.” One bin labeled “pleasers” contained a single pair of glossy red platform heels in addition to two other unlabeled shoe boxes, which in that context, was provocative.

E.V. explained that her installation work “transforms icons of women’s empowerment (and entrapment) into entirely new objects that confound conventional readings of these clichés, refracting a range of emotions: anxiety, ecstasy, liberation, release. I draw inspiration from the optimism and imagery of American retro-futuristic architecture and science fiction films in conjunction with the history of feminist art.” 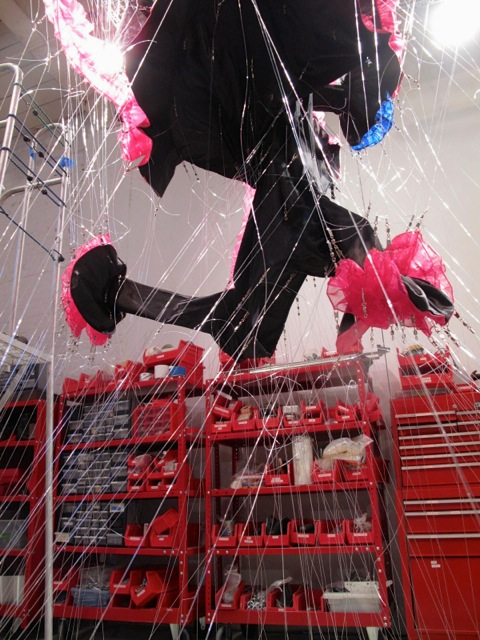 E.V. was excited to talk about her most recent project—a commissioned site-specific piece at a neo-Expressionist building at Philip Johnson’s Glass House estate which is humorously called “Da Monsta.” “There’s an alluring mischievousness to the structure that seemed in keeping with its moniker and seemed distinctly masculine in nature. My instinct was to harness it with a wiliness associated with or akin to a female-styled opponent. On the outside of Da Monsta, I cast three huge spider-web-like nets fashioned from climbing ropes over the building that look as if the monster is being captured.” The web on the architecture recalls E.V.’s use of nets and fishnet stockings in her earlier work. E.V. showed us a scale model of the interior space—an installation with red cross-crossing cords that “visually corset or capture the space.” Once inside the structure itself, the visitor encounters a thrumming sound that seems to emanate from beneath the floor. It is, in fact, an amplified recording of E.V.’s cat purring. “My work as always involved materials under tension,” E.V. told us. “Here, I think, the tension in the lines has an analog in the metaphorical tension between my own respect for Johnson’s creation and my desire to play in my own way with his own playful creation. I like to think that in dominating the monster, my installation also gives it a life, or vitality, it didn’t have before.” 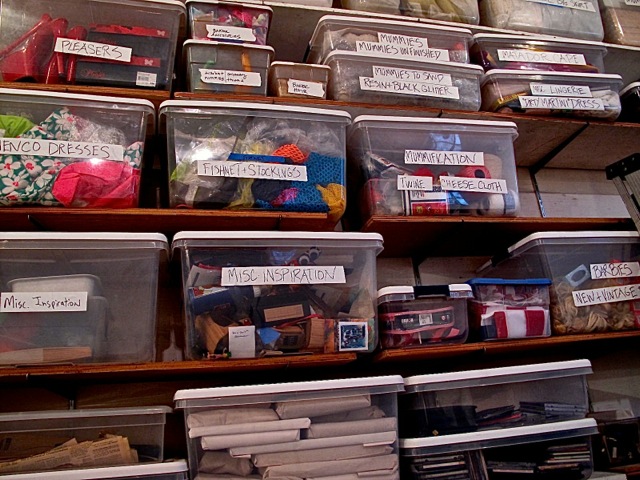 We also discussed her upcoming involvement in Open Sessions, new platform for artists at The Drawing Center. She is one of four Open Sessions Fellows, along with Emilie Clark, Nathan Clark, and Kamrooz Aram. E.V. described her relationship to drawing: “As a multi-media artist doing sculpture, suspension installations, digital images, 3-D printing, print-making, etchings and reliefs, “drawing” is a catch all.  My suspension installations are 3-D drawings in space. The open ended-ness of “drawing” as noun or verb as a basis for discussion leads me to imagine a new vocabulary which may be born to describe the term in the Open Sessions think tank.” As we identify the themes and processes that artists are engaged with it has become evident that E.V.’s  exploration of  sexuality and humor will connect her with several Open Sessions artists and their future projects at The Drawing Center. We at The Drawing Center are excited about the beginning of the new program and the involvement  that E.V and the other Open Sessions fellows will have with the participating artists in developing installations and programming.