Former Editor of The Bottom Line Kaegan Sparks speaks with curator Nina Samuel about her exhibitions on drawing as an epistemic tool in the sciences. 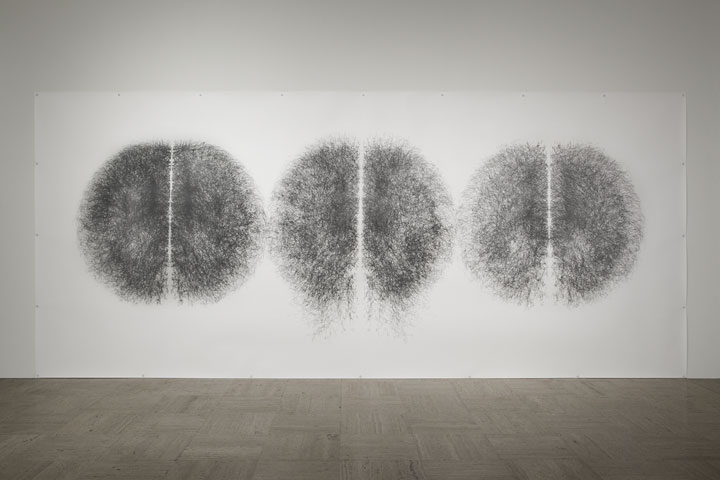 Kaegan Sparks: Your exhibition The Islands of Benoit Mandelbrot: Fractals, Chaos, and the Materiality of Thinking, presented at Bard Graduate Center in late 2012, demonstrated how visual representations of scientific theories can serve not just as descriptive models of an end-product, but fundamental tools for their very conception and development. You’re taking this procedural application of drawing further with a new exhibition, My Brain is in My Inkstand: Drawing as Thinking and Process (on view until March 30, 2014 at the Cranbrook Art Museum in Bloomfield Hills, Michigan), positioning “drawing as epistemic process in the arts and the sciences alike.” What instigated this inquiry for you?

Nina Samuel: The idea to push the core argument of the Mandelbrot exhibition into the realm of contemporary art and other scientific disciplines had already started to take shape in my mind when I curated the exhibition at the Bard Graduate Center. This idea was largely inspired by the observation of two parallel developments.

In the last decade, a growing number of exhibitions have tackled the topic of drawing in twentieth-century and contemporary art. At the same time, drawing as a practice of the emergence and conceptualization of ideas has increasingly become the subject of academic research, specifically with regard to the intersection of the history of art and the history of science. My Brain Is in My Inkstand combines these two fields and translates core questions of recent academic debates in a contemporary art exhibition.

At the center of this research is the insight that the arts and the sciences share fundamental resemblances in the moment of conceiving an idea, or in the process of poiesis, which is the Greek word for “making.” In the process of handling visual representations of all kinds (flat images, three-dimensional models, moving images) new ideas and theories emerge. The term emergence is central: it is used to convey the idea that images do not just illustrate a thought after the fact, but that they fabricate it according to their own pictorial logic.

There is always an anarchistic and unpredictable element involved in this moment of poiesis. Historian of science Hans-Jörg Rheinberger notes that scientific knowledge does not emerge as a logical sequence or well-ordered series of ideas but through a continuous play with material inscriptions and a shuffling and reshuffling of research notes. It is in this shadowy zone halfway between an idea and a fully-fledged concept that the arts and the sciences share similar creative processes on paper. 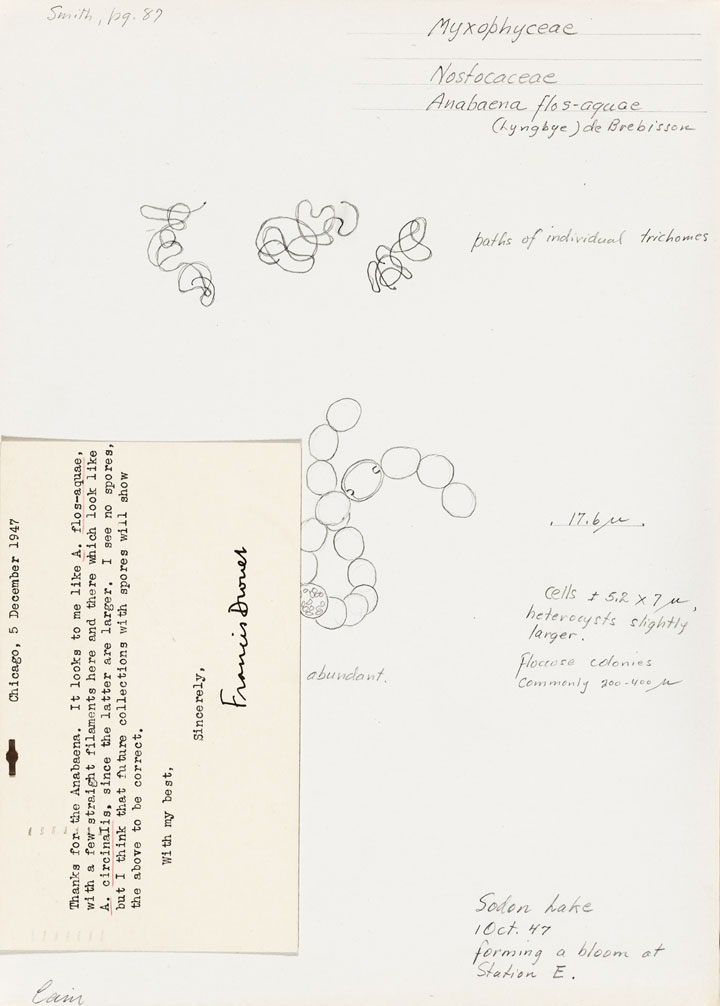 KS: Can you speak about specific instances of images being used as part of a process of scientific discovery?

NS: The attempt to depict, to describe, to record, to classify, and to understand the observed through the production of pictorial representations is one of the most elementary operations of the sciences. For example, the analysis of shapes and forms and the classification of morphologies are crucial methods to biology and anatomy. Only representations make it possible for ‘things in nature’ to migrate, to be written about, to be pointed at, and most importantly, to start to exist as ‘scientific things.’ And this doesn’t stop at the visible world surrounding us, as making the invisible visible is another basic operation in science (think for example of the visual technologies of the microscope, telescope, and x-rays).

Drawings are a particularly strong example of the inextricable link between abstract scientific reasoning and visual imagination, an idea referenced in the exhibition title My Brain Is in My Inkstand. It is inspired by a quote of Charles Sanders Peirce (1839–1914), one of America’s most important philosophers, a celebrated inventor of pragmatism and early advocate of semiotics whose original drawings are shown in this exhibition for the very first time – something I am particularly proud of! Peirce was an obsessive draftsman who developed his philosophical and scientific ideas exclusively through his drawings. For him, drawings are a fundamental prerequisite for all mental activity. Peirce’s more than 100,000 preserved manuscript pages, archived at Harvard’s Houghton Library, are cluttered with pictographic symbols, fierce grimaces, and whirling loops bursting from equations and exploding in between lines of text. 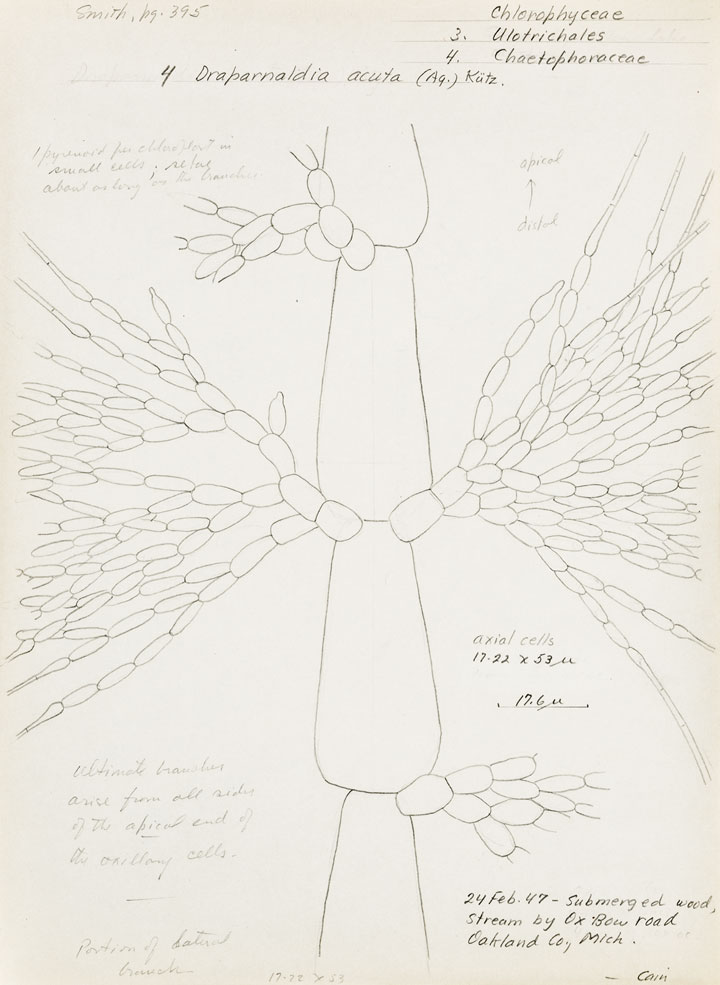 As a second example taken from the exhibition, I’d like to talk about the role of drawing in microscopic observation. In the preface to his 1665 publication Micrographia, English natural philosopher Robert Hooke notes that for the trustworthy description of a microscopic object, two essential elements are required: “a sincere Hand, and a faithful Eye, to examine, and to record, the things themselves as they appear.” Hooke’s observations would have been impossible without a technical device. With the invention of the microscope, drawing gained an unprecedented significance, functioning as a decisive bridge between observation and analysis.

Stanley A. Cain’s drawings of microorganisms included in the exhibition are outstanding examples of this epistemic process.  A leading ecologist and conservationist, Cain worked at the Cranbrook Institute of Science from 1946 to 1950. While his academic expertise was in botany, he is widely acknowledged for pioneering the study of the relationship between people and the environment. In 1947, Cain produced several hundred drawings based on collaborative field research in Sodon Lake and Cranbrook Lake—both located in Oakland County, Michigan—with the intent to examine “the interdependence of animal and plant populations and the complex environmental factors that cause fluctuations of natural populations.” Among his sizeable collection of papers presented in the exhibition are typewritten notes documenting the role of drawing in the communication process: representations migrate between scientists, immersed in a process of renaming, reframing, and recontextualizing systematic observation. 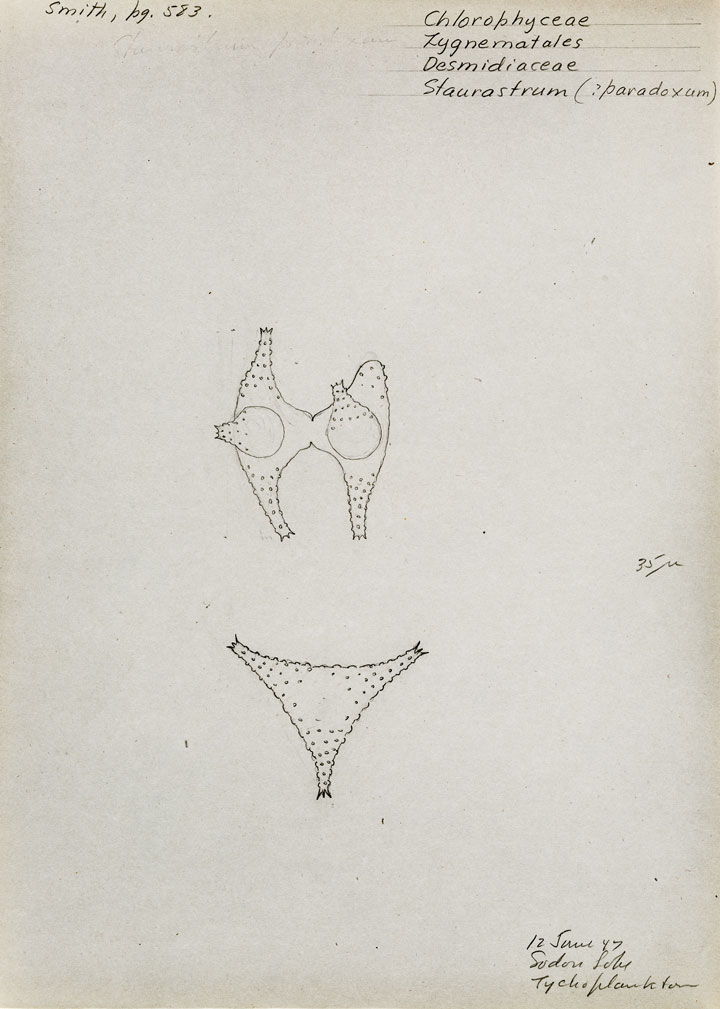 Images are always part of an endless chain of representation, or, in the words of French sociologist Bruno Latour, “Isolated, a scientific image has no referent.”  Cain’s drawings demonstrate a considerable level of critical reflection about the potential and the limitations of pictorial representations for thinking, while also presenting a playful and humorous commentary on the seductive side of images for the imagination: one microorganism discovered in Sodon Lake takes the unmistakable (and unforgettable) shape of a bikini.

Cain’s papers showcase the basic struggle of all scientific endeavors: to keep representations at an analytic distance. The Baconian ideal of scientific objectivity as expressed by Hooke is a highly mobile concept. As much as the microscope shifted the frontier of the visible, it also opened up new shapes of phantasm and new spaces for the imagination. It is by means of drawing that the objects of science are constructed; they would not exist without this interplay of instrument, hand, and eye.

KS: You speak about a “pictorial turn” in the sciences around the rise of computer imaging in the 1980s. This syncs in an interesting way with the purpose of the Reanimation Library, with which The Drawing Center collaborated last year on a series of programs based on images—many scientific—that bear the specific bygone aesthetic of pre-digital print culture (which, for the Library, is worth archiving and preserving). You’ve insisted that hand sketching still performs a significant function for scientists, even given their access to sophisticated technology: “Frequently, the computer alone is unable to give an insight, and hand drawing becomes necessary for transforming a confusing computer image into a new idea or theory.” In what contexts have you found the physical activity of drawing particularly important, where one might assume precise computer-generated imaging to be superior?

NS: The statement quoted above relates actually to my ten-year-long research on visual representations used by mathematicians and physicists working in the field of ‘chaos theory’ during the 1970s and early 1980s. Focusing on their previously unknown or overlooked working materials, notebooks, drawings and scribbles, and experimental films, the fundamental role of hand drawings as a means of understanding—at times even sculpting—the information data was revealed.

Currently, I am researching the role that hand drawing plays in medical education and the training of the eye, especially in relation to understanding histological specimen. I am in touch with medical departments at different universities who are kind to provide me with their histological drawings. It seems that no other medium can foster such a deep understanding of the anatomy of cells and tissues than hand drawing. This is another an astonishing proof for the importance of drawing as a means of thinking in the sciences, however advanced the computer technology might get.

KS: Emma Cocker, a writer who participated in artist Nikolaus Gansterer‘s collaborative project Drawing a Hypothesis, defined drawing in her contribution as “a conjectural operation, the tentative manifestation of an insurgent if.” That phrase has stuck with me, and your assertion that sketches “document the process of intellection: the sudden urge of an emerging thought taking shape” brought it to mind. In your research, how has the spontaneous nature of drawing, perhaps in the activity of brainstorming, cropped up?

NS: The description of drawing by Emma Cocker is in fact very central for My Brain Is in My Inkstand—in fact, the collaborative work of Cocker and Gansterer is actually shown in the exhibition as well. Among the other included works that strongly demonstrate the “spontaneous nature of drawing” are Patricia Johanson’s plant scribbles prefiguring her ecological large-scale art projects, Carolee Schneemann’s series of Meat Joy drawings that were fundamental to develop her iconic performance of 1964, Morgan O’Hara’s LIVE TRANSMISSION drawings that track movement as the energy of the present moment, Benjamin Forster’s research project where he basically turns a whole museum into a drawing machine, and in a wider sense also Chemi Rosado Seijo’s participatory skateboard project.

KS: Tell me more about Forster’s and Seijo’s works.

NS: Both artists are part of the exhibition section “Ma(r)king Public Spaces.” This section investigates the capacity of drawing to become an agent by affecting our perception, the design of our theories, and subsequently transforming our reality in novel ways. It questions if drawing has a utopian potential and pushes the notion of drawing into the sphere of public art projects, institutional critique, and architecture.

Chemi Rosado Seijo’s participatory project explores the correlation between skateboarding and artistic practice, making local communities visible and redefining urban space. The work on display, Untitled ’07-’70 (My body space ramp), is part of his History on Wheels project, an ongoing exploration of the correlation between skateboarding and artistic practice, with a focus on the convergent timelines of the invention of skateboarding and the emergence of the abstract expressionist movement. For its Cranbrook iteration, the artist constructed a fully functional half-pipe at Modern Skate Park in Royal Oak, Michigan, one month prior to the exhibition opening. As the ramp was used, the marks and scratches on its surface became a gestural drawing that was then peeled off and reassembled on one of the gallery walls. 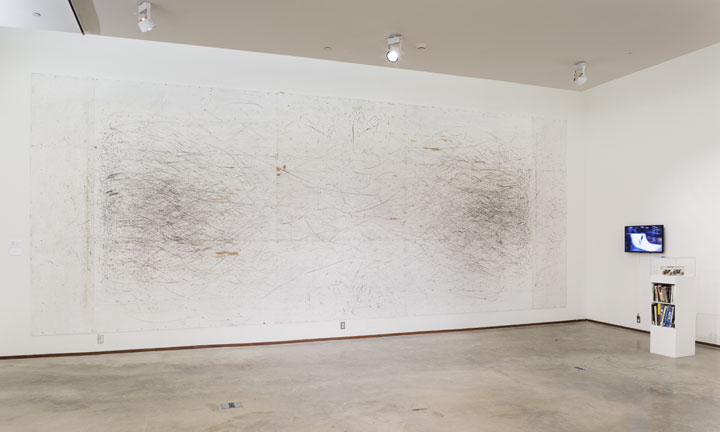 In Benjamin Forster’s Organizational Drawing Residency, the artist confronts visitors with a collection of doodles and marks accumulated during a six-month residency at the Museum of Contemporary Art (MCA) in Sydney (Fig. 7). He reveals how even the most latent forms of drawing underpin an institution. Forster excavates conscious and unconscious graphical notations, ranging from personal notebooks and visitor evaluations to Post-it notes found in the kitchen, the tattoos of the staff, and graffiti left in cavities behind the museum’s walls. The artist’s own practice of note-taking constitutes the second layer of the work. Foster develops diagrams in order to translate the given institutional marks into a tentative taxonomy. Continuously updated, the artist’s notes are sent to Cranbrook via a fax machine placed in the center of the gallery. Though located on the other side of the world, the visitor gains insight into every step of Foster’s research progress, becoming a voyeur of the intimate thought and creation process of both the MCA’s museum staff and the artist himself. 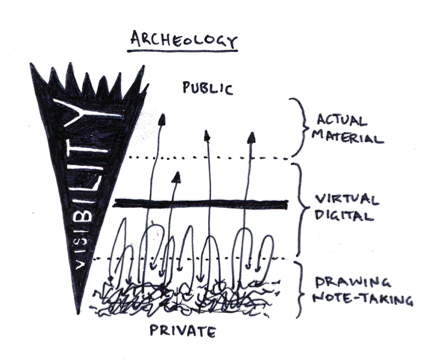 Parts of the conversation above draw from excerpts of texts written for the exhibition catalogue for My Brain Is in My Inkstand, to be published in January 2014.