Notebook page from the development of NOTATIONOTATIONS

In the 2013–14 exhibition season, The Drawing Center will introduce a series of three commissioned performances that showcase important intersections between time-based practices and visual art. Two of the three performances involve dance. The first is artist Susan Hefuna and choreographer Luca Veggetti’s NOTATIONOTATIONS, in which Veggetti’s dancers gradually erase Hefuna’s expansive web of chalk lines on the gallery floor. The second is Rashaad Newsome’s FIVE (The Drawing Center), a multimedia performance that highlights the art of voguing as it relates to drawing.

The interweaving of dance and visual art within the Western context has come a long way since Degas’s pastel depictions of ballerinas and the set designs of Pablo Picasso, Henri Matisse, and Joan Miro for the Ballets Russes. Given the insistence on (or indeed, rejection of) form and line in both disciplines, perhaps it is not surprising that they have eventually come together. However, it is also the spirit of experimentation, openness, and collaboration that has driven dance and art to inform each other. This was especially palpable in the US during the mid-20th century, when dancers worked with artists and composers, and artists became dancers and performers. The following is a far-from-exhaustive list of eight seminal collaborations between visual artists and dancers/choreographers in the past few decades.

Martha Graham, widely acknowledged to be the mother of modern dance, collaborated with the composer Aaron Copland on this ballet revolving around 19th century American pioneers (Copland later won a Pulitzer Prize for his composition). Japanese-American sculptor Isamu Noguchi, who worked with Graham throughout their careers, wrote that his set design for the ballet was an attempt to “arrive at an essence of the stark pioneer spirit.”

(Appalachian Spring, filmed in 1959 by Peter Glushanok and produced by Nathan Kroll for WQED Pittsburgh)

Simone Forti’s choreographic explorations of natural human movements included this piece that focused on the theme of balance. Her then-husband contemporary artist Robert Morris and Judson Dance Theater originator Yvonne Rainer stood on either end of the ubiquitous playground seesaw that emitted a “moo” sound when tilted. The piece ended with Rainer screaming and Morris reciting excerpts from Art News magazine.

For Merce Cunningham’s austere and understated masterpiece, artist Jasper Johns, of target board and American flag fame, designed seven inflatable plastic pillows painted with images from Marcel Duchamp’s The Bride Stripped Bare by her Bachelors, Even (The Large Glass). Johns was the artistic advisor of the Merce Cunningham Dance Company from 1967–80. 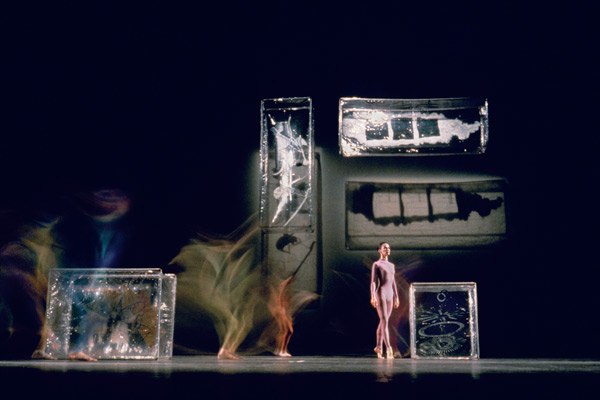 Bill T. Jones, a frequent collaborator with visual artists, worked with Keith Haring in the early 1980s to create a series of performances. In this piece, Haring responded to the movements of Jones’s body by painting directly on the dancer’s skin. This was extensively documented by photographer Tseng Kwong Chi, as were many of Haring’s other works.

Much like Martha Graham and Isamu Noguchi, painter Robert Rauschenberg had a long and fruitful working relationship with postmodern choreographer Trisha Brown. In this solo dance–the last piece on which Rauschenberg and Brown collaborated–Brown’s back is to the audience for the entirety of the performance; all is conveyed through the fluidity of her spine.

A performance of If you couldn’t see me in 2010. Photograph by Julietta Cervantes.

This video performance and installation is the collaborative effort of artist A.L. Steiner, dance duo robbinschilds, installation artist AJ Blandford, and the Seattle-based band Kinski. Dressed in a different color of the visual spectrum in each scene, robbinschilds uses their own choreographic language in response to the natural and urban landscapes of Southern California and upstate New York.

OpenEnded Group, a collective formed by digital artists Marc Downie, Shelley Eshkar, and Paul Kaiser, has been working with choreographer Wayne McGregor to create a new digital form of dance notation that transforms language into an active dance animation that responds and adapts to the idiosyncracies of McGregor’s formal choreographic system.. The aim is for the software to become not just a useful tool, but an active participant in the working relationship between dancer and choreographer.

Example of the translation from language to choreography by the Choreographic Language Agent software.

As part of the exhibition Move: Choreographing You at the Hayward Gallery in London in 2010, French choreographer Xavier Le Roy worked with Danish performance artist Mårten Spångberg to develop an experimental system of interaction between dancer-participants, who ‘actuate’ the works in the show, and visitors. productionutilizes the museum space as a place of labor and rehearsal while allowing the audience to interrupt and engage with the dancers.

(Introductory video to the Move: Choreographing You exhibition at Hayward Gallery, London, featuring the dancers who participated in production.)