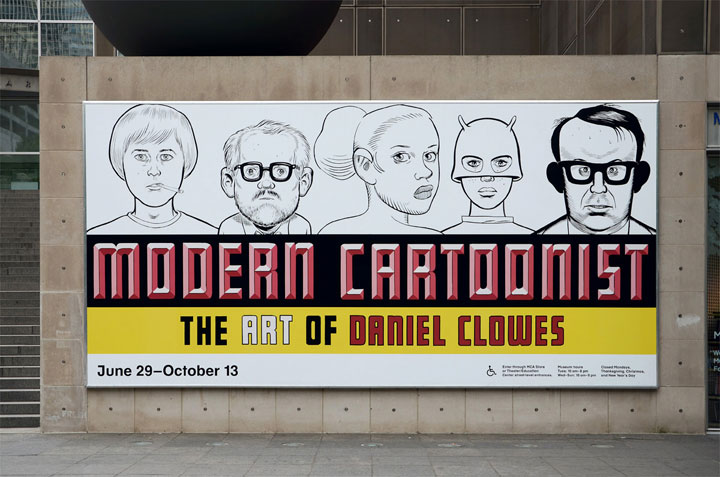 Exterior of The Museum of Contemporary Art, Chicago. Image courtesy of Berny Tan.

Currently on view at the Museum of Contemporary Art Chicago is Modern Cartoonist: The Art of Daniel Clowes, the very first museum retrospective to survey the work of the acclaimed comic book artist and graphic novelist. The Chicago-born, Oakland-based Clowes is responsible for such cult classics as Like a Velvet Glove Cast in Iron (1993), Ghost World (1997, and its 2001 film adaptation of the same name), David Boring (2000), and The Death-Ray (2011). An expanded version of a 2012 exhibition at the Oakland Museum of California, Modern Cartoonist presents more than 125 original illustrations and artifacts within thoughtfully designed exhibition spaces. 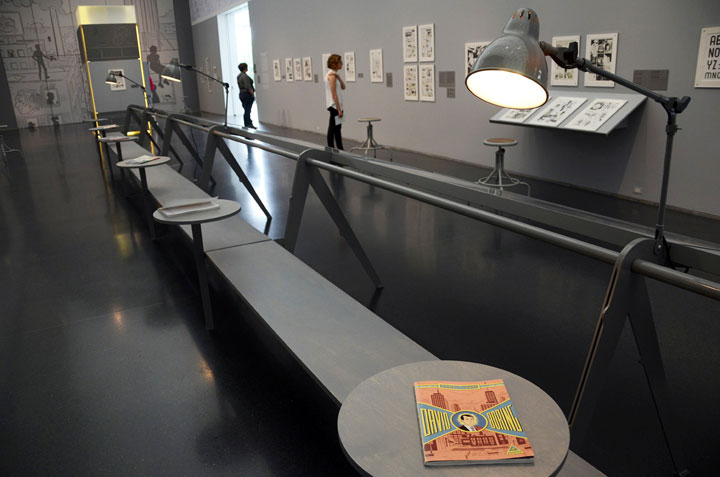 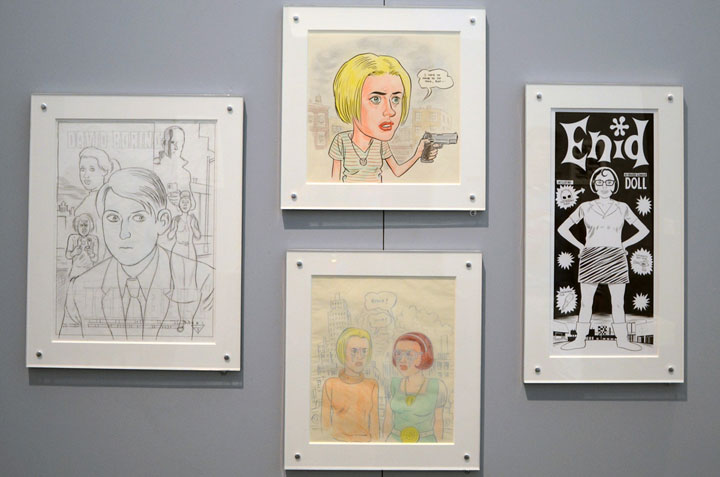 From deftly executed ink and Zipatone drawings to rich, saturated gouache paintings and rough graphite sketches, the works on display well validate Clowes’s abilities as a draftsman. One can imagine an excited Clowes fan devouring the pages upon pages of his illustrations on view in their bare, black-and-white form. For the rest of us, there is something to appreciate in both the meticulous lettering and literary content of each speech bubble. Single-page excerpts from Clowes’s most well-known comics are more than enough to bait the uninitiated into spending time with their bleak and often twisted narratives. In addition, two 20-foot-high monochromatic murals, featuring silhouettes of Clowes’s characters situated within urban Chicago, are pleasant, unexpected bookends to the exhibition’s drawings and publications. 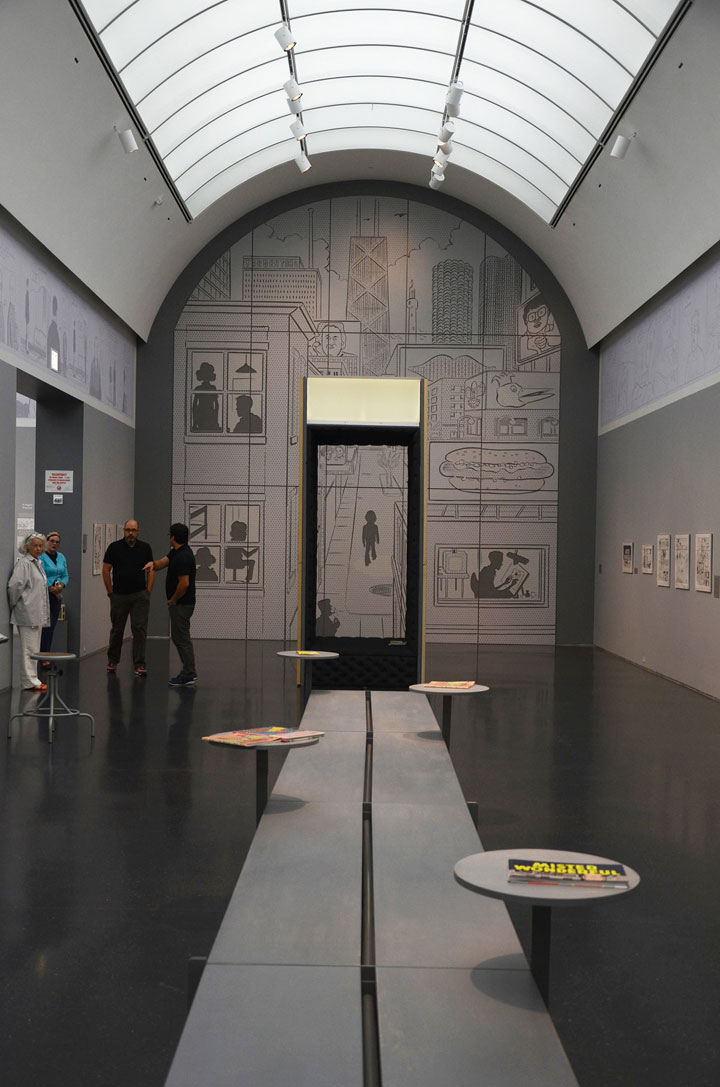 The exhibition is a joy to experience due not only to the immersive nature of Clowes’s work, but also to the exhibition design of Nicholas de Monchaux, who created a comfortable environment within which illustrations could be appreciated and comics perused. It would have been easy for de Monchaux to succumb to the seductively bright color palette of Clowes’s gouache paintings, or the muted yet diverse tones of his graphic novels. Instead, the designer opts for subtle shades of calming grays for the walls and fixtures. Ample seating is provided in the form of benches (lamps and tables included) and intimate spaces with upholstered seating where one might sit for hours on end reading Clowes’s graphic novels from cover to cover. 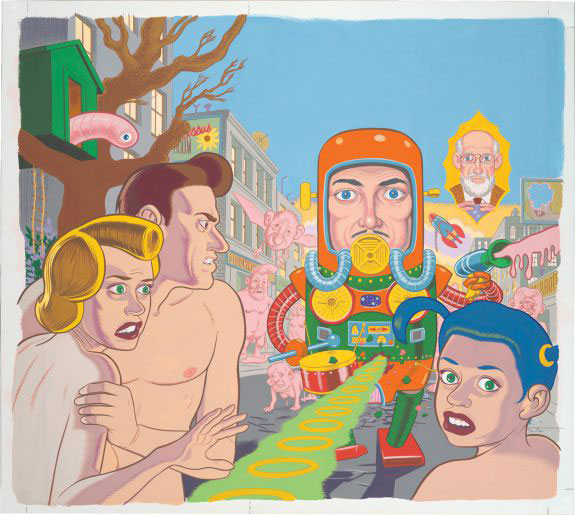 Six decades after the inception of pop art and accompanying discussions of high-art-versus-low-art, today any debate about whether Clowes’s work belongs in a fine art museum should be rendered moot. However, questions regarding if and how we should compare Clowes and his peers to such artists as Roy Lichtenstein still remain, since we can expect both to continue inhabiting museums. Curator of the exhibition Susan Miller has commented on the similarities between Clowes’s style and the flatness of paintings by Alex Katz, as if to legitimize Clowes and the exhibition; the framing and display of Clowes’s illustrations lend a certain fine art regality to his oeuvre.

The issue here goes beyond the tired back-and-forth about whether a cartoonist should be viewed as a ‘fine artist.’ The museum setting inevitably transforms the way that someone might otherwise relate to comics and graphic novels, which require much more time than today’s average museum-goer would accord to an artwork. How does one relate to material that is as much literary as it is visual within an art exhibition? Is the viewer willing to spend hours—in an exhibition space designed with that in mind—not just admiring Clowes’s inking technique, but also the dark and dysfunctional narratives that jar with his deceptively simple aesthetic? How does the art museum do justice to the works’ literary aspects in addition to their aesthetic ones? 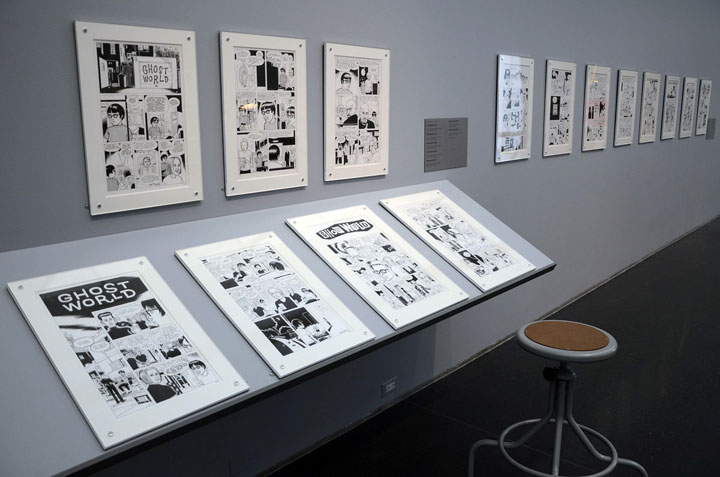 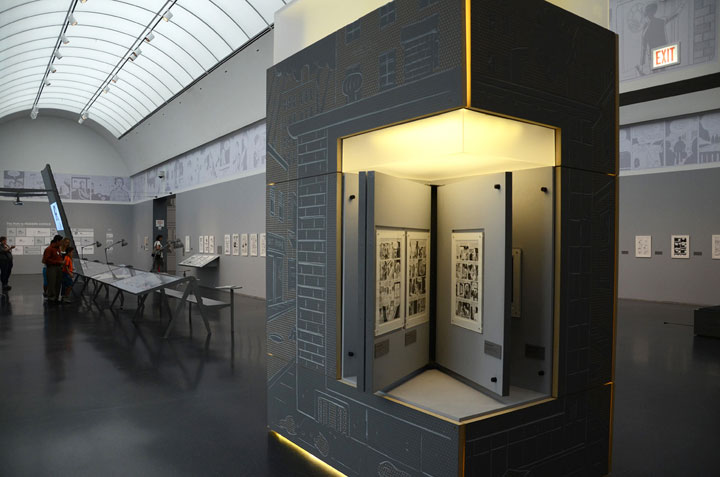 An exhibition such as Modern Cartoonist, intentionally or not, raises questions about the role of the museum in today’s world and its responsibilities in terms of education, experimentation, and even entertainment. It provides a refreshingly accessible and engaging experience to an audience with a diverse set of approaches, creating conditions that challenge both museum-goers and comics enthusiasts alike to consider Clowes’s work in a new context.