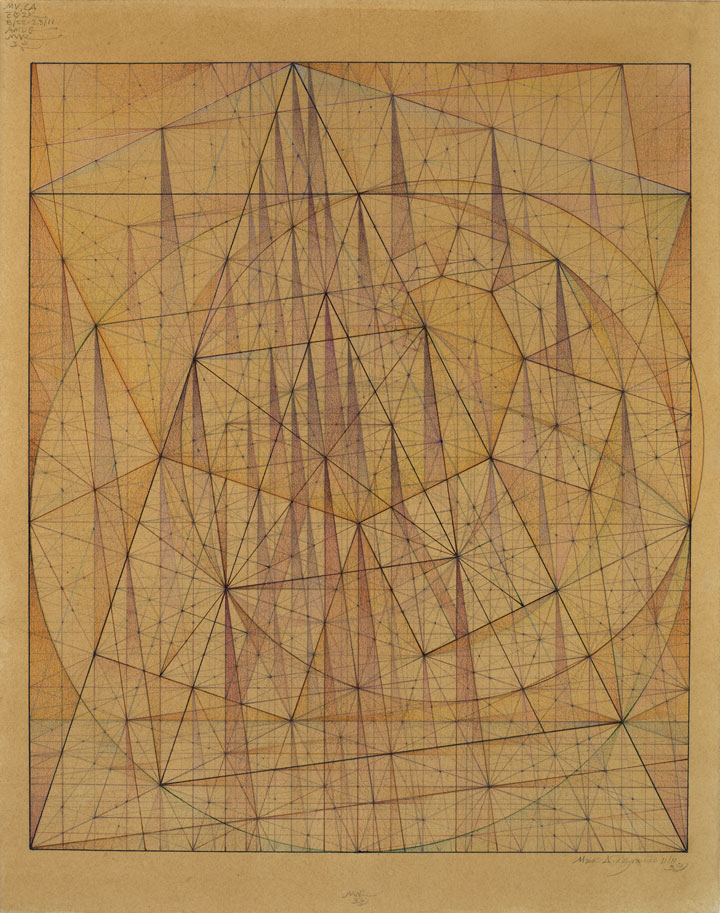 Elizabeth Gambal:  Your drawings incorporate graph-like forms and interconnected geometric shapes. How did this combination of art and geometry come about?

Mark Reynolds: It’s interesting that you see the forms as being graph-like because I do basically plot points, but these points are parts of geometric systems that I construct, either by measures or in the development of a grid. Seemingly meandering and fluctuating lines and their resulting geometric qualities that we see in graphs may look similar to my drawings. As an artist rather than a mathematician, I think geometry can be appreciated in both disciplines in part because of the spiritual qualities of numbers, and because of their ability to order chaos.

EG: What sort of geometric systems do you mean?

MR: I always begin with a specific ratio, usually in rectangular form, or with a particular geometric shape. These ratios and proportions may be taken from nature, like the golden section, or from music—for example, the Pythagorean whole number ratios.  My ratios can also be based on various mathematical sources, or on the symbolic meanings of numbers.

I also create new geometric structures from my own discoveries and inventions. Primarily, I work with the three universal shapes: the square, the circle, and triangles. Many geometric relationships can be generated from the essential elements found within the square, its diagonal, its half-diagonal, and so on.

EG: Can you describe some specific mathematical material you’ve created drawings from?

MR: I can talk about a few examples. The “Ideal Angle,” about 137.49°, can be found in the leaf distribution of certain plants.  There is no known construction for it, but I found a very close approximation using the pentagon/pentagram system and the Triangle of Pentalpha in the golden section rectangle. The Ideal Angle is in the circle at the top of my like-named drawing.

The Minor Third, a 5 to 6 ratio, is known as the “saddest sound in music.” Yet the grids that can be produced within the perimeter of the Minor Third are rich, vibrant, and seemingly endless, like music itself. The sound may be sad, but the geometry is jazzy and upbeat in its ability to improvise and produce a wide variety of rational and irrational lengths. I’ve been working with this ratio in my Minor Third Series since 2002. 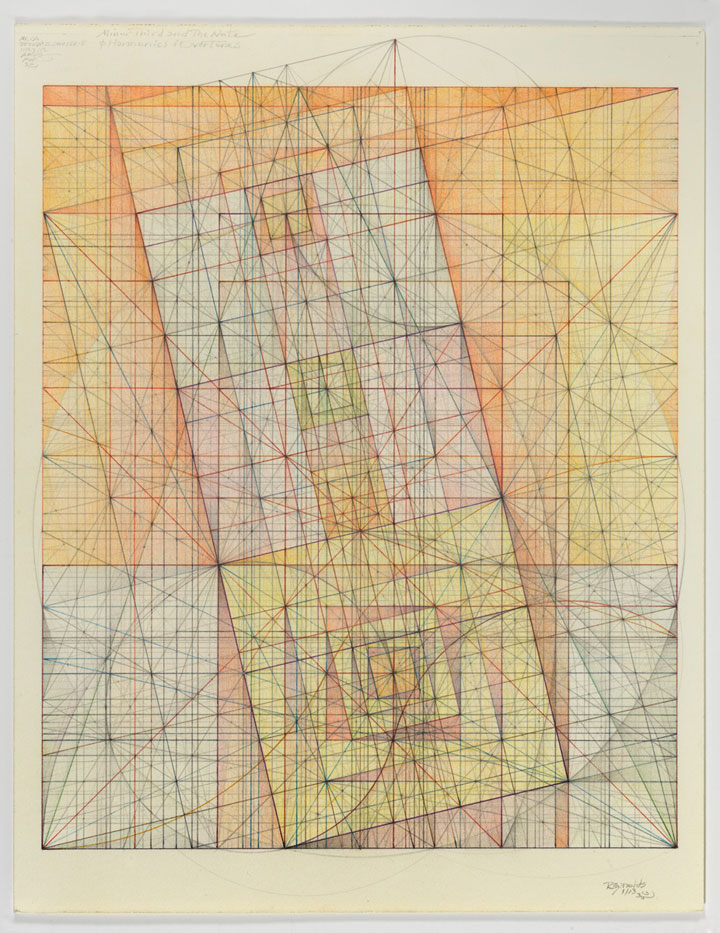 I always like to find relationships between families of ratios that are not related to one another. In this drawing, the Major Fourth, expressed in the 3-4-5 Pythagorean triangle, generates the golden ratio through the simple act of bisecting a certain angle within the triangle. This work is an ode to both the ancient masters and some early twentieth century Cubists whose interest in the golden section is reflected in the name of their collective, active from 1911 to 1914: “Section d’Or.” 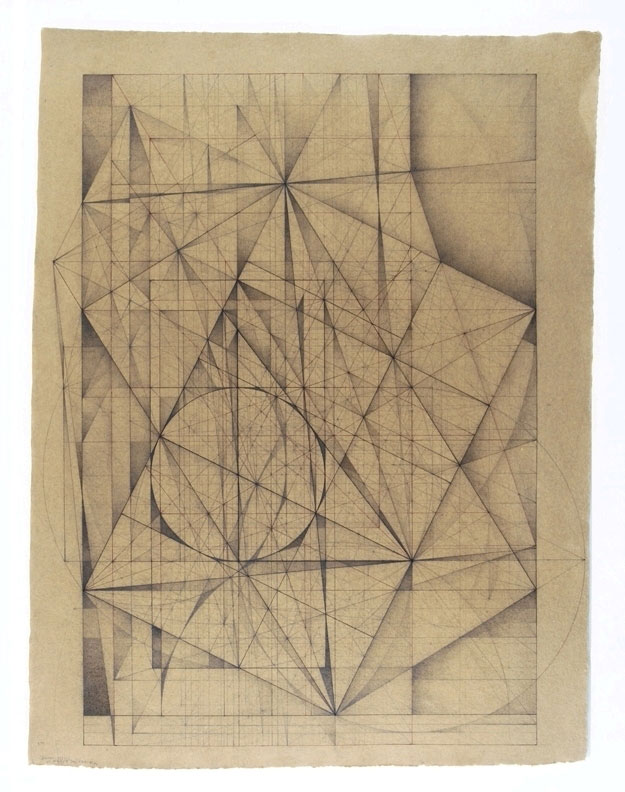 My energetic drawing Piston Effect was set into motion by the application of double square/golden section constructions on all three sides of the central triangle. This triangle is the diagonal division of the northern wall of the “King’s Chamber” in the Great Pyramid of Khufu. This drawing is my take on Rudolf Arnheim’s conception of the “piston effect” in works of art (see his book The Power of the Center, 1982). 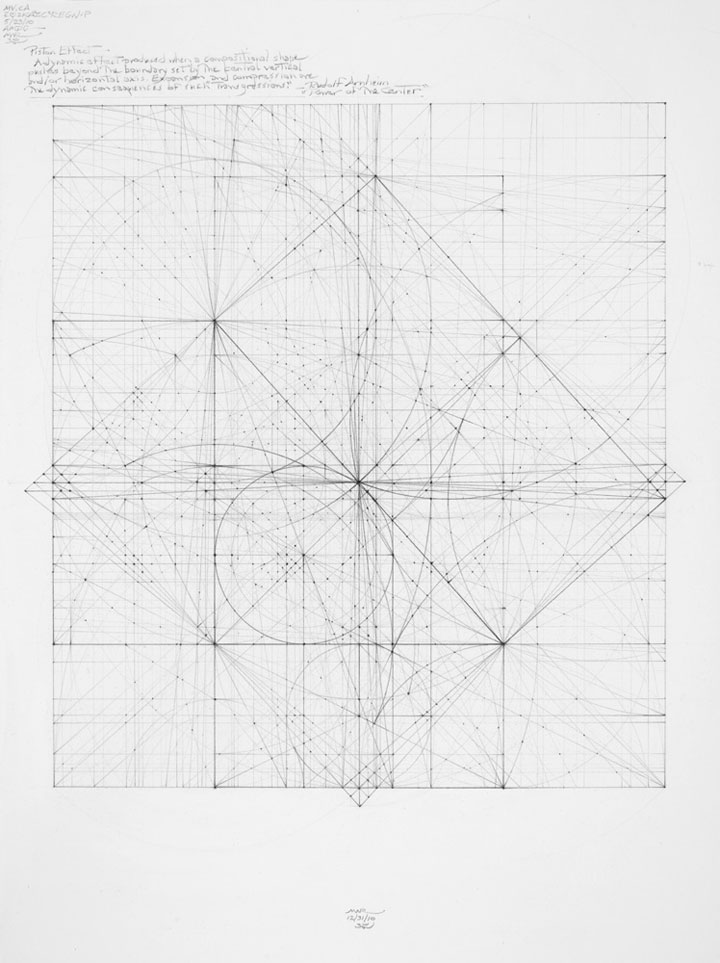 The 1.111 ratio is found in the diagonal cross-section of the Great Pyramid, along its sloping edge, called an “arris.” I let chance into the construction of this grid as a nod to John Cage’s work. The 1.111 ratio belongs to no geometric families. It is an orphan, or something apart. Simply, it cannot be generated from a square; at least no construction is known to exist at this time, as far as I know. I might look into the possibility. 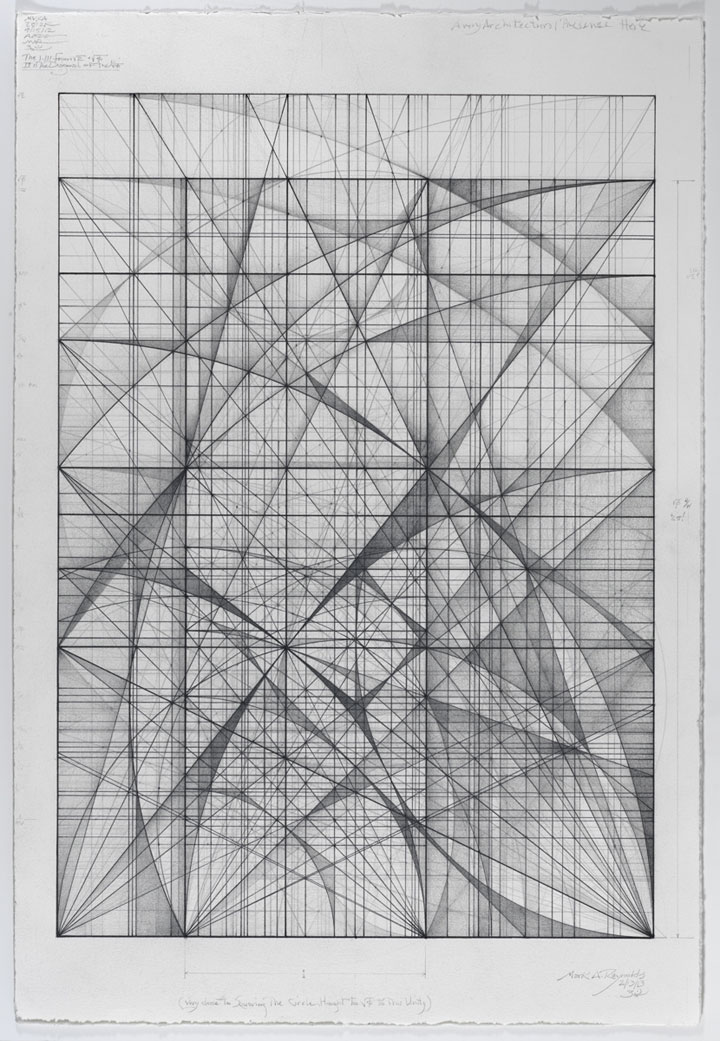 EG: Are there any artists that have particularly influenced you?

MR: I  attended art school in the sixties, when there were influences coming into the West from India and the East. Mandalas, Persian carpets, and things of this nature started showing up in my world and my artwork. At the same time, I had a love affair with Raphael, Leonardo, and other Renaissance masters. I also loved Degas. They all drew so beautifully.

My classmates were into Abstract Expressionism and Pop Art, yet I found myself increasingly interested in geometry. My interests deepened when I learned that there were geometric grids used for compositional purposes by some of the masters, and that there was symbolic and spiritual meaning behind these geometric systems that went back to ancient cultures, especially the Egyptians. I began seeing the works of Ad Reinhardt, Agnes Martin, and Kazimir Malevich. I even learned of Hilma af Klint. Minimalism and Hard-edge styles were beginning to have their influences on me as well.  All these things blended together, resulting in the work you see today.

EG:  In an artist statement you wrote for your contribution to The Drawing Center’s 2012 auction, you talk about “accidental geometry.” Can you elaborate on this? What does it mean?

MR:  The drawing I donated (from my Minor Third Series) has an unusual geometric arrangement of points on the reverse side of the drawing, created by compass pin holes that I used to make the construction on the front. I proceeded to make an irregular geometric grid using these holes. Rather than being concerned with exactitude or any specific grid or ratio, I had an opportunity to just connect the dots so to speak, in a carefree way, to relax from the rigors of the construction of the drawing on the other side.  I also drew a couple of faces in this freestyle grid as well, briefly returning to my earlier work. I figured that no one was going to see the image once the drawing on the other side was mounted and framed, but the drawing ended up looking pretty interesting, so I asked the framer if there was some way to make the frame so that both sides of the sheet could be viewed. And that’s what we ended up doing. It was a bit of a hit. I’m glad I was able to contribute to the auction.

I used to put representational images into grids, using the grid as a projection screen to draw certain images that seem to be in the geometry. People often wanted to know about the narrative that went into that imagery, but I myself didn’t really know. I became exhausted trying to explain it all, and decided to leave the representation out, somewhat akin to writing symphonies rather than operas. I haven’t regretted the decision.

EG: Do you often deal with the contrast of rigor and improvisation in your work?

MR: As a rule, I work with precision, striving for perfection in the Platonic Absolute way.  I’m looking for relationships within geometric elements that have never been seen or found by anyone before, similar to improvisational jazz, making the resulting structural forms as beautifully rendered as I can. When I find a relationship within the geometry I’m working with, I want it to be true and accurate within the limits of pencil and paper. I want these unique relationships to be seen and appreciated by the viewer, so that he or she becomes aware of geometry’s power, beauty, and magic.