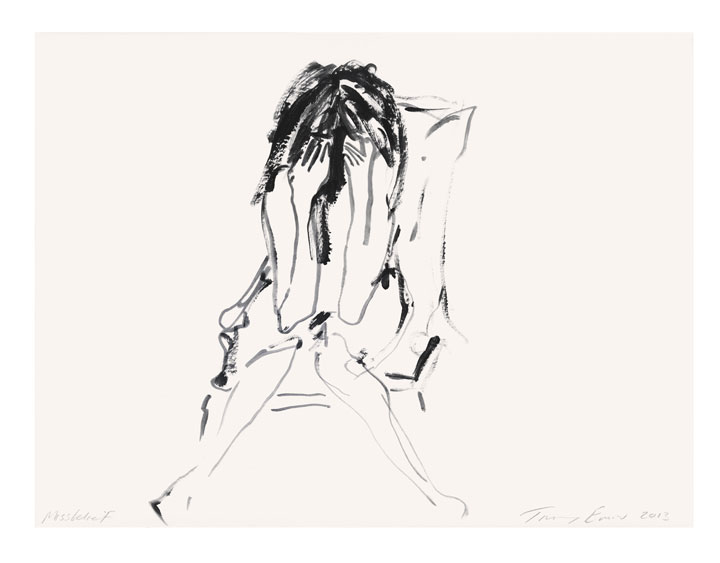 Though not often known for subtlety in her work, British provocateur Tracey Emin offers a refreshingly more mellow output in her latest body of drawings, presented in a two-part exhibition at Lehmann Maupin gallery. On view through June 22 at the gallery’s Chrystie Street location is the artist’s personal collection of gouache and pen on paper Lonely Chair Drawings, a series of self-portraits in which Emin depicts a solitary female figure with an expressiveness that is sketchily wielded.

The over twenty images are drawn from photographs that Emin took of herself posed nude in a chair at her home in France (where she works alone, and rarely wears clothing), and evoke poignant feelings of longing and solitude. Using an economy of means and improvisational gestures, Emin’s spidery ink beds foreground the process of looking, charting the artist’s changing perception of herself.  Emin is her own work in progress, stating, “I’m thinking what I look like in my house in France, but first off, what I look like, how I feel sitting in this chair from the kitchen, then from just slightly outside it, beside the ceiling. Then from outside the house looking down, then from way up in the stars, like into infinity, looking down at me, and God I’m tiny. And I’m really lonely. That’s what I look like.” [i] 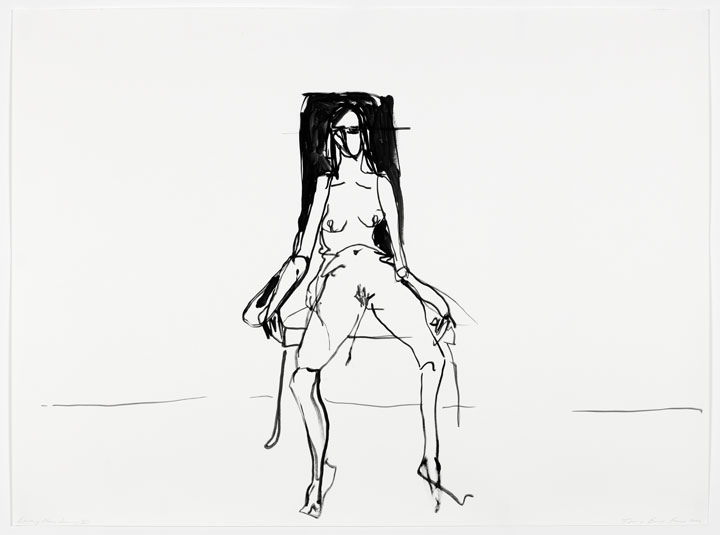 In this, her art is not a female body object drawn by men as has been done for millennia; it is a woman drawing on herself. Emin’s nonchalance with nakedness—forms ecstatic, dreaming of sex, curled up and vulnerable as in More Isolation (2012), or splayed as in Lonely Chair Drawing II (2012)—sheds light on the way we view our own bodies and opens up to a purified way of understanding the world. Sequential in form, the Lonely Chair Drawings present a diaristic model of drawing that is personal while outward-looking. Rendered in a distinctive style at turns loose and bold, rigorous and swift, the works are profoundly intimate yet remain remarkably accessible.