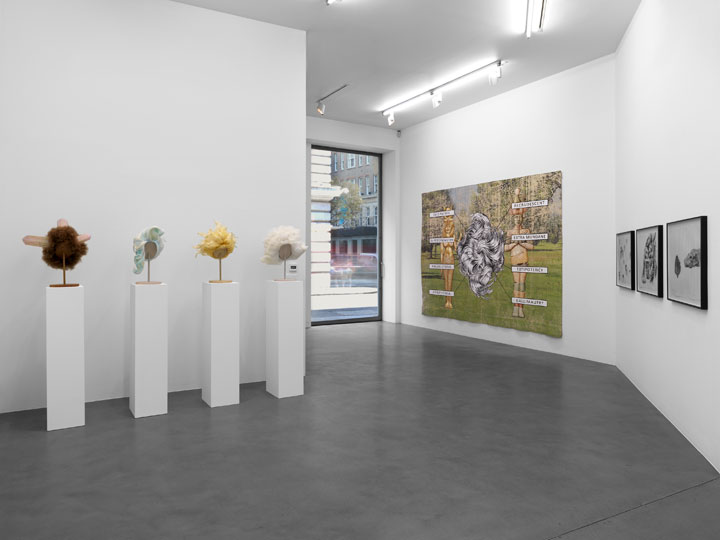 Jim Shaw once claimed to follow the example of Marcel Duchamp’s enigmatic diagram The Bride Stripped Bare by Her Bachelors, Even (The Large Glass), 1915–23. Just as The Large Glass eludes interpretation and operates as a springboard for multiple future endings, Shaw’s exhibition at Simon Lee Gallery in London through March 26 stages a surreal scenario where cryptic associations make up an absurd visual language.

The exhibition brings together a postmodern religious cult, comic books superheroes, dream objects and wigs across a suitably hectic array of media, from paper to canvas, video and sculpture. Upon entering the gallery, Anal/Isis (2012) greets the audience with a typically Duchampian pun. The work is a large-scale diagram painted on the muslin of a found theatre backdrop and features two Egypto-Assyrian guardians standing on each side of a central wig-totem. From this departs a series of lines connecting to obscure key words like ‘gallimaufry’—which means, quite to the point, “a confused jumble of things.” An incomprehensible diagram, Anal/Isis parodies religion (Shaw recently funded the cult of Oism), just as much as it caricatures the psycho-analysis of Freud’s Totem and Taboo (1918). Both credos are reoriented here toward the fetish of the scalp. 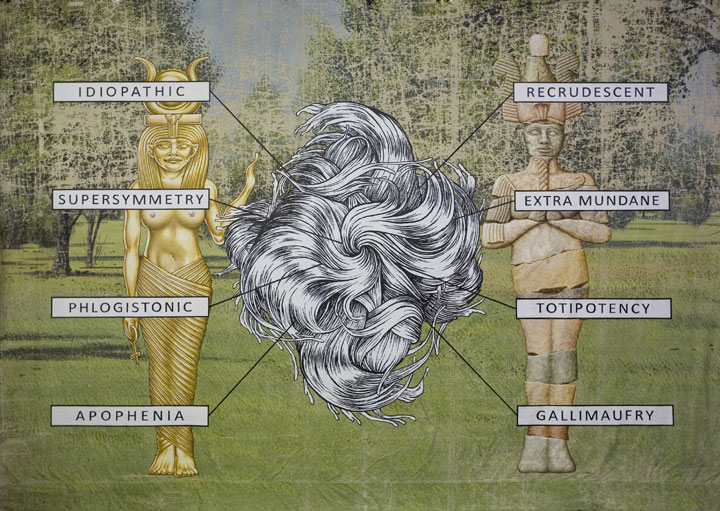 Shaw has always been interested in representing the madness of the modern subconscious on his own terms. Psychosis permeates his characteristic works with pencil and airbrush on paper, a few of which are on display here. For example, Appliance with a Big Foot Parting the Red Sea (2013) presents a painstakingly hand drawn man with a schizoid appliance-head, against a miasma backdrop of dark pink airbrushing that evokes simultaneously a visceral interior and a monstrous projection.

The allusive conflation of the bodily and the graphic—another Duchampian export—returns across the exhibition through the surreal leitmotif of the wig. For what is hair if not the literal embodiment of the line? An intricate bundle of hair surmounted by an unexpected vaginal fissure figures in a totemic position at the center of Dream Object (‘I came back to the studio and Scott had added these three dimensional…’), 2012. This painting belongs to a series of works that Shaw made after his night dreams. Even while parodying the Freudian enterprise, then, he retains something of its method. Like Anal/Isis, the dream-object was painted on a recycled theatre backdrop. However, this time Shaw added to the original muslin two cutout extensions, which pend from the picture plane onto the floor like hair locks or eye bulbs, further confusing the limits of the ‘body’ of the image. 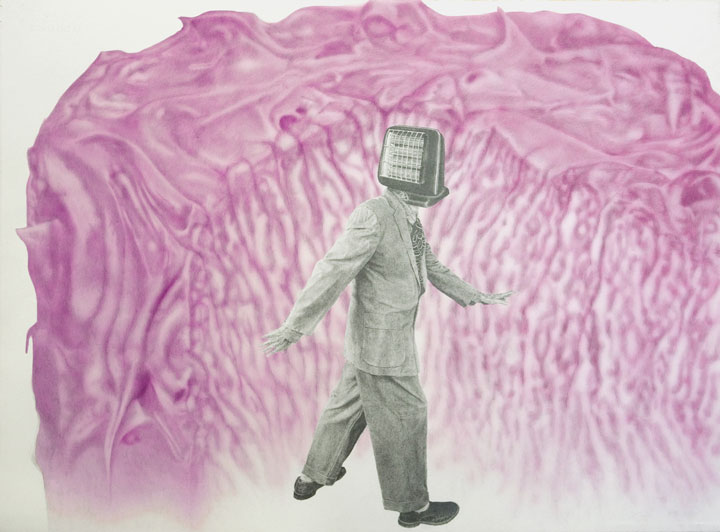 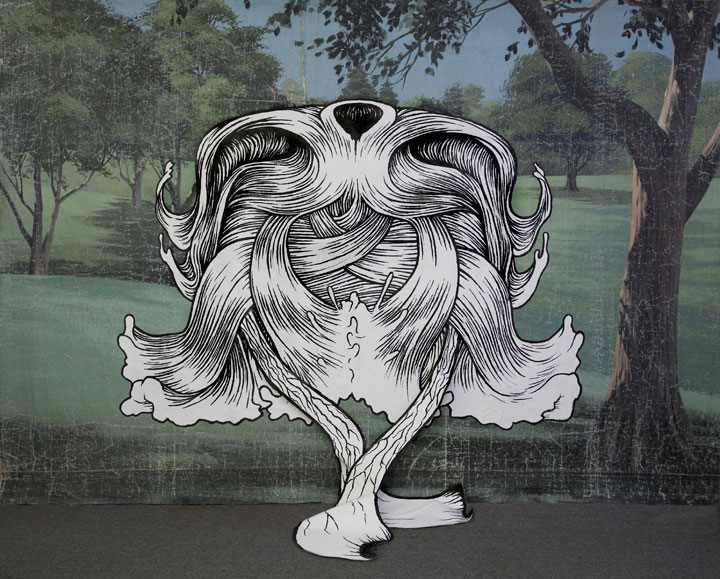 Jim Shaw, Dream Object, (“I came back to the studio and Scott had added these three dimensional…”), 2012. Acrylic on muslin with cut-out acrylic on muslin attachments, 96 1/4 x 136 inches. Image courtesy of the artist and Simon Lee Gallery.

Although it counts as painting, Shaw’s stroke is graphic in the manner of comic book illustrations. It is only appropriate then, that Dream Object hang between two smaller drawings of headless superheroes, which Shaw made after the same dream. By interspacing drawing with paintings, videos of performers wearing retro-futuristic wigs, and a sculptural installation of the very wigs caught on camera, this exhibition vividly incarnates Shaw’s characteristic ability to surcharge the graphic line with psycho-corporeal intensity.