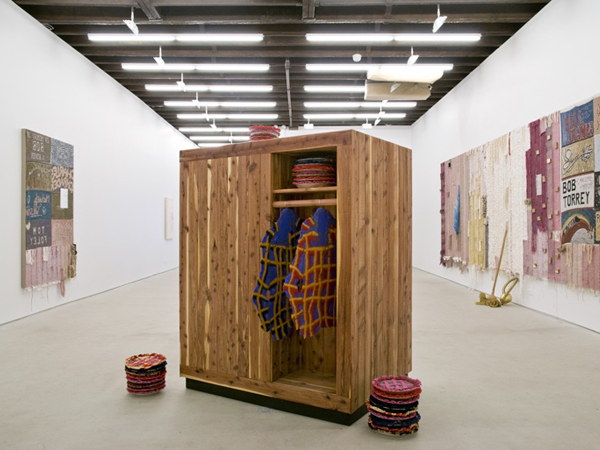 For the artist Josh Faught, the representation of queer subjectivity is inextricable from other forms of cultural identity. The concurrent comfort and terror of suburbia, for example, have loomed ever larger in his artistic lexicon, along with self-help culture and its attendant hypochondria. These issues are linked through Faught’s commitment to under-recognized, community-based practices like weaving and crocheting—skills he learned partly from his grandmother and great-grandmother, but also from classes at summer camp. He has said he learned to weave before learning to draw, and it’s clear that working in textiles allows him to intertwine the conceptual threads of his practice.

In Longtime Companion, Faught’s current exhibition at Lisa Cooley, however, the importance of the line “drawn” in fabric becomes evident. Large rectangular compositions of woven hemp and wool are mounted, painting-like, on linen. But their construction hardly holds to a grid: sequins, birthday cards, letters, protest buttons and other kitschy adornments interrupt the work’s surface, and the ragged, loopy lines Faught binds into the fabric make the hand of the artist much more evident than in most loomwork, which often reveals the skill of its creator through the impeccable intricacy of combined stitches. On each work’s surface, thick pockets of fabric cluster haphazardly, recalling both cocoon-like protective shelters and sinister, impenetrable crevices. Again, the zigzagging lines “drawn” into the fabric corrupt its smooth vertical/horizontal grain, adding depth to the artist’s investigation of the ominous aspects of comfort. 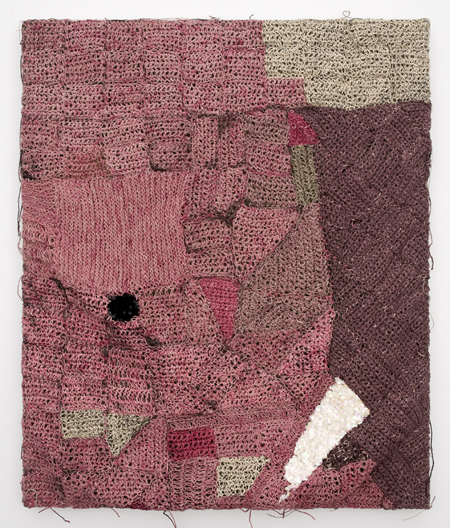 Faught has expressed an interest in “support structures,” whether physical — as with the trellis-like stands on which some of his wall works rest — or psychological, as with the trove of self-help books, inspirational pins and even fabric renditions of pies (which somehow look both cozy and delicious) arranged throughout the gallery. Other elements of the exhibition include two cabin-like cedar structures partially wrapped in large-scale woven reproductions of PFLAG (Parents, Families and Friends of Lesbians and Gays) newsletters. These decades-old, earnest documents of a support community in formation are juxtaposed with stacks of best-selling crime novels with titles like The Stranger Beside Me. And then there are Faught’s reproductions of panels of the AIDS Memorial Quilt—an ongoing, collective project commemorating individual lives lost to the disease—interspersed with woven chapter titles from an emergency preparedness book: “Difficulties Breathing,” “Burn Care,” “Police at the Door,” etcetera. The show oscillates dramatically between the conflicting potentials for sheltering spaces and comforting objects to protect and nurture, or to obscure and disguise.

Bunches of thick fibers, unraveling threads, knots that secure and bind — Faught’s draughtsman-like handling of his fabrics repeatedly nods to traditions of drawing. Each stitch, which might have been rendered mechanically, is instead imbued with contradictory and surprising meanings. 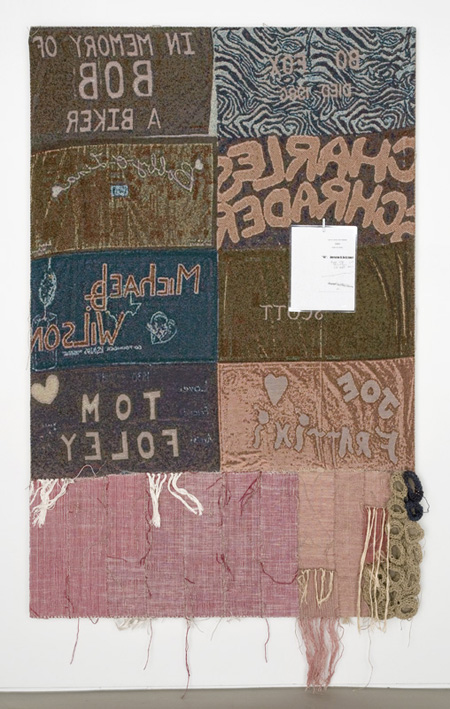